Ceiling fans have been a staple in most Australian homes for decades, and while they may have been overshadowed by air conditioners, a cool breeze from the trusty ceiling fan can be a true blessing on those hot summer nights. But while they’re the unsung hero of the warmer months, are they as handy during the winter months? Or are they resigned to simply collect dust until jumpers and trackies give way to singlets and stubbies again? To help settle this mystery of life – and potentially save you big on your next electricity bill – we look at whether you can use a ceiling fan to heat your room.

How do ceiling fans work?

Before we plunge into the question on everyone’s lips, it’s best to first look at how a ceiling fan works. Ceiling fans work via a motor installed in the fan itself, which in-turn rotates the blades to create the cooling effect we’ve all come to associate with the humble ceiling fan. While it may seem that the fan is cooling the room, it’s actually just circulating air that’s already there, helping the hotter air to rise above the fan and make the room cooler – or at least seem cooler from where you’re sitting or standing.

So, if this is what happens when blades move in a counterclockwise direction – can a fan make the room feel warmer by spinning anti-clockwise?

How do ceiling fans make a room warmer?

The magic of thermodynamics tells us that ceiling fans can definitely warm up a room since hot air rises. This means the temperature at ceiling height is generally higher than it would be at a lower height, such as where you sit on the couch or stand in the kitchen.

How much energy does the heating setting on a ceiling fan use?

Is it worth using a ceiling fan in winter? 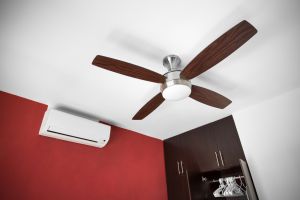 Depending on what climate you live in, and how well insulated your house is, switching your ceiling fan to circulate warm air may be all you need to help you feel warm and toasty during the colder months, although most of us will prefer to turn the heater on or grab another jumper just in case.

A ceiling fan may be the cheaper alternative to heating a room, but its effectiveness is also somewhat limited in comparison to air conditioners and heaters, meaning if you’re really feeling the cold, a ceiling fan may not help stop your teeth from chattering. But if you’re only looking to get a bit of air circulation and bump up the temperature slightly, a ceiling fan may just be the option for you.