Dyson has brought us many game-changing inventions like some of the world’s most powerful cordless vacs, the cult-favourite Airwrap, and the Dyson Pure Hot+Cool, but its latest gadget may have missed the mark entirely.

The brand has announced the launch of something NOBODY asked for – a wearable device called the Dyson Zone – marketed as ‘air purifying headphones’. The company has confirmed this is a real product and not an April Fool’s Day joke. 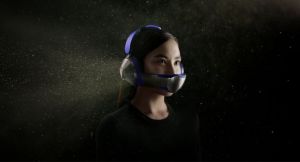 The integrated noise-cancelling headphones are fitted with a ‘personal purification’ face shield to go over your mouth and nose and purify the air you breathe in and out. It’s said to filter out 99% of particles as small as 0.1 microns, including pollen, bacteria, and fine dust, as well as gas pollutants. It does it all while delivering ‘immersive high fidelity sound’. The headphones are also fitted with sensors that detect how fast the wearer is moving to automatically adjust the airflow between three intensity levels.

The odd gadget took six years of research and 500 prototypes before it was finalised and released, according to the Dyson website. It was designed to combat air pollution and is said to be able to filter all kinds of indoor and outdoor pollutants.

The Dyson Zone is the brand’s first wearable device and is set to launch in Australia in the coming months. Information on specific dates and pricing is yet to be released.

However, the new device has already been branded ‘the worst tech product of 2022’ and just downright ‘bizarre’. Twitter is already ablaze with commentary, much of which is nothing but flattering.

“This is the most bizarre thing I’ve seen EVER in my life,” one Twitter user said.

“Are these for the Mad Max remake?” another joked.

So the Dyson zone is a real thing 🫤 pic.twitter.com/wlQKx7u6FI

The future gets dumber every day. Does anyone mind if I reset to about 1970 and let us try again?https://t.co/lh9qxXvJFF