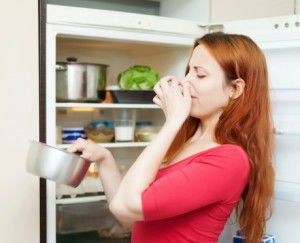 One in four Australian households put off cleaning their refrigerators for months at a time – and it could be making people sick.

A new Canstar Blue survey has found that 30% of Aussie households are failing to regularly clean their fridges, with 7% of them admitting they can’t even remember the last time they did so.

In all, almost three quarters of Aussies are failing to clean their fridge on a weekly basis, as recommended by experts.

The survey, of 776 adults, found that two in five regularly remove mouldy food from their fridge. And almost half of Gen Y respondents said they often throw out bad food.

According to sustainable food advocate Foodwise, Australians discard up to 20% of the food they purchase and $8 billion worth of edible food is thrown out every year, with fruit and vegetables most commonly wasted.

And experts warn that keeping too much food in the fridge and not storing it properly could be making people unwell. Almost 1 in 3 Australians are affected by food poisoning every year, according to Marjorie Harvey, founder and director of Australia Food Hygiene Services. She believes too many people are ignorant to the associated health risks of having a filthy fridge.

“It could also be larger packaging these days that does not allow for the ingredients to be consumed in time,” says Mrs Harvey. “People don’t like throwing food out so they keep it too long. Busy lifestyles don’t allow for fridge cleaning to be a priority.

“There are approximately 7 million reported cases of food poisoning each year in Australia, with 14% of them from the home. Most people do not report food poisoning symptoms to the Health Department, let alone if caused at home. Therefore there are most likely far more cases than reported.

“Food poisoning can make people very sick and if vulnerable, such as a very young child or an aged person, the symptoms can be life-threatening. Many cases cause hospitalisation, adds Mrs Harvey. “The fridge is one of the highest risks for contamination of food as it is holding perishable foods that must be stored below 5 degrees Celsius and consumed or disposed of by the expiry date. Many people do not know the temperature of their fridge, which may compromise use by dates if food is not being stored at the correct temperatures.

“Fridges should be cleaned out weekly to help control the above risks as bacteria loves old food, moisture and dirt. Fridge racks and under vegetable containers can harbour bacteria from food spills and should also be included in the cleaning.”

Just a quarter of those questioned said they cleaned their fridge on a weekly basis and roughly the same number said they do so monthly. The survey saw Electrolux receive Canstar Blue’s Most Satisfied Customers Award for Refrigerators.

Mrs Harvey warns people to be careful where they store raw food products like chicken, meats and seafood as they could drip onto ready to eat foods, and left over canned food should never be left in the original can. It should be transferred into a separated sealed container, refrigerated and consumed within a few days. People should also be sure to rotate foods like fruits, vegetables and eggs, ensuring old foods are consumed first.

“Frozen food also has an expiry date,” she says. “Food prepared and frozen in the home should only be frozen if freshly prepared or cooked, or with at least two days use by date if purchased fresh. The time food takes to become rock hard frozen can depend on the size. Bacteria grows slower under refrigeration and is dormant once frozen rock hard, although care must be taken as it will still need an expiry date to account for the air that compromises food each time the door is opened.”