Microwaves have come a long way in a short space of time. Not so long ago it was also about zapping the hell out of your food until it was hotter than the sun. Sure, the inside might still have been cold, but by the time you found that out, you just wanted to eat your food. Fast forward a few years and now we have microwaves that can not only heat your food, but actually brown and crisp it just like cooking in an oven would. That brings us on nicely to the Quick Touch Crisp from Breville.

What is the Quick Touch Crisp by Breville?

When it comes to appliances like blenders and microwaves, Breville is one of the pace-setters. Its Quick Touch range of microwaves is hugely impressive, and the Quick Touch Crisp is the company’s latest innovation in this space. There’s a reason why world-famous chef Heston Blumenthal is happy putting his name and face to the Breville brand.

The Quick Touch Crisp is a powerful inverter microwave that brings finesse to microwave cooking. And the key word here is cooking, rather than heating. The integrated crisper pan and convection grill take the possibilities beyond the soggy to cater to far more cooking needs.

How does the Quick Touch Crisp work?

An in-built preheat function and a full range of 10 power levels from 10% to 100% means you don’t need to worry about your food exploding or having a frozen lump in the middle of the burning-hot outside. The Quick Touch Crisp bakes and browns food like an actual oven does, but in far less time. Pre-programed settings for specific tasks, such as melting chocolate, baking potatoes, toasting sandwiches and cooking pizza, makes it easy to find the right settings for the right job. You can also program your own settings so that you can microwave your food the way you like it without fiddling around with settings every single time.

With all of these menus and options, you would think the Quick Touch Crisp would be complicated to use, but it’s simple. There are minimal buttons to overwhelm you, with the digital screen guiding you through most of the menu options. Shortcut buttons to the most common tasks sit just inside the door frame. If you find your food needs a little more time, you need only touch the ‘A Bit More’ button to seamlessly add a few more seconds to your cook time.

The child safety lock can protect little aspiring chefs from harm, and the independent kitchen timer is a great asset when you’re multi-tasking. Crisp, brown, roast, and toast at the touch of a button with Breville’s Quick Touch Crisp, and you’ll never settle for soggy reheats again. 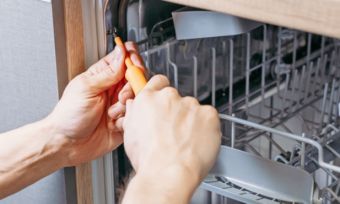 How much does it cost to install a dishwasher?

Air conditioner on or off? Don’t sweat over peak time energy prices