Sometimes we hear that drinking coffee is good for you, and the next day we hear that it’s bad for you. But now we know exactly how much coffee you can drink every day without experiencing any negative side effects.

How much coffee can you drink?

According to a significant study completed in America, adults can safely consume up to 400mg of caffeine in a standard day, which translates to roughly four cups of coffee.

Researchers from the International Life Sciences Institute released a paper to the journal of Food and Chemical Toxicology in April 2017, titled: ‘Systematic review of the potential adverse effects of caffeine consumption in healthy adults, pregnant women, adolescents, and children’. You can read it here.

Since 2003, more than 10,000 papers have been published detailing the effects of caffeine, and this study analysed over 740 of them to determine exactly what caffeine does to our bodies.

The study found that healthy adults can consume up to 400mg of coffee a day on average without experiencing negative side effects, as long as this limit isn’t regularly exceeded. Drinking more than this can lead to migraines, insomnia, upset stomachs, increased heart rates and more, and the factors that can influence ones sensitivity to caffeine include:

This is good news for Aussie coffee lovers, as drinking several cups of coffee throughout the working day can reduce cognitive decline and can help keep dementia away later in life.

The researchers of this study wrote that the purpose of this research is to “provide evidence that furthers our understanding of caffeine on human health, and to provides the research community with data and valuable evidence to support the development and execution of future research on caffeine safety”.

How much coffee can pregnant women drink? 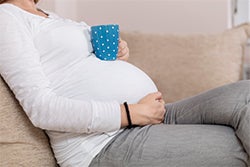 Pregnant woman can consume a maximum of 300mg of caffeine, or roughly three cups of coffee, a day. This compares to 400mg for other adults. Women who consume more than this amount are more at risk of miscarriage during the weeks leading up to conception.

The 300mg limit is just that – a limit – and the paper recommends that pregnant women generally try to limit their coffee intake to just two cups a day at most, just to be safe.

How much coffee can children drink?

The other key group the study looked at was children (adolescents aged from 3 to 12). Children in this age group are extremely susceptible to the negative side effects of caffeine, and as such should be limited to 2.5mg a day at most. While most adolescents aren’t chugging coffees at work like most adults, they do get their caffeine through other means.

Where do children get caffeine from?

According to Virtual Medical Centre, energy drinks and fizzy drinks are where most children get their caffeine from. In the United States, 55% of the caffeine children consume comes from cola beverages, 30% comes from tea and 14% comes from chocolate.

In 2007, Australian 9-13 year olds consumed an average of 8.1mg of caffeine a day, while 2-3 year olds took in 3.4mg. This is too much, and too much caffeine in children can have disastrous consequences.

Side effects of excessive caffeine consumption in children

Unlike what many people are led to believe, excessive caffeine consumption in children does not cause hyperactivity, if the Virtual Medical Centre is to be believed. Caffeine actually reduced aggression and impulsivity in children.

What are the negative side effects of caffeine?

While the study shows that consuming the recommended amount of caffeine will not affect your health, caffeine is technically a drug, and too much caffeine (500-600mg a day) can cause some of the following side effects:

A lot of these side effects are also present in children – it’s just that adults have a higher tolerance to caffeine.

Caffeine can cause addiction 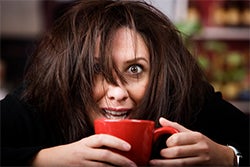 Given the positive effects that caffeine can have as a stimulant, excessive coffee drinkers can start to experience addiction if they have too much. Medical news today states that, as with any drug, some people can become physically dependent on caffeine, and an absence in coffee consumption can lead to individuals suffering from caffeine withdrawal.

The typical symptoms of caffeine withdrawal include:

So be careful not to have more than four cups of Joe a day!

How much coffee do Australians drink?

While we’re sure a lot of you reading this right now love your coffee (you might even be drinking one right now!), Australia is not the coffee loving nation we think we are.

According to Fairfax media, Australia ranks a lowly 42nd in the world when it comes to coffee consumption. Sorry inner-city hipsters! The data shows that the average Australian consumes approximately 3 kilograms of coffee per year, which is much less than their overseas counterparts:

Our own Canstar Blue data shows that almost half of Australians have coffee instead of breakfast and that 63% of us can’t function without one.

Roughly 75% of Australia’s annual coffee consumption is from instant coffee, far outstripping the consumption of barista brewed coffee. It seems that Australia is still very-much a developing nation when it comes to latte-sipping. Bit given the potential health effects of having too much coffee, maybe that’s a good thing!

What is in a cup of coffee?

If you are just one of many who downs 3-4 cups of coffee in an average working day, then it would probably be a good idea to know what you’re ingesting into your body. While the ingredients can differ slightly depending on what type you’re drinking, the recurring ones are as follows.

And of course, there is whatever you choose to put in your coffee, such as milk and sugar. We would hope that we don’t have to explain what those are!