For coffee lovers, fresh coffee beans and coffee ground can be one of the best things about coffee, as the smell – and the promise of a good cuppa – is enough to bring a smile to your face. But when it comes to used coffee grounds, chances are most of us don’t give them a second thought, simply chucking them in the bin. But what if you could be using them for other uses around the house and garden? If you’re looking to be a bit more environmentally sustainable, or you’re just interested at what coffee can’t do, find out what to do with your used coffee grounds in this Canstar Blue article.

What are used coffee grounds? 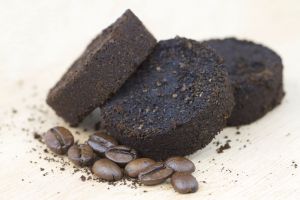 What can used coffee grounds be used for?

While initially thought of as just waste, used coffee grounds have been found to be useful for a number of areas, particularly from an environmental point of view through use in the garden as fertiliser or compost. Other potential uses for used coffee grounds include as a deodoriser, health and skincare as well as a potential DIY repair remedy, although you may have to take some of its uses with a grain of salt, as the effort may not be worth the payoff.

Used coffee grounds for the garden 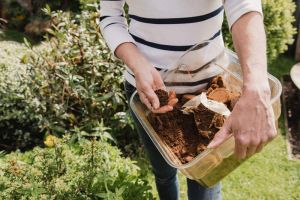 As arguably the biggest use for used coffee grounds, using them as fertiliser in the garden has become an increasingly common, and effective, method of sprucing up the greenery around your home. As coffee grounds contain nitrogen, calcium and potassium, along with plenty of other nutrients, the soil becomes infused with these additional nutrients, allowing your plants to grow through the added nourishment. As a bonus, worms are also big fans of coffee, meaning you can expect a few more worms in your garden, which in turn help to break down compost, ensuring your plants get additional nutrients.

Used coffee grounds as a deodoriser 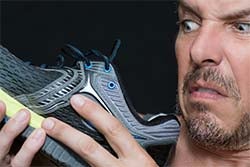 Coffee is great at absorbing odours, in addition to exuding its own pleasant smell. You can use the grounds on their own, or mix them with bicarb (aka baking soda) for an odour-absorbing boost. You can set up a coffee deodoriser as either an open container (provided it’s placed somewhere safe where it won’t get knocked over) or as an air freshener made by stuffing the grounds inside a sock, stocking, or other fabric to hang up or toss into a cupboard.

Places you can use coffee grounds as a deodoriser include:

Shop coffee machines with some of our referral partners^ 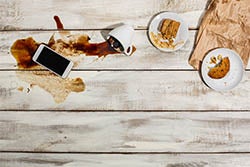 Sometimes stains are a good thing. Coffee is great at producing a weathered golden colour in pretty much any material that soaks up stains, such as timber and cloth. Used coffee grounds soaked in water can dye and ‘age’ your fresh furniture for a simple and inexpensive alternative to buying real antiques. You can also use the same method to reduce the appearance of scratches in wooden floors and furniture.

Tough build-up in pots and pans and on surfaces can be difficult to budge. Add some coffee grounds into your cleaning to add a grit that will help soak up and really make that grease budge. Coffee grounds are abrasive but not so harsh as to damage most surfaces. Just double check whether your cleaning target will be susceptible to scratches or stains from coffee grounds. 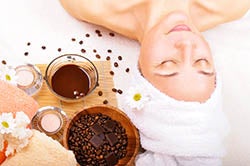 Coffee grounds can make a great natural exfoliant. While there are plenty of recipes around for coffee soaps and scrubs, at its most basic, freshly-used grounds mixed with a bit of warm water or skin-safe oil can do a pretty solid job at scrubbing away dead skin.

You can also use coffee grounds to make salt scrubs, soap bars, and other kinds of scrubs. If you use a lot of hair product and want to get rid of build-up, used coffee grounds rubbed through your hair can help break apart residues without damaging the hair itself.

Make sure to dry out used grounds before using them in any recipes that you’ll want to store for more than a day, as a mouldy face scrub doesn’t sound like much of a beauty treatment.

Drying coffee grounds and how to do it

After creating some used coffee grounds by pounding a few cups of coffee, you’ll have to rein it back a bit and wait for your coffee grounds to dry before you try any of the above. Wet coffee grounds will eventually start to decompose if you don’t use them straight away, with moldy coffee grounds only good for the compost heap. For the options listed above that don’t involve the garden, you’ll want to dry out your used grounds as soon as possible after using them.

Drying out used coffee grounds is thankfully pretty easy. Just spread them out in a thin layer on a tray lined with a few sheets of newspaper or baking paper, and leave them in the sun to dry out. Changing the newspaper and turning the grounds can make the process more effective. You can also do this in the oven, but if it’s a nice sunny day it’s best to save the electricity. Once your coffee grounds are completely dry, you can put them to use or store them in a sealed container for later.

Are used coffee grounds worth saving?

Whether it’s worth saving your used coffee grounds from ending up in the bin will ultimately come down to what you want to do with them. If you’re a keen green thumb looking to spruce up your garden, or looking to be a bit more environmentally-conscious, saving your used coffee grounds for your plants can be a fantastic way to help make the world go round. But if you don’t care much for the garden, or you’re not game to try some of the cleaning or self-care options listed above, no one will blame you for disposing of them in the bin. However, if you regularly drink coffee and are just curious about used coffee grounds, trying a few of the methods above may help you find a new project to tackle.