The South Korean tech giant announced that from 2021, all Samsung TVs will come with a remote control that can be recharged by indoor light, outdoor light or USB. The latest innovation from the brand is aimed to avoid wasting what’s predicted to be 99 million AAA batteries over seven years. Plus, each remote will be made from recycled plastic. 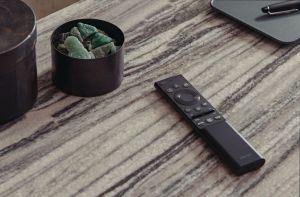 Director of Audio Visual at Samsung Electronics Australia, Hass Mahdi, said Samsung will also use its own ‘eco-packaging’ design to wrap up all of the brand’s 2021 ‘Lifestyle’ TVs and most 2021 Neo QLED models. According to Samsung, this could upcycle up to 200,000 tons of corrugated boxes each year. The global manufacturer additionally promised to use less oil-based ink by reducing text and images on its packaging.

“In 2021, Samsung’s eco-packaging solution will be brought to all TV products to help responsibly manage waste created from product purchases by allowing customers to repurpose TV boxes into small-scale pieces of furniture,” said Mr Mahdi.

What else is new with Samsung’s TVs? 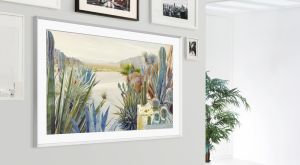 Samsung is making another leap with its new display technology − Neo QLED − which will be added to its flagship 8K (QN900A) and 4K (QN90A) models. The upgrade has allowed the company to reduce the width of its 2021 TV range by half the size, according to the brand.

Since becoming the first company to bring 8K TVs to Australia, Samsung has produced a new Infinity One Design that gives households a ‘nearly bezel-less screen’ for a more immersive viewing experience. 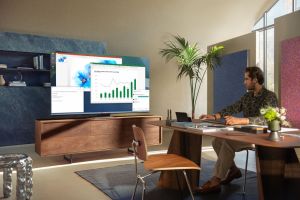 A few of the smart features included in Samsung’s latest Neo QLED 8K and 4K TVs include:

Samsung TVs will be slimmer than ever

Samsung has retouched its flagship ‘The Frame’ TV to make it even thinner, squeezing it to a size that’s apparently 46% slimmer than the previous iterations of the model.

Since launching back in 2017 to offer households a television that was more than just another piece of tech, families with The Frame can also choose from more than 1,400 artwork pieces when deciding what should appear on the screen when unused.

The new attachable bezel options on The Frame will come in five colour options and two customisable styles, including Modern and Beveled. Similar upgrades will also be made to other models in the range, including The Serif, The Sero, The Terrace and The Premiere.

Samsung TVs more accessible to everyone

Samsung’s 2021 TV line-up will also use Artificial Intelligence (AI) to help make watching television more accessible to people with hearing impairments, the deaf, people with low vision and the blind. Some features include:

*Prices are taken from retailer, correct as of January 2021.