Do you live in SA and are looking for a better electricity plan for your home? Compare electricity providers, plans and rates in SA with Canstar Blue.

Show Important Notes^* Hide Important Notes^*
* Overall satisfaction is an individual rating and not a combined total of all ratings. Brands with equal overall satisfaction ratings are listed in alphabetical order.
^ By clicking on a brand or ‘details’ button, you will leave Canstar Blue and be taken to our referral partner to compare. You agree that Canstar Blue’s terms and conditions apply to this referral. If you click on a brand that our referral partner does not cover, you will be taken to a brand page on Canstar Blue.
Canstar Blue research finalised December 2015, published January 2016. 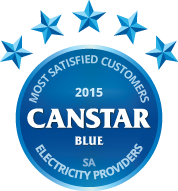 Lumo Energy is a retail subsidiary of Snowy Hydro Limited – the company that maintains the Snowy Mountains Hydro-electric scheme. Lumo Energy was founded in 2004 and has grown to become one of the biggest challengers to Australia’s big three energy companies – AGL, Origin Energy and EnergyAustralia.

Hands up if you like paying for electricity? No? Thought not! Let’s face it, power is a grudge purchase no one likes to make but as consumers, we’re well within our rights to expect an energy retailer that gives us a fair go over price, good customer service, and generally makes the whole process as easy to stomach as possible.

So, which energy company is offering the best overall deal in South Australia? To find out, we surveyed hundreds of electricity bill-payers and asked them to rate their current provider on all of those important factors. The results are in and we’re able to report that Lumo Energy was rated 5 stars in Overall Customer Satisfaction, receiving the Canstar Blue award for Electricity Providers in South Australia in 2015. Lumo Energy also received five-star reviews for its range of plans (including one that offers Velocity Frequent Flyer points), bill clarity and accuracy, energy efficiency advice, customer service, value for money.

Lumo Energy is a retail subsidiary of Snowy Hydro Limited – the company that maintains the Snowy Mountains Hydro-electric scheme. Lumo Energy was founded in 2004 and has grown to become one of the biggest challengers to Australia’s big three energy companies – AGL, Origin Energy and EnergyAustralia. Not only has Lumo Energy topped our satisfaction ratings for South Australian electricity providers in 2016, but it has been a consistently strong performer in other states, most recently topping our ratings for natural gas suppliers in Victoria. Lumo Energy promises more gas and electricity options “than you can poke a power pole at” and to treat its customers like human beings, not robots. In South Australia, Lumo Energy is the pick of the bunch at the moment.

About the South Australia energy market

South Australians have never had more choice over which electricity provider to choose, with increased competition giving customers the confidence to switch and potentially save. Since Full Retail Competition was introduced in South Australia in 2003 and electricity prices were deregulated by the state government in 2012, more and more licensed energy retailers have entered the local market. South Australia has been one of the leading states when it comes to energy regulation and competition, quickly following Victoria’s lead after it became the first state to introduce Full Retail Competition in 2002 and to lift restrictions on pricing in 2009. Previously, consumers will have received their power from one of Australia’s big three energy companies, but now South Australians have no less than 15 different electricity retailers to pick from.

Since electricity price regulations were lifted in South Australia in 2012, the energy retailers have been responsible for setting prices. All retailers are obliged to offer a ‘standard contract’ with regulated terms and conditions, but not prices. They also offer ‘market contracts’ that include some minimum requirements, but are otherwise customised by the individual retailer. These contracts are generally referred to as fixed term or fixed benefit period deals. There is also a requirement for each retailer to offer a market contract – for both electricity and gas – with no exit fees.

What does this mean for you?

Households are free to switch electricity providers, but not everyone is doing it. Our research shows that South Aussies are less likely to move their business elsewhere than consumers in Victoria or New South Wales, where prices are also deregulated. Just 31% of bill-payers in South Australia have switched in the last five years, compared to 42% in New South Wales and 50% in Victoria. The South Australian figure is closer to that from Queensland where there is less competition and just 29% of households have split. So why don’t South Aussies switch? We found:

Meanwhile, 4% are sticking with their provider because they benefit from a rewards program and 3% have concerns about losing their power supply if they switched.

How to switch electricity providers in South Australia?

There is a perception that switching electricity providers is a difficult thing to do, but the reality is that it’s never been easier. It’s a good idea to regularly review your current tariff and get quotes from other providers to see if they can offer you a better deal. There is a chance you’re not getting the best deal you can from your current provider, so give them a chance to rectify this. If you’re not satisfied with what you’re getting, it could be time to look elsewhere. If you do decide it’s time to switch, take advantage of the websites dedicated to helping you compare tariffs and prices. Look at the ratings table above and click on the name of the provider you’re interested in switching to.

Don’t be put off switching because of concerns about losing your power. Electricity is supplied to your home via the same network in your area regardless of the name on your bill. The energy retailers are simply the customer-facing business which handles your energy contract, sets the prices you pay and deals with your enquiries. Energy distributors get the power to your home. In South Australia, there is just one main distributor responsible for keeping your home on the grid – SA Power Networks.

What to expect from your energy provider?

With plenty of competition in the local market, South Australians shouldn’t settle for an electricity provider that isn’t living up expectations. Not only do you want a fair go over the price of power, but you should also expect your retailer to provide clear and accurate billing information, advice on how to keep bills down to a minimum and good customer service when you have an issue to raise. So what matters most to bill-payers in South Australia? We found the drivers of customer satisfaction to be as follows:

Interestingly, the range of plans on offer from an electricity provider is more important to consumers in South Australia than those in any other state. Lumo Energy boasts that it offers a significant number of options to customers and scored a five-star rating in this area, as well as every other research variable.

Canstar Blue commissioned Colmar Brunton to survey 6,000 Australian consumers across a range of categories to measure and track customer satisfaction. The outcomes reported are the results from customers within the survey group who live in South Australia, have an electricity account, and pay the bill – in this case, 472 people.