Baby Food isn’t just about great nutrition, it’s also about opening your child’s mind to a world of culinary excellence! Start that journey off on the right foot. 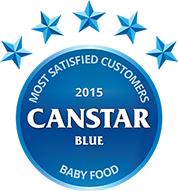 Rafferty’s Garden has taken out the maximum five-star rating for overall satisfaction as well as highest rated for flavour variety with five stars and ingredient quality.

Good nutrition is essential for your young child’s health; a diet filled with lots of nutrients will let your kids grow up to be strong and healthy, so it’s important to make sure your food choices are on the money. Fortunately, the quality of modern baby food is such that there are a range of suitable brands for you to choose from. Many brands have increased the quality and nutrition of their offerings, as well as sourcing their ingredients from sustainable and organic sources – with 61% of parents telling us they feed their baby organic produce, it’s definitely a good idea!

With all these brands on offer, you need some way to distinguish the best products out there; to help you decide, we’ve surveyed thousands of everyday Aussies and rated Australia’s baby food offerings based on customer satisfaction. Our criteria included value for money, ingredient quality and nutrition, variety of flavours and more, and having crunched the numbers, we’ve found ourselves a winner.

Rafferty’s Garden has taken out the maximum five-star rating for overall satisfaction, beating the likes of Aldi Mamia and Heinz on four stars as well as Only Organic and Nestle Cerelac on three stars. Rafferty’s Garden’s result saw it secure our Most Satisfied Customers award for baby food in 2015, reflecting its status as the brand Aussie customers rate the highest. The overall winners also scored several five-star ratings in different criteria – to find out more, check out our full breakdown.

Baby food you buy off the shelf needs to be worth the money especially if you’ve got a hungry child! Supermarket brand Aldi Mama has you covered here with a five-star rating for value, as does four-star achiever Heinz. Behind them came Rafferty’s Garden, Only Organic and Nestle Cerelac with three-star ratings for value satisfaction.

Variety of flavours and options

With 66% of parents telling us they spent more time preparing their baby’s food than their own, it’s perhaps no surprise that variety of food options is an important consideration for many. It was overall winner Rafferty’s Garden which was highest-rated for flavour variety with five stars, and they were closely followed by Heinz with four. Nestle, Aldi and Only Organic each scored three stars for satisfaction.

Use of quality ingredients

Every parent is careful about what they feed their child, which means quality, healthy ingredients are seriously important and stacks of sugar or preservatives are a big no-no. Rafferty’s Garden was once again the top scorer in terms of ingredient quality, with its large number of satisfied customers earning it five stars. Only Organic also performed well to achieve a four-star rating, making these two the brands of choice if you want nothing but the best for your kids. Also in the running were three-star achievers Aldi Mamia, Nestle Cerelac and Heinz.

Depending on how willing an eater your baby is, your method of feeding them might be the difference between a happy breakfast and having food all over the kitchen. Packaging variety in baby foods can be a big help here, with brands offering different containers such as squeeze packs and tubes in addition to regular tubs, tins and jars. Heinz has you covered if you’re looking for different packages, scoring five stars for variety in this segment. Other good options are offered by Rafferty’s Garden and Only Organic with four stars for packaging, as well as Aldi Mamia and Nestle Cerelac with three.

Ease of opening and dispensing

Unsuprisingly, baby food is designed to be absolutely foolproof to open so as not to add any more frustration to the lives of stressed-out parents. Both Rafferty’s Garden and Only Organic scored five stars for the user-friendliness of their packaging, with Aldi and Heinz coming a close second on four stars and Nestle finishing with three.

Something my child enjoys

Our biggest driver of satisfaction was whether the children of our respondents actually enjoyed the food their parents bought for them. According to our satisfaction ratings, it was Rafferty’s Garden and Aldi Mamia that offered the most enjoyable food, with both brands scoring our maximum five stars. Heinz and Only Organic also scored well with four stars, whilst Nestle achieved three for the taste of their baby food.

Canstar Blue commissions Colmar Brunton to survey 1,300 Australian consumers across a range of categories to measure and track customer satisfaction. The outcomes reported are the results from customers within the survey group who have purchased baby food products in the last three months (not including formula) – in this case, 596 Australian parents.