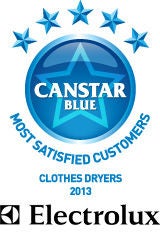 If you’re shopping around for a new clothes dryer for your home, we’ve compared six notable appliance brands in these results. For the second year in a row, Electrolux has triumphed and receive our Most Satisfied Customers Award – Clothes Dryers.

Electrolux, received five stars in seven of the eight rated criteria this year, for value for money, performance and reliability, time taken to dry clothes, quietness while operating, design, warranty and the all-important, overall satisfaction. The brand was among excellent company in the five star stakes:

Simpson, Fisher & Paykel and Whirlpool were also rated in this survey.

If you’re thinking of shopping around for one of these appliances, we’ve written a handy buying guide for clothes dryers just for you.

Deciding which appliances to buy can be difficult without any prior product knowledge, with most people looking for advice before making a purchase. While three quarters of respondents to our recent survey read appliance reviews and ratings online before making their decision, three in five go to the source they trust most and ask friends and family for advice.

Thirty percent of respondents report they are happy to buy the model recommended by their retailer, while other respondents are content to let price be their guide: twenty-two percent of those surveyed admit they always buy the cheapest appliance available.

Long term cost-savings on specific appliances are important as well, according to the 92% of respondents who take notice of energy ratings when buying appliances such as clothes dryers. Nearly four in five reported they limit the use of their clothes dryer due to the price of electricity.

Electrolux was our five star achiever for overall customer satisfaction in this category. Following were LG, Bosch, Simpson and Fisher & Paykel with four star ratings and Whirlpool with three.

Customers of both Electrolux and LG were most satisfied with the performance and reliability of their clothes dryer purchases – earning both brands five stars. Next in line were Bosch, Simpson and Fisher & Paykel with four stars each; Whirlpool followed with three.

A clothes dryer with a quick drying cycle is a valuable tool for time poor Australians, and Electrolux was top of the pile with a five star rating. LG, Bosch, Simpson and Fisher & Paykel all achieved four stars, and Whirlpool received three.

Both Electrolux and Bosch tied for the five star spot for the amount of noise produced while operating. LG, Simpson and Fisher & Paykel each achieved four star ratings, and Whirlpool received three.

Customers of both Electrolux and Bosch* were most satisfied with the warranties provided by their clothes dryer manufacturer. Close behind the five star-achievers was LG with four stars, then Simpson, Whirlpool and Fisher & Paykel with three.

Energy efficiency continues to be an important purchasing consideration for those who want more from their appliances. LG excelled with a five star rating for how efficiently its clothes dryers use energy. Electrolux and Bosch followed with four stars, and Simpson, Fisher & Paykel and Whirlpool followed with three.

How we rated clothes dryers

Canstar Blue commissions Colmar Brunton to regularly survey 2,500 Australian consumers across a range of categories to measure and track customer satisfaction. The outcomes reported are the results from customers within the survey group who have purchased a clothes dryer in the last three years – in this case, 419 people. Effectively, they’re reviewing their experience with the product they purchases – information we then gather.