You are viewing the archived 2013 award for top load washing machines. Go to the current top loader ratings. 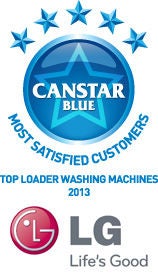 Ultimately, this can save you money; cleaning your washing machine every few months (by doing an empty wash on the hottest setting) can extend its life and improve its performance.

This is important, because many failed to get the most from their machine in other ways. For example, a quarter of respondents didn’t bother waiting until they had a full load before doing their laundry. Additionally, more than a third admitted to ignoring care labels and washing all their clothing on the same setting.

Our recent survey also measured how satisfied customers were with their top loader washing machine. LG was awarded our 2013 award for Most Satisfied Customers in this category, edging out Samsung, Simpson, Fisher & Paykel, and Whirlpool.

Taking a closer look at the top loader results:

LG achieved a top score for overall customer satisfaction in this category. Samsung, Fisher & Paykel and Simpson followed with four stars each, and Whirlpool received three.

It’s not uncommon to do five or more loads of washing per week, and your washing machine needs to be able to keep up with this demand. Customers of LG, Samsung and Simpson were most satisfied with their machine’s reliability. Fisher & Paykel came next with four stars, and Whirlpool finished with three.

How easy is your top loader to operate? You want it to be as simple as possible if you’re a frequent washer, and it was Samsung and LG customers who were most satisfied with the ease of use of their machine. Both Simpson and Fisher & Paykel received four star ratings, and Whirlpool received three.

LG top loader washing machines topped the list for the quietness of their operation, receiving five stars for quietness. Samsung, Simpson and Fisher & Paykel all followed with four, and Whirlpool achieved three.

Customers of both LG and Samsung were most satisfied with the warranty and service from their washing machine’s manufacturer – these brand receiving five star ratings, followed by Simpson and Fisher & Paykel with four, and Whirlpool with three.

Nearly a third of respondents to our washing machine survey felt strongly enough about ‘being green’ to recycle the grey water from their washing machine. For anyone of the same mindset, try an LG or Samsung top loader model – the two brands received five stars for water efficiency in this category. Simpson and Fisher & Paykel both achieved four star ratings; and Whirlpool closed these results with three.

Canstar Blue commissions Colmar Brunton to regularly survey 2,500 Australian consumers across a range of categories to measure and track customer satisfaction. The rating outcomes reported are the results from customers within the survey group who have purchased and used a top loader washing machine in the last three years – in this case, 554 people.

Brands must have received at least 30 responses to be included. Results are comparative and it should be noted that brands that received three stars have still achieved a satisfaction measure of at least six out of 10.