Some only need bare essentials when it comes to kitchenware, while others look for the best food equipment money can buy. Find what you’re looking for with our customer satisfaction ratings of kitchen retailers.

You are viewing the archived 2013 ratings for kitchen retailers. There are no immediate plans for Canstar Blue to update this rating in the future. 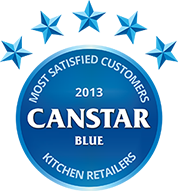 We surveyed the customers of kitchen retailers to measure their satisfaction with these stores, and Robins Kitchen was the best on display. They receive our Most Satisfied Customers Award – Kitchen Retailers for 2013.

“My kitchen rules!” says two in three who cook at home

Everyone appreciates a home-cooked meal, and two thirds of respondents to our recent survey have really begun to embrace it by cooking more food at home than ever before.

Of those who stay in to play ‘Masterchef’, two thirds choose to eat at home for financial reasons, and two in five were inspired by cooking shows to try it themselves. A further four in five make more meals at home because it’s healthier than eating out.

Most respondents – again, more than four in five – keep their health in check by considering the nutritional value of the meals they make. This was particularly true for woman, 91% of whom consider nutrition when making home cooked meals (opposed to 79% of men).

As well as the standard reasons of saving money and eating healthily, roughly a third of at-home ‘chefs’ see cooking at home as a way to relax – especially when tense. That said, a similar number find cooking to be a chore (36%).

With the kitchen nominated as the favourite area of the home for two in five respondents, the likelihood of most Australians needing a range of cooking equipment is high. We surveyed the customers of kitchen retailers to measure their satisfaction with these stores, and Robins Kitchen was the best on display. They receive our Most Satisfied Customers Award – Kitchen Retailers for 2013.

Looking closer at our results:

General Trader and King of Knives were also rated in this survey.

Canstar Blue commissions Colmar Brunton to regularly survey 2,500 Australian consumers across a range of categories to measure and track customer satisfaction. The outcomes reported are the results from customers within the survey group who purchased an item from a specialist online or bricks and mortar kitchen retailer (not a department store or supermarket) in the last three months – in this case, 642 people.

Customers of Robins Kitchen were most satisfied overall with their retailer. Following the five star recipient were House, General Trader, Matchbox and King of Knives with four stars each, then Wheel&Barrow with three.

Whether you’re purchasing a big ticket item (like a Kitchenaid) or just stocking up on crockery, it’s easy to appreciate good value for money regardless of the product’s price tag. Robins Kitchen excelled with a five star rating in this area, followed by four star recipients House, General Trader, Matchbox and King of Knives. Wheel&Barrow received three stars for value for money.

Robins Kitchen received five stars for its service before, during and after sale. Next was four star recipient Matchbox, then House, General Trader, King of Knives and Wheel&Barrow with three.

Three brands received five stars for the layout of their stores: Robins Kitchen, House and Wheel&Barrow. General Trader followed with four stars, and Matchbox and King of Knives both finished with three.

Range of products and brands available

Customers of Robins Kitchen were most satisfied by the range of products and brands available in their store, leading the brand to five star achievement. House, General Trader, Matchbox and King of Knives all followed with four stars each; Wheel&Barrow finished with three.

Having the option to return a product for a refund or replacement if things don’t ‘pan out’ can help seal the deal on where you should shop. Both Matchbox and Robins Kitchen achieved a five star rating for their returns policies, and were followed by four star recipients House, General Trader and King of Knives. Wheel&Barrow finished with a three star rating for product returns.