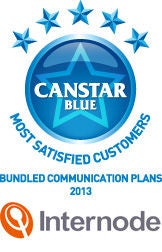 Presently, four in five respondents to our new survey know their bundled communications plan quite well, being privy to how many minutes they’re allowed, what their data allowance is, how much it costs, etc. If you think you can find a better all-round deal for your mobile, home phone and internet bundle, we’ve compared some of these brands in our latest survey.

Award-winning provider Internode achieved our Most Satisfied Customers Award for Bundled Communication Plans – 2013, in a comparison of eight different brands. Internode’s parent company, iiNet, should be commended for its five star rating for customer service, as should TPG for a five star rating for value for money.

We also compared iPrimus, Optus, Telstra, Vodafone and Dodo in this survey.

Landlines may need a lifeline, according to new research

Is the landline phone in imminent danger of being cast aside for mobile phones? Perhaps, as our latest results show that 35% of survey respondents use their landline phone for less than 20% of all phone calls.

When respondents of different ages were asked:

Unsurprisingly, nearly four in five respondents use their mobile phone as an alternative to their work or home phone. VOIP (voice over internet protocol) and Skype collectively are popular options for homes as well, being used by one in five respondents instead of a landline.

Despite there being so many great substitutes, nine in every ten respondents told us they still own a landline. It’s also worth noting that many electronic heavyweights, such as Panasonic, are looking to incorporate smartphone and VOIP functionality into new landline phone models, perhaps to give it more prominent status in the modern household.

One way consumers can utilise their landline is in conjunction with a range of other useful telecommunication services – i.e. by bundling them together. In that light, let’s look at the rest of our results for bundled communication plans.

Canstar Blue commissions Colmar Brunton to regularly survey 2,500 Australian consumers across a range of categories to measure and track customer satisfaction. The outcomes reported are the results from customers within the survey group who have a bundled home telecommunication services and pay the bills (i.e. mobile / home phone / internet package) – in this case, 1,637 people.

A bundled communications package connects everyday Australians with the outside world – all from the comfort of their living room. Internode achieved five stars for overall customer satisfaction in this category, and was followed by four star recipients iiNet, iPrimus, TPG and Optus. Telstra, Vodafone and Dodo came next with three stars each.

When asked why they have a bundled communications plan, a substantial 77% of respondents answered that it’s cheaper than purchasing different services separately. Customers of TPG were most satisfied with the value for money of their bundled communications package, which earned the brand five stars. Internode, iiNet, iPrimus, Optus and Dodo all received four stars in this area, and Telstra and Vodafone each received three.

A major benefit of a bundled communications package is you only need to find one provider who offers fantastic customer service. Both Internode and iiNet received five star ratings for customer service in this category, just edging out four star recipient iPrimus, and three star achievers TPG, Optus, Telstra, Vodafone and Dodo.

Whether you’re streaming your new favourite show or calling up your friend down the road, good network performance means a reliable service when you need it. Internode received five stars in this area, and was followed by iiNet, iPrimus and Telstra with four stars each. Optus, TPG, Vodafone and Dodo each received three stars for network performance.

Customers of Internode were most satisfied with how flexible their contract was. This brand achieved five stars, iiNet received four, and iPrimus, TPG, Optus, Telstra, Dodo and Vodafone each received three.

While it’s a good idea to be familiar with your contract no matter what, it’s helps if your service provider makes it easy to read in the first place. Internode achieved a five star rating for how clear its contracts are. iiNet and iPrimus followed with four stars each, and TPG, Optus, Telstra, Dodo and Vodafone each finished with three.

Just because you’re bundling services together doesn’t mean your bills have to become more complicated to understand! Internode received five stars for its billing clarity and accuracy. Next were iiNet and iPrimus with four stars apiece, and then three star recipients TPG, Optus, Telstra, Dodo and Vodafone.