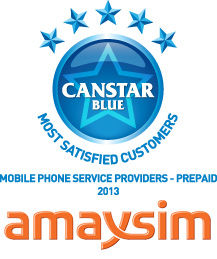 Whether it’s to organise your social outings for the week, or kill some time on the bus watching a movie, smartphones have become firmly engrained in our day-to-day lives. It’s little wonder then that more than a quarter of respondents to our recent survey agreed their mobile phone has become a portable personal assistant they cannot function without.

A similar number of respondents are less attached, and give themselves a break by switching their phone off after-hours each weekend. Also, while few respondents chose to invade the privacy of their partners by secretly looking through their texts, emails or contacts (only 12%), Generation Y respondents were much more likely (27%) to have a sneaky peek.

If you’re in the market for a pay-as-you-go phone account, our ratings have compared the customer satisfaction levels of several well-known providers. Amaysim achieved its first Most Satisfied Customers award in our prepaid mobile phone service providers category – ahead of other rated brands Virgin Mobile, Optus, Telstra and Vodafone.

If you’re more interested in a mobile phone plan, our ratings can be found here.

Canstar Blue commissions Colmar Brunton to regularly survey 2,500 Australian consumers across a range of categories to measure and track customer satisfaction. The outcomes reported are the results from customers within the survey group who have an active prepaid mobile phone account in their name and pay for credit – in this case, 665 people.

For those who want the freedom to top up their mobile phone credit whenever it suits them, take a look at our five star recipient for overall customer satisfaction: Amaysim. Next were four star recipients Virgin Mobile and Optus; then three star achievers Telstra and Vodafone.

How many minutes of call time, or number of texts, do you get per prepaid recharge? Better value for money doesn’t just mean a lower price: it means getting the best value possible from your prepaid account. Amaysim customers were most satisfied with the value for money of their prepaid provider. Amaysim were awarded five stars, Virgin Mobile and Optus received four, and Telstra and Vodafone followed with three.

Which brands excelled for prepaid provider customer service? This year, Amaysim received the five star nod in this area, with Virgin Mobile and Optus following with four. Telstra and Vodafone both finished with three stars each for customer service.

Accessibility of the provider

Customers of Amaysim were most satisfied with the accessibility of their prepaid mobile phone provider– whether by telephone, online chat, or shopfront. Amaysim were awarded a five star rating, and were followed by Virgin Mobile and Optus with four stars each, then by Telstra and Vodafone with three.

A phone with reliable reception can be an invaluable tool for organising your life and keeping you entertained wherever you go. Amaysim received a five star rating in this category for its network coverage. They were followed by four star recipients Virgin Mobile, Optus and Telstra, then by Vodafone with three.