You are viewing the archived 2013 ratings for smartphones. Go to the current smartphone ratings. 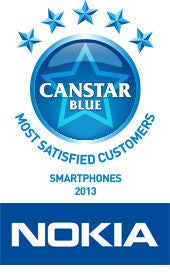 Nokia has continued to innovate in a competitive marketplace this year, so it should come as no surprise that this brand has received our Most Satisfied Customers Award – Smartphones, 2013 ahead of Apple, Samsung, Blackberry, Sony, HTC and LG.

Our survey assessed the customer satisfaction levels of 1,584 smartphone users. Nokia achieved the majority of five star ratings, in areas such as overall satisfaction, value for money, and camera quality.

Nokia’s reputation as a major smartphone player has been defined by its Windows Phone handsets – namely the Lumia line. These phones utilise the Windows 8 operating system’s trademark ‘tile’ design, and showcase cameras with especially competitive specifications. This should delight one in two of our survey respondents, who state their smartphone has replaced their camera entirely.

Other rated brands also managed to distinguish themselves:

Close to a third of smartphone users ask, “Is Big Brother watching me?”

A significant number of respondents (30%) to this survey are concerned their smartphone may eventually come to represent ‘big brother’, with their every movement tracked.

A recent article from news.com.au details how smartphones can collect data, but proposes this information won’t necessarily be used for nefarious purposes.

At least respondents seem to be refraining from spying on each other. Only one in ten Australians would consider installing an app on their partner’s phone to track them. However, roughly half of our respondents with children under the age of 18 would install a tracking app on their child’s phone, to ensure they know their whereabouts.

Privacy issues aside, three in five Australians do not think it’s appropriate for children under the age of sixteen to have a smartphone at all.

Canstar Blue commissions Colmar Brunton to regularly survey 2,500 Australian consumers across a range of categories to measure and track customer satisfaction. The outcomes reported are the results from customers within the survey group who have purchased a smart phone (i.e. a phone that can access the internet) in the last two years – in this case, 1,584 people.

Nokia customers were most satisfied with the value for money of their smartphone purchase. This brand received five stars; Sony, Samsung, HTC, Blackberry and LG all followed with four, and Apple finished with three.

Apple achieved five stars for how quickly its phones operated and responded to the commands of users. Nokia, Samsung, Blackberry, Sony and HTC each received four stars in this area; LG secured three.

Sometimes, it takes a ‘genius’ to know how to fix a smartphone. Nokia and Apple each received five stars for mobile phone tech support. Blackberry and Samsung both followed with four stars apiece, and Sony LG and HTC finished with three each.

Smartphones are versatile devices, but that means little if the phone isn’t easy to use! Apple achieved five stars for smartphone user friendliness. Nokia, Samsung and Sony each followed with four star ratings, as did HTC, Blackberry and LG with three.

With a good quality smartphone camera, it’s easy to capture important moments – and share them with the world at the touch of a button. Both Nokia and Sony received five star ratings for the quality of their smartphone cameras. Apple, Samsung and HTC all achieved four stars in this area, and Blackberry and LG both finished with three.

There’s nothing worse than trying to use your smartphone at a key moment, only to see the dreaded ‘battery empty’ symbol flash across your screen.  Nokia smartphone customers were most satisfied with the battery life of their phone, which earned the brand five stars. LG and Sony were next with four stars, and Blackberry, Samsung, HTC and Apple followed with three.

A large smart phone screen may mean a better user experience all-round. Samsung earned five stars in this area, ahead of four star recipients Sony, Nokia, HTC and Apple. LG and Blackberry both finished with three stars for screen size.