You are viewing the archived 2014 ratings for mobile plans. Go to the current plan ratings. 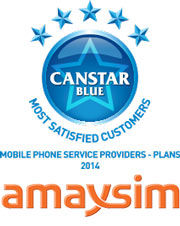 Of the 2,241 Australians we surveyed, close to three in five believe that a mobile phone plan is better value than a prepaid account.

But which phone plan provider is going to offer you the best deal?

Our survey queried customers about how satisfied they were with their mobile plan, with Australia-based brand amaysim securing our Most Satisfied Customers Award for 2014 in this category.

amaysim, which runs off the Optus 3G network, is now a well-known brand that markets itself as a low cost, SIM only provider. This brand achieved five star ratings in all but one of our survey criteria; excelling in areas such as value for money, billing, and customer service.

amaysim was compared alongside TPG, Telstra, Vodafone, Optus, and Virgin Mobile; outperforming its competitors in all categories except network coverage, where special mention must go to Telstra.

amaysim customers were most satisfied overall when it came to their mobile phone plan, earning this brand a five star rating. TPG were closest to our leader, earning four stars for overall customer satisfaction, followed by Virgin Mobile, Optus, Telstra, and Vodafone with three stars each.

Everyone wants a fair price to talk to their loved ones, or surf the web on the bus. So, which consumers were most satisfied with the value for money of their provider? amaysim tallied five stars in this area, just ahead of four star recipient TPG. Virgin Mobile, Optus, Telstra, and Vodafone all followed with three stars each.

Some questions regarding your phone may take you hours to figure out. But taking it into your service provider’s store, calling them, or emailing them may ensure your enquiry is resolved immediately.

Customers with an amaysim mobile phone plan were most satisfied with the service they received from their provider. This brand achieved five stars, Optus, TPG, and Virgin Mobile all received four, and Telstra and Vodafone both finished with three.

If you have a question for your mobile phone carrier, chances are there are plenty of convenient ways for you to get in touch. amaysim achieved five stars for how accessible they were to customers. Close behind were four star recipients Optus, Virgin Mobile, Telstra, and TPG. Vodafone received three stars in this area.

Canstar Blue commissions Colmar Brunton to regularly survey 2,500 Australian consumers across a range of categories to measure and track customer satisfaction. The outcomes reported are the results from customers within the survey group who currently have an active mobile phone plan in their name and pay the bills – in this case, 1,527 people.