You are viewing the archived 2014 ratings for tablets. Go to the current tablets ratings.

New iOS & Android tablets have fast become a staple in Aussie homes. Find out what Australians think of their latest purchase in our tablet customer satisfaction ratings.

Reviewed by the Canstar Blue Research Committee on November 17th, 2014. 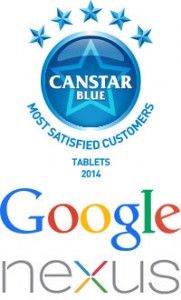 Mobile phones first emerged in the consumer market in 1984, with the introduction of Motorola’s DynaTAC 8000X forever changing the way we communicate with one another.

It took us thirty years to become reliant on mobile phones, but tablets have become just as indispensible in a much smaller timeframe. Australians who responded to our recent survey spend an average of 2.3 hours a day on their tablet computer. Furthermore, more than a quarter of these Aussies take their tablet wherever they go, and even more (34%) state, “I couldn’t live without my tablet.”

So, which tablet can keep up with the needs of so many Australians? That’s the tricky question, because there are so many models to choose from. According to these results, Google (including Nexus) has the most satisfied customers, and has received our award for 2014 ahead of Apple, Samsung, Microsoft, Toshiba, and ASUS.

Google tablets achieved five stars for overall satisfaction, value for money, speed of processor / web browser, user friendliness, battery life, and its compatibility with other products and services. Other rated brands also made some winning strokes.

We’ve done a roundup of some of the latest products these manufacturers have produced, to give you an idea of what is on offer. All the below technical specifications and pricing are current at time of print.

Google utilise original equipment manufacturers (e.g. ASUS, LG, HTC) to source the parts for its Nexus range. Google design and develop these products, and ship them with the latest iteration of the Android operating system.

The Galaxy Tab is largely considered Samsung’s flagship tablet line, complete with a large AMOLED screen and a suite of apps exclusive to the brand (including fitness managers and a software suite for professionals).

Typical Battery Life: Up to 9 hours under internet usage (WiFi)

Apple wittingly spurred the tablet computing scene when it launched the first iPad in 2010. Since then, it’s continued to refine and develop its products, culminating in its latest: iPad Air 2.

Typical Battery Life: Up to 10 hours under internet usage (WiFi)

The line between tablet and laptop is becoming increasingly blurred, and Microsoft are walking that line with a spring in its step. Microsoft produces many different types of tablets, notably with various Intel processors  so customers can choose how powerful they want their Windows tablet to be.

Processor: Intel Core Processor (choose between i3, i5, i7 – prices vary)

Typical Battery Life: Up to 9 hours when browsing the web

Canstar Blue Overall Satisfaction Rating: 3 stars
Toshiba has a nice suite of tablet computers, many of which double as laptops thanks to keyboard attachments. Toshiba has 16 different tablet products available on its website – all with different prices and feature-sets. Given the range, there’s (most likely) something for everyone!

Whether you need something powerful like the Transformer or something super portable like the MeMO, ASUS runs the gauntlet of tablet design.

Canstar Blue commissions Colmar Brunton to regularly survey 3,000 Australian consumers across a range of categories to measure and track customer satisfaction. The outcomes reported are the results from customers within the survey group who have purchased and used a tablet computer in the last two years – in this case, 1,214 Australians.

Each brand must have received at least 30 responses in order to be included. Results are comparative and it should be noted that brands receiving three stars have still achieved a satisfaction measure of at least six out of 10. Not all brands available in the market have been compared in this survey.