You are viewing the archived 2014 ratings for car tyres. Go to the current car tyre ratings. 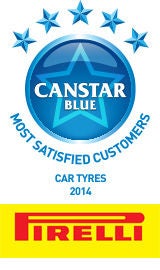 If you’re in need of a new set of wheels, it might be time to compare car tyre brands with our customer satisfaction ratings. In our latest comparison, Pirelli achieved our Most Satisfied Customers Award – Car Tyres, 2014 ahead of Bob Jane, Michelin, Yokohama, Dunlop, Kumho, Goodyear, Firestone, Bridgestone and Maxxis

Pirelli is a well established name in the Formula One world, but is also a brand dedicated to the production of high performance road tyres for regular drivers. In this survey, the brand received five stars for overall satisfaction, quality of tyres, handling and noise.

Bob Jane and Kumho achieved five star ratings for the value for money of their tyres, and Bob Jane secured another top rating for new tyre warranty.

Tyre technology has been refined and developed for more than one hundred years, but new innovations could see the humble wheel make the biggest leap forward yet.

Bridgestone unveiled an airless concept tyre at this year’s Tokyo Motor Show that cannot be punctured and never requires inflation. A similar model was unveiled by Hankook at a motor show in Germany, constructed from ‘recyclable polyurethane synthetic materials.’

These tyres are still very much in the concept phase, as current prototypes are presently only capable of supporting ultra-light vehicles.

However, tyres similar to these are already being used … albeit not on cars. An American manufacturer is utilising airless tyres for one of its latest all-terrain vehicles (ATV). These vehicles are designed for extreme conditions, such as disaster relief and military usage.

Such innovations will come as a relief to 24% of our recent survey respondents who apparently don’t know how to change a flat tyre. A similar percentage of drivers can’t tell when their tyres need replacing.

While some drivers may not know a great deal about wheels and rubber, the majority of respondents (87%) agree that safety is more important than price when it comes to purchasing tyres.

Canstar Blue commissions Colmar Brunton to regularly survey 2,500 Australian consumers across a range of categories to measure and track customer satisfaction. The outcomes reported are the results from customers within the survey group who have bought new car tyres (not retreads) in the last three years – in this case, 1,195 people.

Tyres are usually an investment you live with for several years, so it’s important you buy a quality tyre product. Pirelli stayed ahead of the competition with a five star rating for the quality of its tyres. Next with four stars were Yokohama, Michelin, Bob Jane, Goodyear, Bridgestone, Dunlop and Kumho; then three star recipients Maxxis and Firestone.

Pirelli customers were most satisfied with the handling of their car tyres on Australian roads. Yokohama, Bob Jane, Michelin, Dunlop, Goodyear, Bridgestone, Kumho and Maxxis received four stars each in this area, and Firestone achieved three.

Eliminating road noise can make your trips on the road a lot more enjoyable. Pirelli achieved five stars for the level of noise its tyres produced, and were followed by four star recipients Bob Jane, Michelin, Yokohama, Dunlop, Goodyear, Kumho and Bridgestone.