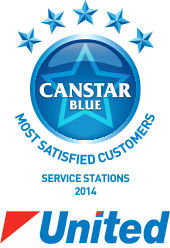 For three in five drivers, it is cheaper to drive than it is to use public transport, according to our survey results. A quarter of surveyed motorists are even prepared to drive across town if it meant getting a better price on fuel.

We are a nation that very much relies on the modern automobile – indeed, there are 568 passenger cars per 1,000 people in Australia, according to the ABS in 2013 – and many of us seek out the best price and service when getting petrol.

Where should drivers fill up every week though? Why not at United Petroleum, this year’s recipient of our Most Satisfied Customers Award – Service Stations?

In our survey of more than 2,000 Australian drivers – all of whom visited a petrol station in the last three months – we found that United customers were most satisfied with the price they paid for petrol, and most satisfied with their station overall. This is the fourth year in a row United have secured our award in this category.

A host of other prominent brands were rated in these results.

Motorists who filled up at United Petroleum were most satisfied overall with their petrol station. Next in line – following our five star recipient – were BP, 7-Eleven, Caltex, and Coles Express with four stars each; followed by three star recipients Shell and Caltex Woolworths.

The average Australian motorist pays $144 a month in petrol costs, but could you be getting a better deal at the pump? United Petroleum achieved five stars for the price of its petrol, whether that be an ethanol blend or for premium octane. 7-Eleven customers were next in terms of customer satisfaction – earning three stars – and followed by two star recipients Coles Express, BP, Caltex Woolworths, Caltex, and Shell.

Whether you’re filling up late at night or early morning, it’s nice to be greeted at the counter with a smile. Australian customers of four different brands were most satisfied with the customer service at their service station. BP, 7-Eleven, Coles Express, and Caltex all finished with five stars; United Petroleum and Shell both received four, and Caltex Woolworths earned three.

Running low on ice for a party? Need some firewood for those cold winter nights? Service stations are pretty diverse in terms of what they offer for purchase.

Caltex, 7-Eleven, and Coles Express all finished with five stars for the range of items their service stations had for sale. Next with four stars each was Shell, BP, Caltex Woolworths, and 7-Eleven. United Petroleum received three stars for its product range.

Appearance and cleanliness of petrol station

Caltex and Coles Express customers were most satisfied with how their petrol station looked. These five star-winning brands were followed by Shell, BP, Caltex Woolworths, and 7-Eleven; and then by United Petroleum with three.

Keeping your car looking spotless can be tricky, but made easier when your petrol station is outfitted with facilities for your car’s upkeep. Motorists have plenty of options to choose between with BP, Caltex, Coles Express, and 7-Eleven all receiving five stars in this area. Shell finished with four, and both Caltex Woolworths and United Petroleum closed with three.

Canstar Blue commissions Colmar Brunton to regularly survey 2,500 Australian consumers across a range of categories to measure and track customer satisfaction. The outcomes reported are the results from customers within the survey group who have refuelled a motor vehicle at a service station in the last 1 month – in this case, 2,067 customers.