You are viewing the 2015 customer satisfaction ratings for Microwaves. To view the current ratings, please click here.

We’ve released our inaugural comparison of microwave ovens, so you can see how other shoppers rate their trusty kitchen appliance.

Two in three can’t get by without their microwaves

The modern kitchen can feature anything from bench top mixers to water ovens used for sous vide cooking. However, two in three respondents to one of our previous surveys1 confirm there’s one appliance in their kitchen they don’t think they can live without: the humble microwave oven.

Close to three quarters confirm they use their microwave every day, and one in two cook meals with this tried and tested appliance more than once a week.

Perhaps most interesting of all is that more than a third of Australians find ways to use their microwave for tasks other than reheating, defrosting or cooking food. Of these respondents:

1Results from our 2013 commissioned survey of microwave owners. 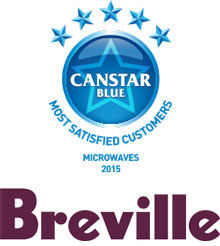 From a closely contested field, Breville has emerged victorious as the microwave brand with the most satisfied customer in 2015, earning our award in the process.

The amount of quality products in the market this year was evident in our results, with four other brands achieving four-star ratings for overall satisfaction: Sharp, Panasonic, LG and Whirlpool. Samsung and Kambrook rounded out the field with three stars each.

Breville’s victory was a product of their consistent excellence in the six criteria we surveyed, topping our ratings for value for money, ease of use, ease of cleaning, and appearance and design.

LG and Sharp microwave ovens also achieved five-star ratings for ease of use, and along with Panasonic microwaves they both scored five stars in functionality and even heat distribution.

Eighty-six percent of the Australians we surveyed stated that their microwave oven was an essential appliance in their homes, so the consistent quality of our rated brands is surely a cause for satisfaction. Read on for a breakdown of how each brands fared in our results.

Breville alone achieved a five star rating for value for money, closely followed by four-star winners Sharp, Panasonic and LG; next in line were Whirlpool, Samsung and Kambrook on three stars. With more than half of our respondents stating that price was a deciding factor when buying a microwave, Breville’s win in this category is especially telling.

A stronger factor for all brands was ease of use, with Breville, Sharp and LG all achieving five stars for customer satisfaction: if you’re looking for a simple, microwave oven, look no further. Samsung and Panasonic were slightly behind on four stars, whilst Kambrook and Whirlpool achieved three.

The design of Breville’s microwaves was another of its strong suits, being the only manufacturer to hit the five star rating. Panasonic, LG and Sharp took four star ratings, with Samsung, Whirlpool and Kambrook following with three. So if you’re looking for a sleek, stylish microwave oven, start your search here!

Another strong suit for all brands was how evenly cooked their food was: five-star ratings for Sharp, Panasonic and LG showed that manufacturers are making sure that the main function of their microwaves is top priority. Breville and Samsung also did well with four stars each, and Whirlpool and Kambrook achieved three stars.

Sharp, Panasonic and LG once again showed their commitment to making useful microwaves, achieving five-star satisfaction for the functionality of their microwave ovens. Breville, Samsung and Whirlpool all achieved four, with Kambrook next on three – the highest overall scores of any category. Having plenty of functions is clearly something that Aussies value highly in their microwaves.

Breville was once again the sole five star recipient, followed closely by Sharp, Panasonic, LG and Whirlpool with four-star ratings, then by Samsung and Kambrook with three.

The invention of microwaves

How we rated microwaves

The invention of microwaves

The microwave is a staple for those craving for warm, home cooked meals in just a few minutes. With the use of electromagnetic waves, this appliance can turn frozen products into mouth-watering delectables. It can do everything from de-frosting and cooking to baking and roasting. A great all-rounder that can replace many traditional products, the humble microwave is now a necessity in the kitchen. Here is some information on how microwaves work. And make sure you check our microwave oven buying guide.

The microwave oven was not meant to be invented – in fact, it was an accident. In 1946, Dr. Percy LeBaron Spencer was working on a different device called the Magnetron. In the middle of his work, Dr. Spencer noticed his chocolate bars melted and realised these were caused by the emitted electromagnetic particles of his invention. He found the molecules were hastening the food’s cooking process.

As a result of developing the Magnetron, the scientist’s employer, Raytheon Corporation, introduced the microwave oven to the public. It was formerly named the 1161 Radarange and was first distributed to American consumers. Later on, Australia deemed it to be worthy of investing in and imported roughly 150,000 units to be sold throughout the continent’s households.

If you want to learn more about the history and development of the modern microwave, we have a blog on technology of microwave ovens, and it’s a great read if you’re thinking of purchasing the appliance. There are also some surprising things you can do with microwaves. And some things you definitely shouldn’t microwave.

Every year, the team at Canstar Blue conduct a customer satisfaction survey on microwave ovens. There have been changes in how we use microwaves over the years. Seen as the appliance Aussies can’t live without, our respondents revealed these brands to be the best for them:

Ready to go through your purchasing options? Before checking out the latest deals and products, consider the major uses you may have for a microwave. It may be frequently used to prepare microwavable meals, thaw frozen meat or fish, steam vegetables or re-heat food. Or make some of these delicious microwave recipes. Choosing the right one for you depends on a number of considerations, including the style of the microwave. Here’s some information from our surveys on what we look for in a microwave.

The two following microwave styles are the most common available:

This comes in a compact format and may be placed on any surface. It will have the basic functions of a standard microwave oven such as heating and thawing. They generally cook and de-frost similar ranges of food from popcorn, frozen vegetables up to left overs.

Thankfully, many modern day countertop microwaves have automatic sensor and one-touch control technologies. These features offer convenience in a homemaker’s choice of cooking modes, as the appliance also automatically senses if your food is already warm enough or ready for consumption. This sensor keeps your food from getting burnt or overcooked.

Prepare about $150 to $300 to get a unit which answers to your daily heating needs.

This type of microwave may be synced in with traditional stoves and convection ovens. Usually installed over kitchen ranges, they are typically used by chefs and those who are a bit more serious about cooking.

If you’re up for heavy duty cooking, over-the-range ovens can support your recipe adventures. They’re the most suitable appliances for steaming, grilling and baking. Since they’ll need to do more food preparation, over-the-range microwaves have additional features such as grease and charcoal filters, and fans with attached vent systems.

As compared to the previous oven type, over-the-range microwaves may be more expensive starting at $200 up to $1,000 or more. Your choice will depend on whether you plan to express your passion in cooking at home or if you’d like to commercially offer your recipes.

This humble appliance can do wonders to your cooking. Whether you’re simply heating leftovers or would like to take your recipes to the next level, we hope we’ve given you a thorough guide in choosing a unit to fit you.

Canstar Blue commissions Colmar Brunton to regularly survey 3,000 Australian consumers across a range of categories to measure and track customer satisfaction. The outcomes reported are the results from customers within the survey group who have purchased a new microwave in the last 3 years – in this case, 1,010 Australians.