Show Important Notes^* Hide Important Notes^*
* Overall satisfaction is an individual rating and not a combined total of all ratings. Brands with equal overall satisfaction ratings are listed in alphabetical order.
^ By clicking on a brand or ‘details’ button, you will leave Canstar Blue and be taken to our referral partner to compare. You agree that Canstar Blue’s terms and conditions apply to this referral. If you click on a brand that our referral partner does not cover, you will be taken to a brand page on Canstar Blue.
Canstar Blue research finalised in September 2015, published in October 2015. 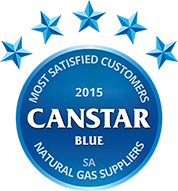 Simply Energy has joined the big three energy retailers in this year’s ratings for South Australia – which suggests the company is starting to increase its market share in the state. It’s one of many formed in the aftermath of deregulation in Victoria and South Australia, increasing competition in the market and giving consumers greater choice over which supplier they use.

Simply does it with South Australia gas customer satisfaction award

South Australia is a state rich in natural resources – including gas – but just because it’s close to home doesn’t mean it’s cheap to buy for the average family in Adelaide. Gas may be natural, but you can forget about any sense of entitlement – you will have to pay for it. In fact, power bills tend to be greeted with an inflated sense of angst compared with others that will drop into your letterbox or email account on a regular basis, so it’s worth making sure you have the best supplier to suit your needs.

It may be a smaller state than some of its neighbours – it terms of population – but South Australia is also a large market for energy retailers, meaning its residents have plenty of choice when it comes to selecting which one they’d like to receive their gas and electricity bills from. This year we’ve found that one of the state’s challenger retailers, Simply Energy, is punching above its weight. Simply Energy has received the Canstar Blue award for Overall Customer Satisfaction after it was rated 5 stars for Gas Suppliers in South Australia in 2015.

So if you’re looking to play the field, we hope our star ratings are a helpful guide at the start of your journey. We all have to pay our power bills, but we should be able to expect a retailer that gives us a fair go over price and makes the process as easy as possible.

In this report, we aim to make understanding your options as easy as possible in a language you can understand.

About the South Australian energy market

As you can see above, Simply Energy has joined the big three energy retailers in this year’s ratings for South Australia – which suggests the company is starting to increase its market share in the state. It’s one of many formed in the aftermath of deregulation in Victoria and South Australia, increasing competition in the market and giving consumers greater choice over which supplier they use. Now there are 15 licensed energy retailers competing for your electricity business in the state, but just a handful when it comes to gas.

The retailers operating in the state have a mix of ownership and structures – some are publically owned and some are privately owned by Australian or overseas investors. Simply Energy, for example, is owned by a French multinational utility company called Engie. While the ownership of these retailers varies greatly, what they call have in common is that they are licensed to operate in the state by the Essential Services Commission of South Australia.

Gas in South Australia comes from four different sources – two of which are in the state itself – Moomba in the north east and Katnook in the south. The other two sources are in south west Queensland and the Victorian Otway Basin. Six transmission pipelines directly and indirectly deliver natural gas to the Adelaide metropolitan area and major regional areas – the network consists of over 7,500 kilometers of pipes. The transfer from the transmission pipelines to the distribution networks takes place at city gate states where the gas is metered and the pressure reduced. Before reaching households or businesses, the gas passed through a customer meter so consumption can be recorded for billing purposes.

Who sets gas and electricity prices in South Australia?

South Australian households and small businesses have been able to choose their electricity supplier since 2003 and their gas supplier since 2004 following the introduction of Full Retail Competition (FRC). In both cases, the market started with a single supplier (AGL for electricity and Origin Energy for gas) whose standing contract price was set by the Essential Services Commission of South Australia. These regulated prices included some “headroom” in order for competing suppliers to attract market share and build a competitive market. The full deregulation of the South Australian energy market was announced in late 2012, meaning retailers can now charge whatever prices they want. The role of the Essential Services Commission therefore changed from an independent price setter for standing contracts to a price monitor to guard against any anticompetitive behavior. From February 2013, AGL and Origin agreed to cut their standing contract prices for two years. South Australia’s decision to remove price regulation for electricity made it only the second jurisdiction nationally to do so after Victoria in 2009.

All retailers are obliged to offer a ‘standard contract’ with regulated terms and conditions, but not prices. They also offer ‘market contracts’ that include some minimum requirements but are otherwise customised by the individual retailer. These contracts are generally referred to as fixed term or fixed benefit period deals, but often include terms and conditions that allow the retailer to vary the price for the duration of the contract. There is also a requirement for each retailer to offer a market contract – for both electricity and gas – with no exit fees.

South Australians now have a number of different retailers to choose from if they decide they want to switch – particularly in the case of electricity. But is there a large-scale appetite to do so? Our survey of more than 300 households in the state found that the majority (81%) are “generally happy” with their gas supplier – that’s roughly in line with the national average. But even though most households are content with their retailer, one in four (25%) said they would like to switch but can’t find the time and 30% would like to but find the process too daunting. The South Australian bill-payers who took part in the survey reported an average gas bill of $246 over the last quarter – significantly less than in Victoria, but similar to the figure from New South Wales. The average bills reported across the state were as follows: 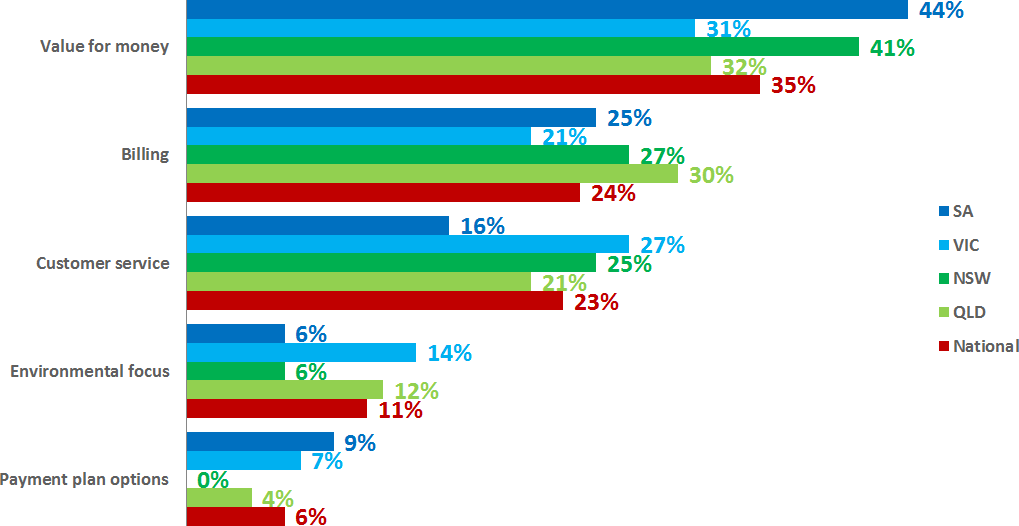 Switching energy suppliers can seem like a daunting thing to do, but the good news is the retailer that is going to benefit from your new business will try to make the process as hassle free as possible. It could begin with simply registering your interest in switching on a provider’s website and waiting for them to call you with details. There are also various websites dedicated to helping you compare tariffs and prices.

Switching retailers will not affect the reliability or quality of your energy services as distributors own and manage the infrastructure – including powerlines and pipes – that delivers gas and electricity to your home and are responsible for the supply. The retailers buy gas and electricity in bulk from the distributors and then sell it onto you. The best way to think about it is – you pay the retailer for your energy, they pay everyone else – including themselves, of course. Each state has its own different distributors and in South Australia the main electricity distributor is SA Power Networks, although some remote electricity distribution systems are provided by other companies. When it comes to gas, the main distributor in the state is Envestra.

Most energy retailers now offer a range of green power plans designed to increase a household’s use of renewable energy. By signing up to such plans, this basically means the retailer commits to sourcing a percentage of that household’s supply from renewable sources. But consumers should be aware that this could mean they pay a higher price for their energy.

Many Australians have also been taking energy efficiency into their own hands – over a million households now have rooftop solar power systems and it’s a major area of focus for retailers. Simply Energy, for example, says customers can reduce their electricity bills while producing no greenhouse gas emissions. It also points out that you could increase the value of your home.

Simply Energy is one of the fastest growing energy retailers in Australia, providing electricity and gas to households in Victoria, South Australia, New South Wales and Queensland. It is the retail arm of GDF SUEZ Australian Energy, part of GDF Suez – now known as Engie – a French multinational utility company. Simply Energy was founded by International Power Australia in 2005 after it completed a buyout of EnergyAustralia interests in Victoria and South Australia. It became part of Engie in 2012.

Formerly known as TRUenergy, Energy Australia is one of the country’s three biggest electricity and gas retailers. It is owned by the Hong Kong-based CLP Group and has a portfolio of energy generating sites, using thermal coal, natural gas, hydroelectric, solar and wind power. It was founded in 1995 from a combination of power generation and retail assets purchased from Singapore Power. In 2011 the company acquired the retail business and trade name of the New South Wales Government-owned EnergyAustralia and later adopted the name. Its headquarters are in Melbourne.

AGL is one of Australia’s oldest companies with a history stretching way back to 1837. Originally founded as the Australian Gas Light Company, it remains based in Sydney where it was charged with the job of lighting the city streets. The company was eventually re-branded as AGL Energy in 2006 and now boasts almost four million residential and commercial customers across New South Wales, Victoria, Queensland and South Australia. It is also said to be the country’s largest private owner, operator and developer of renewable energy assets.

Origin Energy is one of Australia’s largest energy retailers, supplying electricity and gas to properties in New South Wales, Victoria, Queensland and South Australia. Based in Sydney, it was founded in 2000 as a result of a demerger from the Australian conglomerate Boral Limited, in which the energy business was removed from the construction materials business to form a new company. In 2010 Origin Energy purchased the retail divisions of both Country Energy and Integral Energy, and is well-known for its low-carbon products such as GreenPower, Green Gas and solar PV.

Canstar Blue commissioned Colmar Brunton to survey 6,000 Australian consumers across a range of categories to measure and track customer satisfaction. The outcomes reported are the results from customers within the survey group who have an active gas account and regularly pay the bills – in this case, 352 South Australians.