Show Important Notes^* Hide Important Notes^*
* Overall satisfaction is an individual rating and not a combined total of all ratings. Brands with equal overall satisfaction ratings are listed in alphabetical order.
# Price compared to other online retailers.
^ Price compared to bricks and mortar retailers.
Canstar Blue research finalised in February 2015, published in March 2015. 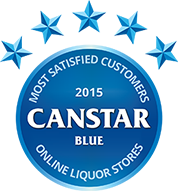 We’ve commissioned customer satisfaction surveys of Aussies who buy alcohol online for several years now, in order to determine which suppliers are our favourite ones to deal with. We’re happy to announce the winner of our 2015 award for overall customer satisfaction: Dan Murphy’s.

Whether it’s having a beer with a few mates at a BBQ, or sipping on a glass of wine after a hard day’s work, it’s no secret that we Aussies enjoy our alcohol, especially in a social context. Nearly two thirds of Aussies who responded to our latest survey reported they rarely go to a social event without having a drink (64%), and more than half only drink socially (57%).

In order to fuel one of the nation’s most popular pastimes, bottle shops have become plentiful around our vast country; but you online liquor outlets make for a great alternative. Why go to the hassle of driving out to a bottle shop and lugging several cases of beer into your car if you don’t have to?

We’ve commissioned customer satisfaction surveys of Aussies who buy alcohol online for several years now, in order to determine which suppliers are our favourite ones to deal with. We’re happy to announce the winner of our 2015 award for overall customer satisfaction: Dan Murphy’s.

The established chain of bottle shops launched its online component several years ago, and this year the company has achieved the maximum five star rating for overall satisfaction needed to qualify for our award. It also topped the charts in areas like value for money, speed of delivery, and its range of products.

Liquorland and GraysOnline were next in the overall satisfaction stakes with four star ratings, whilst Cellarmasters and First Choice achieved three star ratings. A notable mention also goes to GraysOnline for achieving five stars for pricing, the ease of using their site, and value for money.

Value for money is one of the biggest reasons why people turn to online liquor stores: 44% of surveyed individuals said that the cheap deals were their main reason for purchasing alcohol online. As mentioned previously, Dan Murphy’s and GraysOnline tied as the top brands for value for money, both securing five star ratings – if you’re after ‘bargain booze’, these two are a great place to start.

Price (relative to other online retailers)

Dan Murphy’s swept five star ratings for its prices, relative to other online retailers. The award winning brand was followed by GraysOnline with four stars, and Liquorland, Cellarmasters and First Choice with three.

Purchasing from an online retailer can mean a cheaper price for the shopper, which is great news for Australians everywhere.

It was GraysOnline that emerged as the vendor with the most satisfied customers, achieving a five star rating for its prices relative to brick and mortar stores. GraysOnline was followed closely by award-winner Dan Murphy’s on four stars, along with Liquorland, Cellarmasters and First Choice on three.

Dan Murphy’s was the top brand when it came to alcohol quality customer satisfaction, suggesting its selection caters to those looking for something a little fancier. Liquorland achieved four stars for the quality of its range, and GraysOnline, First Choice and Cellarmasters all scored three stars for theirs.

Something important for anyone buying their favourite beer is, of course, whether it’s actually in stock!  If you’re looking for an obscure, imported liquor that you can’t seem to find anywhere, you may do well to consider Dan Murphy’s; the store topped the satisfaction ratings for its range of products. Liquorland and Cellarmasters also achieved exemplary ratings with four stars each, while GraysOnline and First Choice each scored three stars.

A simple, user friendly website is always a big plus for any online store. Fortunately, all the stores we rated scored fairly well in this regard; GraysOnline  customers were most satisfied with the ease of which they could navigate the site, which earned the brand five stars. According to our research, Dan Murphy’s, Liquorland and Cellarmasters were next in line with four stars each. Rounding out the field was First Choice with three stars for its website’s user experience.

You’re holding a party in a couple of days, and you want to get some alcohol as quickly as possible; who should you go to? According to our satisfaction research, Dan Murphy’s is a safe bet for your consignment of liquor, scoring five stars for delivery speed. Liquorland, GraysOnline and Cellarmasters all achieved four stars, with First Choice on three – all worthy choices for rapid delivery.

Canstar Blue commissions Colmar Brunton to regularly survey 3,000 Australian consumers across a range of categories to measure and track customer satisfaction. The outcomes reported are the results from customers within the survey group who have purchased alcohol via an online store within the past six months – in this case, 623 Australians.