You are viewing the archived 2015 ratings for prepaid mobile plans. Go to the current prepaid ratings.

Are you after one of the best prepaid mobile phone providers? Compare pay-as-you-go mobile phone brands using our customer satisfaction ratings to help your search.

Show Important Notes^* Hide Important Notes^*
* Overall satisfaction is an individual rating and not a combined total of all ratings. Brands with equal overall satisfaction ratings are listed in alphabetical order.
^ By clicking on a brand or ‘details’ button, you will leave Canstar Blue and be taken to our referral partner to compare. You agree that Canstar Blue’s terms and conditions apply to this referral. If you click on a brand that our referral partner does not cover, you will be taken to a brand page on Canstar Blue.
Canstar Blue research finalised in November 2013, published in February 2014. 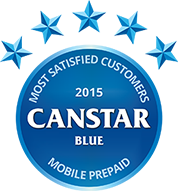 Having rated seven different companies on value for money, service, billing and more, we found ALDImobile to be the highest-scoring brand overall.

Pre-paid mobile phone plans are an easy way to get chatting with your friends as quickly as possible. Only paying for what you use means that there’s no complicated contract to sign up for and no exorbitant fees at the end of every month – you simply pay whatever amount you like, and away you go with calls, texts and mobile data.

This is the big draw of a pre-paid plan – an overwhelming 93% of the Aussies we surveyed switched to pre-paid so that they could pay only for what they need, and over three-quarters switched because they didn’t like being locked into a contract. Of course, not all pre-paid offerings are created equal, which is why we’ve rated Australia’s telco companies based on customer satisfaction – so that you can see for yourself how each brand compares.

Having rated seven different companies on value for money, service, billing and more, we found ALDImobile to be the highest-scoring brand overall. Scoring five stars out of five for overall satisfaction, ALDI was victorious over two-time previous winner Amaysim – the latter finishing with a still-impressive four stars. Also in the running were Optus, Total, Virgin, Telstra and Vodafone with three stars each overall – for a full comparison, check out our breakdown below.

Saving money is one of the key reasons why many people switch to a pre-paid plan: the average monthly phone bill across Australia was just $29.95, less than half the post-paid average of $62. Despite this greatly reduced cost, the value of pre-paid inclusions usually isn’t as generous as a post-paid plan, as evidenced by their less-than-stellar value for money ratings; ALDImobile did very well to secure five stars whilst Amaysim scored four, but the remaining five brands scored three stars each. Nevertheless, a prepaid plan is definitely the way to go if you’re not a big mobile phone user.

Customer service encompasses how well a company informs you about their service, sells it to you, and then provides support during your time using it. Good customer care is even more vital in the mobile plan industry, where the complexity of modern plans and billing can often lead to confusion. Pre-paid plans tend to be simpler than post-paid due to their transparent fees and lack of contracts, and this was reflected by strong satisfaction scores when it came to service: ALDImobile and Amaysim tied for first place with both brands achieving an impressive five-star rating, making them the go-to companies for helpful, personal service. Optus, Total, Virgin and Vodafone all scored four stars, whilst Telstra scored three.

How easy was it to get in contact with your current provider? Telco companies have a number of ways in which they can reach out to customers for both sales and support purposes, including having physical stores, an accessible website, and being contactable by phone or even mail. A successful company needs to reach out to as many potential customers as possible, and this was best done by ALDImobile. The supermarket’s mobile arm scored five stars for accessibility, no doubt helped by their presence in every ALDI supermarket. Four-star achievers Optus, Total and Amaysim also had strong showings, with the remaining brands sitting on three stars for accessibility satisfaction.

Bills that are delivered promptly and accessibly, with the charges clearly displayed, are a big plus when using a pre-paid service. Unlike a post-paid contract, it’s possible to lose track of how much you’ve spent over the past month, so a clear monthly summary can be a useful tool for tracking your spending. The best billing was again done by ALDImobile with five stars; Amaysim scored four stars for their practices, and our other surveyed brands achieved three stars each.

Whilst the cost structures of prepaid plans differ widely from post-paid ones, the network coverage always remains the same. It was the Telstra network – Australia’s most comprehensive – which dominated the satisfaction ratings: ALDImobile, which operates on the network, scored five stars here to complete an impressive clean sweep, whilst Telstra proper scored four stars. The other brands, including network owners Optus and Vodafone, all scored three stars for coverage satisfaction.

Whether you want your phone on a plan or prepaid is based largely on how you use your mobile device. The following are the benefits and drawbacks of each to help you find the right option for you.

There are lots of benefits to prepaid plans. They are a popular choice for parents giving their child a phone for the first time and those who do not use their phone a lot. Providing a specified allowance each month that you pay in advance, prepaid plans allow flexibility and confine the user to a certain amount of credit, great for those with smaller budgets or if you want to control phone usage.

The downside to a prepaid phone is how much it may limit your phone use. Once you run out of credit, you will need to top up or wait for the next month. This can be a good way to limit phone use, but bad for those who use their phones a lot, particularly for work purposes.

Plans are most commonly chosen by those who use their phone a lot or do a lot of work through their mobile device. They allow for unlimited use and easy upgrades, making plans a convenient solution. They also typically have better value for money. However, on the flipside, plans can be easy to exceed, increasing your bills, and also lock you into a contract for a year or more, making it difficult to switch plans or providers.

To read more about the differences and which option is best for you, read our articles on what to think about and which is better.

When choosing a company to get your prepaid service from, value for money, customer service and network coverage are also very important. Other things such as accessibility of the services and how you are billed should also be considered.

The top rated brand for 2015, ALDImobile is the only plan provider to receive top marks in all categories (value for money, customer service, accessibility, billing, network coverage and overall satisfaction. ALDImobile offers three types of plan; a pay as you go, value packs, and data packs.

Amaysim received 4 stars across the board except for customer service, where it got 5. Amaysim has made a name for itself based on the low prices of its plans; amaysim even describes itself as “Australia’s first low cost mobile service provider”.

Optus received 4 stars for customer service and accessibility, and 3 stars for the other categories. Optus offers three types of pre-paid plan; daily, daily plus, and monthly. Daily starts at $1 a day, with limited talk, unlimited text, and 40MB a day. Daily plus starts at $2 a day, for unlimited text and talk and 500MB a day.

Despite being one of the top choices for plans, prepaid options pale for Telstra, with only network coverage getting 4 stars and 3 stars in all other categories.

Virgin received 3 stars for everything except customer service. It has made a name for itself in the prepaid phone plan market using innovative strategies such as being the first Australian telco to offer a data rollover feature.

Another low scoring provider, Vodafone received the same ratings as Virgin, with 3 stars in each category except for customer service, where it received 4 stars.

Canstar Blue commissions Colmar Brunton to survey 3,000 Australian consumers across a range of categories to measure and track customer satisfaction. The outcomes reported are the results from customers within the survey group who have an active pre-paid mobile phone account in their name for which they pay the bills – in this case, 824 Australians.