You are viewing the archived 2015 ratings for mobile plans. Go to the current plan ratings.

Getting one of the best mobile phone plans for your needs could be as simple as using our customer satisfaction ratings to compare Australian phone plan providers.

Show Important Notes^* Hide Important Notes^*
* Overall satisfaction is an individual rating and not a combined total of all ratings. Brands with equal overall satisfaction ratings are listed in alphabetical order.
^ By clicking on a brand or ‘details’ button, you will leave Canstar Blue and be taken to our referral partner to compare. You agree that Canstar Blue’s terms and conditions apply to this referral. If you click on a brand that our referral partner does not cover, you will be taken to a brand page on Canstar Blue.
Canstar Blue research finalised in November 2013, published in February 2014. 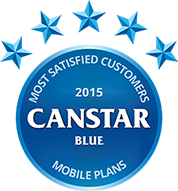 iiNet prove most popular in our phone plan awards

Post-paid mobile plans (also known as contracts) are one of the most popular and heavily advertised methods of keeping in contact with the world. With a post-paid plan, you pay a monthly fee in return for a certain allowance of calls, texts and data, with providers often including a handset which you pay off as part of the plan.

To help you find out which phone plans are the best, we’ve rated popular phone carrier brands with our customer satisfaction ratings. We asked Aussies who had are currently on a plan how satisfied they are with their choice in terms of value for money, network coverage, customer service and more; and we found that one brand provided a service that really resonated with the public.

Telco company iiNet achieved the maximum five-star rating for overall satisfaction, winning our Most Satisfied Customers award for 2015. iiNet beat its nearest competitor Amaysim into second place on four stars, as well as the other brands we rated: these were Virgin, TPG, Telstra, Optus and Vodafone, each of which achieved three stars overall, as well as Vaya which achieved two. The full breakdown of our results is below.

The value stakes are absolutely crucial for a post-paid phone plan. Over three-quarters of Australian customers told us they switched to a contract to get better value for money, and with Australia’s average monthly spend sitting at a hefty $62, you’d expect to be getting a lot of inclusions (and a cutting-edge mobile phone) for your money. In an interesting trend, it was the smaller telcos with less market share which provided the most bang for your buck: both iiNet and Amaysim scored five stars for value, whilst Virgin, TPG and Vaya each scored four stars; the big three network operators Telstra, Optus and Vodafone all scored three stars.

The customer service that a telco provides can make a big difference between retaining customers and losing them. Phone plans are notoriously tricky to understand, so a company which provides extensive customer care when it comes to buying and maintaining your plan is bound to get positive reviews. It was iiNet which provided the most satisfying service with a five star rating, followed closely by Amaysim with four stars. Next on the ratings podium were Virgin, TPG, Telstra, Optus and Vodafone with each brand achieving three stars.

A mobile phone company needs to be accessible through multiple communication channels, including email, online feedback, over the phone and through good old paper mail. Missing out on a single one of these channels can mean alienating an entire demographic of potential customers, which explains why our rated brands were so keen to get it right: iiNet took out the top honours with a five star rating for accessibility, whilst an impressive four brands – Amaysim, Virgin, Telstra and Optus – achieved four stars.

Similar to the accessibility rating is the clarity of a brand’s billing practices – can you receive your bill online or through the mail? Are the fees transparent and easy to understand? The Aussies we surveyed once again thought that iiNet provided the most satisfying service when it came to billing, with the brand scoring another five-star rating in this criterion. The other standout performers were Amaysim and Virgin with four-star ratings, followed by TPG, Telstra, Optus and Vodafone on three.

Coverage was a big driver of satisfaction for Aussie customers, and that’s no surprise: there are few things more frustrating than not having reception when you need to get in contact with someone quickly. Fortunately, Australia’s major networks now cover all but a tiny fraction of our population, and speedy 4G coverage is also being rolled out rapidly in major cities (if you’d like to know more about how 3G and 4G work, check out our handy guide). In an upset to iiNet’s perfect record, it was major player Telstra which took the five-star honours for network coverage, outscoring iiNet and Amaysim on four stars each with the remaining brands on three stars.

With nearly a third of mobile plan users telling us that data inclusions were the most important feature in their contract, it pays for a telco to provide ways for you to track and minimize your data usage. iiNet topped the satisfaction ratings with five stars once again for the data management tools they provided to their customers, and behind them came Amaysim on four stars.

Choosing between a plan and prepaid for your phone is largely dependent on how you use your device, making it a very personal choice. The following are the pros and cons of each to help you find the right option for your phone:

Choosing a plan, or post-paid, for your phone can have a number of benefits. It allows almost unlimited use and, depending on the plan, makes it easy to upgrade. It can also be a more affordable option if you “purchase” a phone on a plan, paying $0 upfront. Plans are suitable for those who use their phone a lot, such as those who use their phone for work or don’t want to worry about how much they use their device.

The downside of a plan is that it can be easy to go over the monthly fee and rack up a larger bill. It’s easy to lose track of how much you have used. It also locks you in for a year or more, making it difficult to switch plans or providers.

There are many benefits to prepaid that can suit a wide range of phone users. The idea behind prepaid is that you pay for the allowance in advance, giving you a specific amount of phone credit and data to use. This makes it useful for those with smaller budgets, those who have fixed incomes or if you are paying for someone’s usage, such as parents paying for their child’s phone. Also, unlike plans, you are not committed to one company and one deal for several years.

The downside to a prepaid phone is how much it may limit your phone use. Once you run out of credit, you will need to top up again. This can be a good way to limit phone use, but bad for those who use their phones a lot, particularly for work purposes.

For more information about phone plans and prepaid credit, read our articles on what to think about and which is better.

The top rated brand for 2014, Amaysim is the only plan provider to receive top marks in all categories (value for money, service, accessibility, billing and overall satisfaction) except network coverage, where it obtained 4 stars. amaysim specializes in providing contracts with no lock-in contracts, allowing users to leave when they like. They offer monthly and prepaid plans on 4G and 3G networks. Their top offering provides unlimited calls and texts, and 7GB of data while their prepaid option allows you to pay for what you use as you go. amaysim also allows international roaming and the purchase of additional packages of mobile data.

Second on the list, TPG has 4 stars across the board, making it the perfect all-rounder that is also a well-known provider.

One of the big brands, Optus has 4 stars in most categories, getting just one less for value for money and overall satisfaction. Optus offers a large variety of mobile plans to suit all users, with no lock-in contract and no cancellation fee, SIM-only plans and contract plans which come with a choice of several popular phone models. You can even share the data from your plan across multiple devices for a one-off fee of $5.

Known for its excellent network coverage, it’s no wonder Telstra was the only company to receive 5 stars in this category. It received 3 and 4 stars in other areas. Telstra offers a range of mobile services, from phone inclusive contracts, no lock-in SIM only plans and prepaid phones and SIMs. Plans range from $35 to $135 a month and often come with digital media packages like access to the AFL or NRL online. Telstra also offers data sharing between devices, allowing families or those with more than one mobile-capable device to share a pool of data.

Virgin, a popular plan provider, received very similar ratings to Optus in 2014. Virgin offers prepaid and contract products ranging from $20 to $60. Their offer bundles with a select range of phones as well as sim only plans. All Virgin contracts come with data rollover as standard, allowing customers to keep unused data from one month to the next.

Vodafone At the bottom of the list, Vodafone has a standard of 3 stars across the board.

What are ‘shared phone plans’?

Shared plans refer to combining a number of plans to access more value and “share” data and credit across a number of users. This is particularly popular for families and businesses as it means that users who do use a lot can access data and credit from those who don’t. It also makes it easier for the household or company when it comes to bill time as there is only one data allowance to manage versus several across many people.

If you are looking at getting a phone plan for your mobile device, there are a number of things you need to consider. This includes what you use your phone for, value for money from the plan (such as unlimited texts or calls, as well as any hidden expenses that reduce value), the provider’s quality of customer service, accessibility in getting and using the plan, how billing works (is it easy to understand? Can you go paperless or set up direct debit?) and how good the network coverage is.

Canstar Blue commissions Colmar Brunton to survey 3,000 Australian consumers across a range of categories to measure and track customer satisfaction. The outcomes reported are the results from customers within the survey group who have an active post-paid mobile phone account in their name for which they pay the bills – in this case, 1,823 Australians.