You are viewing the archived ratings for Blenders. Go to the current Blender ratings.

Find the best blender for your kitchen with Canstar Blue’s customer satisfaction ratings and review.

Show Important Notes^* Hide Important Notes^*
* Overall satisfaction is an individual rating and not a combined total of all ratings. Brands with equal overall satisfaction ratings are listed in alphabetical order.
^ By clicking on a brand or ‘details’ button, you will leave Canstar Blue and be taken to our referral partner to compare. You agree that Canstar Blue’s terms and conditions apply to this referral. If you click on a brand that our referral partner does not cover, you will be taken to a brand page on Canstar Blue.
Canstar Blue research finalised in August 2016, published in September 2016. 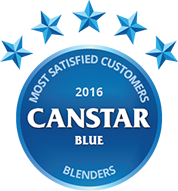 For the second year in a row, Nutri Ninja has chopped through the competition to top our customer satisfaction ratings for blenders.

In this fast-paced, health-conscious world of ours, it makes sense that Australian households are impressed by the sheer speed, power and nutrition-extracting brilliance of our top of the range blenders. The clunky old appliances of the past have made way for a new breed of slimline, easy to use, convenient blenders which simply deliver amazing results. The power they now boast is out of this world, and suitably impressed, we have turned into a national of blender junkies – desperate to get our hands on the best blenders around. So, which brand do Aussie consumers rate highest?

Few could really argue that Nutri Ninja and NutriBullet haven’t changed the way we think about blenders, so it should come as no surprise that these two brands have dominated our ratings for blenders since we started reviewing them in 2014. First to win our award was NutriBullet, but in the last two years there has been a shift, with Nutri Ninja rated higher than any others.

Nutri Ninja and NutriBullet have turned blending into a fine art, continuously evolving and raising the stakes as they compete to offer the most powerful, best-performing blenders available to us mere mortals. In their efforts to improve the efficiency and results of our nutrition-extraction, NutriBullet has reached the NutriBullet Rx, which now boasts a 1700 watt motor and new heating capability, meaning you can now make soups and hot dips, in addition to your favourite cold smoothies. The Rx also comes with new hands-free smart technology, delivering perfectly consistent results without the need to manually operate the blender. 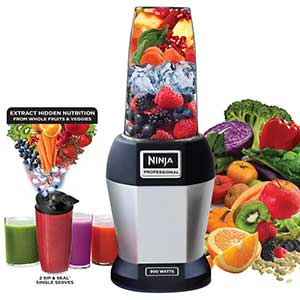 Nutri Ninja is blazing a trail of its own, introducing the Auto IQ System to its impressive line-up. With a 1500 watt motor, it’ll blast through just about anything with its Pro Extractor Blades and intelligent design, and its precision food processing option lets you make baby food, purees, dips and spreads in seconds. Make no mistake, NutriBullet and Nutri Ninja have changed the way consumers think about blenders, with the likes of Breville, Kambrook and Sunbeam forced to up their game. For now though, Nutri Ninja leads the way in our customer ratings.

Given their unrivalled prowess in blasting through fruits and vegetables like they’re not even there, blenders have helped consumers incorporate more healthy foods into their daily routine of food intake. In fact, for many people, their blender has become as integral part of maintaining a healthy, balanced diet. The rise in popularity of superfoods such as kale, chia seeds and goji berries can even be attributed to the likes of Nutri Ninja.

Our survey of more than 1,000 consumers, who have recently purchased a new blender, found that a healthier lifestyle change was a motivation for 65% of them to splash the cash, and more than half of them (53%) went on to say their blender has helped them achieve their health goals.

When it comes to buying a new blender, the greatest driver of customer satisfaction is performance, our research shows, and it makes perfect sense. Almost half of our survey respondents (47%) do not use their blender as much as they thought they would – and you can hazard a guess that underwhelming performance is an attributing factor in an age when it’s really all about power and the end result. Nutri Ninja was the only brand to score a five-star rating for performance, with most of the rest picking up four stars in this area.

Which blenders provide the best value for money? They’re certainly not cheap, with Aussie consumers spending an average of $138 on their most recent purchase, our survey found. You could pay as much as $600 for a top of the range blender, so our average figure suggests we are split down the middle when it comes to buying cheap and expensive models. In the value stakes, only Russell Hobbs achieved a five-star review from consumers. It was four or three stars for the rest of the field.

As blenders continue to evolve, and brands attempt to stand out from the crowd, functions other than the simple process of blending your food start to play more of an important role. As we mentioned, the NutriBullet Rx comes with a heating option, while other brands have been thinking more outside the box – literally. The latest Kinetix Twist blender from Breville comes equipped with a ‘citrus cone’ accessory, which allows you to squeeze juices like lemon or lime directly into the blender. In our ratings, it was all pretty even with most brands scoring four stars in the features department.

Everyone with a blender will have their own favourite recipes or smoothies. But you can only replicate your favourites daily treat if your blender allows it. This means it has to produce the same, consistent results every time. This seems like one of the minimum requirement of any half decent blender, but as our results show, some are better than others in this department. Nutri Ninja was the only brand to rate five stars for consistency, while most of the rest had to settle for four stars.

Although blenders are becoming more sophisticated, the good news is that most remain easy to operate. That can’t be said for them all, however, as our ratings show some blenders could be easier to use, with three brands rating just three stars. Nutri Ninja was again the only brand to receive a five-star review in this area.

The only downside to blending all those amazing superfoods is that they can make one hell of a mess. Cleaning up after you’ve made your favourite smoothie is the boring part of living with a blender, but at least some brands have made the cleaning bit as easy as possible. Nutri Ninja and NutriBullet both ranked five stars for ease of cleaning, with most others way behind on three stars.

Canstar Blue commissioned Colmar Brunton to survey 3,000 Australian adults across a range of categories to measure and track customer satisfaction. The outcomes reported are the results from customers within the survey group who have purchased and used a new blender in the last two years – in this case, 1,019 people.