Compare some of the best clothes iron brands with our customer satisfaction ratings.

Show Important Notes^* Hide Important Notes^*
* Overall satisfaction is an individual rating and not a combined total of all ratings. Brands with equal overall satisfaction ratings are listed in alphabetical order.
^ By clicking on a brand or ‘details’ button, you will leave Canstar Blue and be taken to our referral partner to compare. You agree that Canstar Blue’s terms and conditions apply to this referral. If you click on a brand that our referral partner does not cover, you will be taken to a brand page on Canstar Blue.
Canstar Blue research finalised in July 2016, published in August 2016. 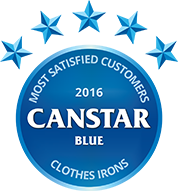 Tefal has received Canstar Blue’s inaugural award for Most Satisfied Customers – Clothes Irons. Its irons have clearly impressed Aussies, with five-star ratings in most criteria, including overall satisfaction.

Tefal top of the ironing (ratings) board

For most of you reading this, ironing your clothes probably ranks among your least favourite of chores. Yet while clothes irons are probably not something you think about too often, making a poor-quality purchase can cost you in the long run.

Our survey of Australian adults, who have bought a new clothes iron in the last two years, found that about one in five (22%) tend to buy cheap irons and simply replace when they break. Additionally, 32% of survey respondents say a malfunctioning iron has ruined a piece of their clothing – imagine if that was your favourite shirt!

A quality clothes iron is a smart investment, but unless you’re a real ironing enthusiast – and the chances are you’re not – then you’re probably not aware of which iron brands are considered the go-to for the best results and reliability.  It’s not always as simple as price reflecting quality. That’s why Canstar Blue has endeavoured to help Aussie consumers make a more informed purchasing decision by commissioning nationwide research, to find out which brands are rated highest. We don’t want you left feeling hot under the collar!

After canvassing the opinions of 850 consumers, we can reveal that Tefal has won Canstar Blue’s inaugural award for Most Satisfied Customers – Clothes Irons 2016. It was the only brand to earn five star ratings for effectiveness, weight (i.e. not too heavy) and overall satisfaction. It also achieved top marks in regards to durability, design, ease of use and functionality.

Tefal’s linen care appliances include a large range of steam irons, garment steamers and steam generators. Tefal irons range in power, features and prices accordingly, meaning most shoppers can find something to suit their needs.

How much do clothes irons cost?

According to our research, consumers spent an average of just under $80 on their most recent clothes iron. A quick look on Appliances Online shows that you could pick up a basic iron for just $45, with prices increasing up to a whopping $800!

When it comes to the type of irons Aussies are buying, 13% of survey respondents declared having a cordless iron, while 24% have a steam iron system (i.e. the iron is attached to a steam station). Nearly one in five (18%) also own a travel iron.

What to look for in a clothes iron

Before setting off to purchase a new iron, it’s important you understand the two main types.

What iron features are available?

Modern clothes irons come with a range of features designed to make ironing easier, safer and more effective. Some of the most useful design and utility features to consider include:

Soleplate: The soleplate is the main determinant of how smooth your iron feels. Soleplates are usually made of aluminium, stainless steel or ceramic, with aluminium usually being the least smooth of the three. Soleplates may also have a special design or non-stick coating to improve glide ability. The shape of soleplate is also critical for the iron’s manoeuvrability. Soleplates with curved edges, or ones which are separated slightly from the body of the iron, are easier to use when working around buttons.

Descale system: Over time, your iron will generate scale deposits which clog your iron’s valves and soleplate holes – inhibiting its steam output. Look for an iron that has a simple self-clean function.

Cord: Irons can come with or without a cord. Cordless models afford more manoeuvrability. However, they are generally a little more expensive. If you choose a corded model, look for something with cord storage so it can be put away neatly.

Steam controls: Variable steam controls allow you to adjust the steam output to smooth out any creases thrown your way.  Some also have a vertical steam function for ironing hanging fabrics (e.g. curtains), as well as steam bursts for those troublesome spots.

Weight and size: While it might seem obvious, it’s easy to overlook the size of the iron – especially if you shop online. Lighter models of irons are usually the most manoeuvrable, however heavy models require less downward force in order to effectively remove creases.

Warning alarm: Irons pose a fire hazard when left unattended. Fortunately, most these days should include a feature that will ring an alarm if a heated iron is left down motionless for too long. For even greater safety, some irons will include an automatic shutdown feature in similar circumstances.

Canstar Blue commissions Colmar Brunton to survey 3,000 Australian consumers across a range of categories to measure and track customer satisfaction. The outcomes reported are the results from customers within the survey group who purchased and used a clothes iron in the last two years – in this case, 850 Australians were surveyed.