New iOS & Android tablets have fast become a staple in Aussie homes. Find out what Australians think of their latest purchase in our tablet customer satisfaction ratings.

Show Important Notes^* Hide Important Notes^*
* Overall satisfaction is an individual rating and not a combined total of all ratings. Brands with equal overall satisfaction ratings are listed in alphabetical order.
^ By clicking on a brand or ‘details’ button, you will leave Canstar Blue and be taken to our referral partner to compare. You agree that Canstar Blue’s terms and conditions apply to this referral. If you click on a brand that our referral partner does not cover, you will be taken to a brand page on Canstar Blue.
Canstar Blue research finalised in October 2015, published in December 2015. 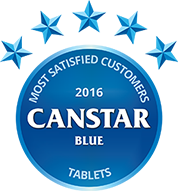 Apple has been crowned with our Most Satisfied Customers Award for 2016, topping the overall satisfaction ratings with five stars. The company also achieved the top rating in several major criteria, reflecting the dominance that the various iPad variants have over the tablet market.

Tablet computers are the obvious compromise between mobile phones and full-on laptop or desktop computers. They offer the portability, intuitive touchscreen control and lightweight operating system of a phone, with more of the size and power you’d expect from a larger machine, making them perfect as a communal hub for media, web browsing and loads more.

The tablet market is becoming increasingly saturated, meaning that hardware manufacturers are coming out with better products all the time in an attempt to stay on top of the game. Features such as full HD screens, larger and larger form factors, 4G connectivity and more are all becoming the norm in high-end tablets. The question is this: when tablet quality is so high, how can you tell which ones are the best?

To help you get your hands on the hottest hardware around, we’ve surveyed Australian tech buyers across the country on what they think about the major tablet brands. Having rated Australia’s tablet manufacturers in criteria such as value, user friendliness, battery life and more, we’ve found one brand which really hits the mark. Apple has been crowned with our Most Satisfied Customers Award for 2016, topping the overall satisfaction ratings with five stars. The company also achieved the top rating in several major criteria, reflecting the dominance that the various iPad variants have over the tablet market.

Whilst Apple’s products provided the most overall satisfaction, strong ratings were also achieved by Microsoft, Samsung and Lenovo, each of which secured four stars overall. Behind them came computer brands Acer and Asus with three stars each. With several brands giving five-star performances in other criteria across the board, there’s a lot to look for if you’re in the market for a tablet computer. For a detailed breakdown of each metric, read on.

Unlike top-end smartphones, which tend to be a platform for introducing the latest tech innovations, tablets tend to contain tried and tested hardware in an appealing package. When combined with a lack of phone hardware and (often) mobile connectivity, they’re often surprisingly good value compared to their smaller counterparts. The top brand for value was computer manufacturer Lenovo, scoring five stars, whilst the other brands all achieved four stars with the exception of Asus on three.

Good customer service is the bedrock on which most successful businesses are built. It’s just as important for tech companies, which sell products that some people struggle to use. When it came to after sales support for your device, including hardware and software troubleshooting, Aussie customers just couldn’t go past Apple. The company famed for its ‘Genius Bars’ – where enthusiastic employees help you solve your problems – scored five stars for tech support. Apple was followed by Samsung, Lenovo and Microsoft, all on four stars. If you’re after comprehensive support for your new tablet, it seems you can’t really go wrong.

A tablet is intended to be a device you use every day, for watching movies, browsing the web, checking emails and much more. It needs to be an easy, intuitive thing to use. Whilst touchscreens certainly help create a more natural control interface, there can still be a big difference between an ergonomically designed tablet and one that’s nothing but a pain to use. The easiest tablet to operate, according to our survey, was Apple’s iPad. The five-star achiever is renowned for the clean, colourful aesthetic used in its software, iOS 9, and so it proved in our ratings. The other brands we rated had a strong showing, will all achieving four stars with the exception of Asus on three.

Being more cumbersome than smartphones, tablets equipped with cameras aren’t often used as your main source of photographs. However, they’re still very useful for snapping pics around the house or out and about, meaning a decent camera is definitely a consideration. As you’d expect from its success with the iPhone, Apple also took out the five-star rating when it came to tablet cameras. Featuring front and rear iSight cameras, the iPad (in all its variations) tends to set the standards for tablet photography. Runners-up to Apple in the camera department included Samsung and Lenovo on four stars, as well as Asus, Acer and Microsoft on three stars.

Battery life is hugely important for a device which is often subject to heavy communal use. Upsetting Apple’s dominance here was Microsoft, which achieved five stars for battery life satisfaction thanks to its Surface and Lumia tablet computers. The rest of the field performed admirably nevertheless, with Apple, Samsung, Lenovo and Acer all scoring four stars for their battery efforts. Asus rounded out the field with three stars.

Tablets are a tricky piece of hardware to get right from physical perspective. The come in several shapes and sizes, from under 7 inches across to around 10 inches, a massive difference in screen size. The boundary between a one-handed and a two-handed tablet is a blurry one, with manufacturers having to carefully design their latest product to maximise portability and usability. The top brands have evidently been putting in effort towards ergonomics, for an incredible three brands scored the maximum five stars for ease of handling – Microsoft, Apple and Acer. On four stars were Samsung and Lenovo, whilst a three star rating was achieved by Asus.

Canstar Blue commissioned Colmar Brunton to survey 3,000 Australian consumers across a range of categories to measure and track customer satisfaction. The outcomes reported are the results from customers within the survey group who have purchased a new tablet computer in the last two years – in this case, 1,012 people.