Is it time to turn off your existing gas supplier? Compare gas providers in Victoria with Canstar Blue’s customer review and ratings. 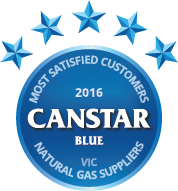 The energy company that promises to keep things simple has topped our latest customer ratings for natural gas retailers in Victoria, Simply Energy.

Gas plays an important role in the lives of most Victorian families, but it’s something that’s easy to take for granted, until you get your next bill. Complaining about constantly rising power costs is something we all do, but not all of us are proactive in comparing providers to try and secure a better deal, often because it’s perceived to be a rather labour-intensive and ultimately fruitless exercise. Well, it’s not. In this report, Canstar Blue looks at the natural gas suppliers operating in Victoria and what you need to know to get a better deal.

Before we go into detail, let’s first discuss our new customer satisfaction ratings for gas retailers in Victoria. Every year, Canstar Blue surveys hundreds of bill-payers around the state to find out how their providers are stacking up, based on variables including bill clarity, customer service and value for money. Seven different gas suppliers featured in this year’s results, with Simply Energy the pick of the bunch.

Replacing Lumo Energy at the top of the ratings after its two-year stint, Simply Energy received five-star reviews from customers with regards to energy efficiency advice, value for money and overall satisfaction. Lumo Energy earned four stars overall this time, as did Momentum Energy and Red Energy. It really was a battle of the ‘energy’ companies. On three stars overall are the state’s three biggest energy retailers – AGL, EnergyAustralia and Origin. Make of that what you will.

While these ratings feature seven of the most prominent gas providers operating in Victoria, there are a handful of others to choose from, most notably Dodo Power & Gas, Alinta Energy and Click Energy.

About the Victoria gas market

Victoria now has a hugely competitive gas market, but that hasn’t always been the case. Since 2002, households around the state have been able to move from standard contracts to market offers with different providers but with price regulations, there would have been little financial incentive to do so. However, the Victorian Government lifted energy price regulations for both gas and electricity in 2009, paving the way for new companies to enter the market and challenge the dominance of the incumbents. That’s exactly what has happened, with providers such as Simply Energy, Lumo Energy, Momentum Energy and Red Energy offering competitive plans and often superior customer service.

While competition is important, it can also lead to confusion, with multiple gas contracts now offered by most retailers. This makes it hard to work out which offer is right for you. However, before talking about plans, let’s first go over the basic information you’ll need to know in order to get a better deal.

There are two types of gas contracts in Victoria – standard contracts and market contracts.

Market contracts should always work out the cheaper option, but only if you stick to the terms and conditions of your plan. Failure to do so could leave you paying significantly more.

Whether you have a standard contract or market contract, the amount you pay is determined by two main charges – supply costs and usage charges.

The easiest way to compare two different gas providers is to check out their supply and usage charges. In Victoria, these costs can vary significantly between providers. Some may appear to have cheaper supply prices, but these could be made up for by higher usage rates, or vice versa.

Also, be aware that most plans come with variable rate charges, meaning the amount you pay could be changed by your provider at any time. Some gas retailers offer plans with fixed rates – meaning your supply and usage charges are locked in for a set period – but there are pros and cons to these types of plans.

Natural gas prices are charged in cents per megajoule (the unit of measurement for gas). Peak time gas usage rates will typically cost between 2.5 and 3 cents per megajoule. To put this into perspective, your gas oven probably uses around 12 megajoules an hour. It’s important to have a handle on gas prices to help you monitor and act on your usage.

If you have a time of use tariff, the amount you’ll pay for gas will change depending on the time of day you use it. In Victoria, gas usage is broken into daily ‘blocks’, with the first block of power usually costing the most. For example, you could:

These rates are typical of peak-time gas usage costs. However, you can expect cheaper rates if you use gas at off-peak times. The majority of households in Victoria now have smart meters and are therefore able to use flexible pricing tariffs.

You may not realise, but one of the biggest factors in determining the price you pay for energy is your location. Melbourne and the rest of Victoria is split between various energy distributor networks, with different companies responsible for maintaining and improving the often vast infrastructure that transports gas or electricity to your suburb. While there are five electricity distribution networks, households are divided into three gas networks:

This is useful to know – not only because these companies are who you will need to contact if you have a problem with your gas supply, but because the network you live on has an impact on your overall costs. Energy distributor costs can account for up to 50% of your overall energy bills.

How to get a better deal on gas in Victoria

Whether you’re buying gas or electricity, the key to getting a better deal is understanding the factors that determine the costs you’ll need to pay, including your contract type, plan, tariffs and charges. In summary, here are some questions that are worth asking any prospective gas provider in Victoria:

Remember that the Victoria gas market is hugely competitive, with more than 10 different gas providers all competing for your custom. This puts you, the customer, in the driving seat. Make sure you shop around for the best deal for you and don’t be afraid to switch if you’re not 100% satisfied with the price you’re currently paying or the servicing you’re receiving.

Canstar Blue commissioned Colmar Brunton to survey 6,000 Australian adults across a range of categories to measure and track customer satisfaction. The outcomes reported are the results from customers within the survey group who live in Victoria and pay the gas bills in their household – in this case, 1,090 people.