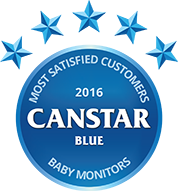 Oricom has received Canstar Blue’s inaugural award for most satisfied customers – baby monitors. Oricom rated 5 stars in overall satisfaction as well as most other criteria.

If you’re a parent or carer for a young child, then you’re probably well aware just how valuable a baby monitor is. They provide peace of mind that your little one is resting safe and sound while in their room and out of sight.

Canstar Blue understands that parents (or soon to be), have a lot going on, so to save you the time and hassle of comparing baby monitors, we’ve done it for you!

Canstar Blue commissioned a nationwide survey, asking Australians who had bought a baby monitor in the last two years what they thought about their product. After hearing from over 400 respondents, we are pleased to announce that Oricom rated 5-stars in overall satisfaction – the highest of the compared brands.

Oricom holds itself out as an expert in communication, and consumers appear very satisfied with their range. It produces a range of audio and visual baby monitors, as well as breathing movement monitors. Some of its products boast leading monitoring technology, and are offered in a range of prices to suit different budgets.

How much do we spend on baby monitors?

Many models of baby monitors come with a myriad of features including touchscreen controls, live video feeds, lullaby players, light shows and temperature monitors, to name a few. Yet while parents can usually find a basic baby monitor at a relatively affordable price, additional features will usually come at a cost. So how much are we spending?

According to Canstar Blue research, the average Australian spends $170 on a baby monitor.

Interestingly, Queenslanders said they only spend $130, while on the other end of the spectrum, Victorians spent $188 and South Australians slightly more at $193.

Canstar Blue commissioned Colmar Brunton to survey 1,300 Australian parents across a range of categories to measure and track customer satisfaction. The outcomes reported are the results from customers within the survey group who have purchased a baby monitor in the past 2 years – in this case, 419 Australians were surveyed.