Looking for the best childcare centre for your son or daughter? Compare childcare providers in Australia with our customer satisfaction ratings. 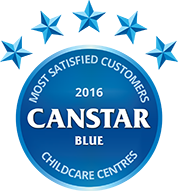 G8 Education has risen to the top of the class, awarded five stars by Aussie parents and topping our ratings table for childcare providers.

G8 Education rated top of the class for childcare

All parents want the best for their child – whether it’s food, clothes, strollers or their childcare centre. But finding the best childcare provider in your area can be a real challenge. You’ll want a centre where the staff not only take good care of your child, but also keep them entertained, hopefully teach them a thing or two, and keep them full with some quality food. They must also be good at communicating with you, the parent, and provide the flexibility you need to be able to go about your own business between dropping them off and picking them up again. Oh, and if you can get all this at a reasonable price, then even better.

Mums and dads have a reputation for demanding a lot from their childcare provider but as paying customers, they have every right to – especially when you consider how much childcare can cost, which we’ll come to shortly.

No parent should settle for a childcare centre that isn’t up to scratch. That’s why Canstar Blue produces an annual review of childcare providers to see which are deemed to offer the best overall service. This year we did this by asking more than 1,000 mums and dads about their experience with the centre they send their child to. Seven of the biggest providers in the country have featured in our results, some of which cover numerous childcare brands.

G8 Education rated five stars for facilities & equipment, quality of food, flexibility (i.e. opening and closing times, and being able to meet any specific requests) and educational activities – an area G8 prides itself on. It rated four stars on value for money and its communication with parents.

How much does childcare cost?

Childcare is not cheap. In fact, one in three parents who took part in our survey (34%) admitted they often struggle to pay their bills on time. In addition, more than half of mums and dads (53%) said the cost of childcare is their family’s greatest cause of financial concern.

We found that parents spend an average of $343 every fortnight on childcare, after any benefits and subsidies they receive. That’s almost $9,000 over the course of a year. But the cost of childcare doesn’t stop there, with one in three parents (36%) also paying for additional classes or activities for their child.

If you think you’re paying too much for childcare, make sure you are getting all the financial support you are entitled to. There are two types of financial assistance available, which can be claimed directly through your childcare provider.

Despite these Government benefits, the cost of childcare remains a major issue for many parents. Almost a third of mums and dads (32%) told us they’re considering changing centres, and the most common reason for wanting to do so is the cost.

While the cost of childcare remains a problem for some parents, the good news is that the majority of survey respondents (86%) think their childcare provider has a good reputation. Not all mums and dads are happy with their childcare centre though, with one in three (34%) admitting it wasn’t their first choice. Indeed, securing a place in childcare is the first challenge that parents face. In fact, 8% of parents told us they chose the centre they did because it was the only one they could get their child into.

What about those parents who did have a choice? What were they looking for from a childcare centre? We asked mums and dads what the most important deciding factor was for them:

In addition, 9% of parents said having friends or family with children at the same centre, or their child having friends at the centre, was their biggest reason for choosing the one they did.

Not everything works out as planned, however, and for those parents who would now like to switch childcare centres, their reasons were as follows:

In addition, 14% of parents cited reasons to do with their family or friends.

What to expect from a childcare centre

It’s easy to forget that as parents, you are paying customers, and are entitled to expect a great service from your childcare provider. Our research identified good communications between centre and parents as the greatest driver of customer satisfaction, but mums and dads are also determined to see a good educational program in place, and of course they want to feel like they’re getting value for money.

Not all children are the same, and not all parents work the same hours, so it’s good to know your childcare centre is flexible with regards to opening hours, and any specific requirements your child has. For flexibility, Affinity Education, G8 Education and Goodstart Early Learning earned five star reviews from parents. It was four stars for Guardian Early Learning, KU Children’s Services, Mission Australia Early Learning and YMCA Child Care.

It’s worth keeping in mind that not all childcare centres provide food for your child, so you may need to bring your own. In our ratings, only G8 Education scored five stars for food, with Affinity Education, Goodstart early Learning, Guardian Early Learning, and YMCA Child Care all receiving four stars. KU Children’s Services and Mission Australia Early Learning got three stars.

When you leave your child at childcare, you’d like to do so in the knowledge that they have plenty of fun activities and equipment on hand to enjoy throughout the day. However, this may not be the case. G8 Education was the only childcare provider to earn a five-star review in this area, followed by Affinity Education, Goodstart Early Learning, Guardian Early Learning, KU Children’s Services and YMCA Child Care all on four stars. Mission Australia Early Learning got three stars.

It’s worth remembering that no two childcare centres are the same – they will all have their own staff, their own facilities and their own way of doing things. However, these ratings should hopefully give you an idea about what to expect from some of the biggest childcare operators in Australia.

Canstar Blue commissioned Colmar Brunton to survey 7,000 Australian parents across a range of categories to measure and track customer satisfaction. The outcomes reported are the results from customers within the survey group who have a child who has attended childcare in the last 12 months – in this case, 1,010 Australian parents.