Looking for a new pram or stroller? Aussie mums and dads have their say. Compare the biggest and best brands with Canstar Blue’s customer satisfaction ratings. 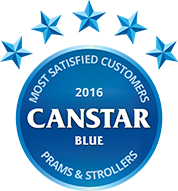 Baby Jogger has taken over from Valco Baby at the top of our customer satisfaction ratings for prams and strollers. It was also the only brand to earn five stars for handling & steering.

Nothing can match the thrill and excitement of learning you’re expecting, particularly for the first time. But a few weeks into pregnancy, the joy will be overtaken by the need to plan – and buy everything you’re likely to need, including a new pram, and perhaps a new stroller later.

No one ever said being a parent was easy, and certainly no one ever said you could do it on the cheap – buying a pram for your newborn could be the greatest expense you’ll face before your baby comes along, perhaps with the exception of a car seat. That’s why it’s important to find the best pram for yours and your baby’s needs. This could mean buying a trendy, expensive pram and becoming the envy of your parent friends, or just a relatively affordable model that does the basics well.

To find out which brands are currently impressing Australian parents most, Canstar Blue surveyed more than 1,200 mums and dads who have purchased either a new pram or stroller within the last three years, and their opinions are reflected by the star ratings you see above. As many brands produce both prams and strollers, and given their hybrid nature (some models could easily be considered both ‘pram’ and ‘stroller’), we’ve decided to combine the results to give you the ultimate overview of both types.

Nine major brands featured in the results, and one of the most well-known stood out from the rest, Baby Jogger. It means Baby Jogger replaces Valco Baby at the top of the ratings from 2015, with five-star reviews in regards to handling and steering, and ease of folding, in addition to overall satisfaction. Honourable mentions also go to Love N Care and Steelcraft for achieving two or more five-star ratings. In fact, six out of the nine brands scored at least one five-star review, but none could match Baby Jogger for the overall prize. 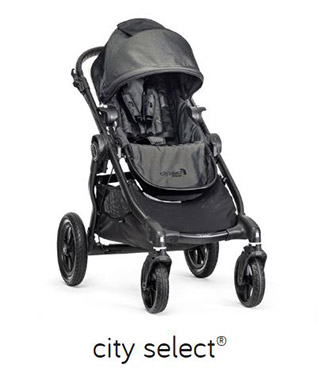 Baby Jogger provides a great example of modern day prams and strollers, with its products encompassing the characteristics you’d normally associate with both types. Put simply, these are products that provide the safety and comfort of a traditional pram, but also the flexibility and convenience of a stroller. Take the Baby Jogger ‘City Select’ (pictured) for example. Baby Jogger says:

“Whether you’re looking for a travel system, a pram, a double stroller, a triple, or just a single, the City Select could be the only stroller you’ll ever need.”

This new breed of prams and strollers gives parents the best of both worlds, but some brands continue to produce models that match more traditional definitions of one or the other.

What to look for in a new pram or stroller?

With a baby on the way, it’s time to start thinking about buying a pram/stroller. As we mentioned earlier, this is likely to be one of the most costly items you buy for your baby – with one in four parents spending more than $1,000 on a pram, our research shows – so make sure you get it right. So what things do you need to consider to make sure you’re getting the right one for your needs? We asked our survey respondents who have recently bought a new pram what factors they considered:

As you can see, there are plenty of things to consider, which is probably why some parents will agonise over which pram to buy. It can also be the subject of much debate – our survey found that 29% of parents argued with their partner over how much to spend. We also found that:

Ultimately though, safety should be your first and last thought when it comes to what you push your child around in. It’s easy to get lost in the style and features of modern day prams and strollers, but remember to take a step back and consider what is best for your child. We hope our customer ratings prove helpful.

Canstar Blue commissioned Colmar Brunton to survey 1,300 Australian parents across a range of categories to measure and track customer satisfaction. The outcomes reported are the results from customers within the survey group who purchased a new pram or stroller in the last three years – in this case, 1,248 Australian parents.