You are viewing the archived 2016 ratings for supermarkets. Go to the current supermarket ratings.

Whether it’s a quick-stop or your weekly shop, see how your supermarket compares using our Customer Satisfaction Ratings. 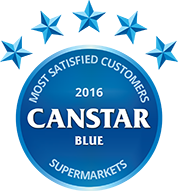 The results of our 2016 consumer research once again saw ALDI dominate in overall satisfaction, winning its 5th award for Most Satisfied Customers – Supermarkets.

We spend billions of dollars at our local supermarket every year, and despite there only being a handful of big brands, it remains one of Australia’s most competitive markets. Supermarkets spend a lot of money on aggressive media campaigns advertising competitive prices, weekly specials, and even celebrity chefs – so it’s not always easy to see who is truly delivering on satisfaction.

You’re probably familiar with the saying – “The customer is always right”. Whether you believe this or not, one thing is certainly true – the customer’s opinion is the most important. That’s why in our endeavour to find Australia’s favourite supermarket, Canstar Blue surveyed thousands of shoppers across the country, asking them to rate the supermarket they shopped at most recently across several key criteria.

The results of our 2016 consumer research once again saw ALDI dominate in overall satisfaction, winning its 5th award for Most Satisfied Customers – Supermarkets.

Since arriving on our shores in 2001, ALDI has shaken up the industry, becoming a serious threat for supermarket giants Coles and Woolworths. Their focus on value for money through private labels has resonated well with Australians, and enabled them to recently expand into South Australia and West Australia.

What Aussies want from their supermarket

Most Australians will frequent their local supermarket – after all, everyone needs groceries. But did you know according to our research, the average Australian spends $133.78 on groceries per week.

Canstar Blue research also showed that 70% of Australians usually shop at the same supermarket chain. When we asked why, the main reasons given were:

For those who had switched to another supermarket chain in the last year, the main reasons given were:

Self-service checkouts remain a relatively recent development in Australia, yet they’ve undeniably reshaped our supermarket experiences. While the technology in its early days was marred with concern of its effect on job security, consumers are becoming increasingly attracted to the convenience these systems offer.

66% of Australians say they find self-checkouts easy to use, while 47% now say they prefer the self-serve machines to traditional cashier-operated check outs. As might be expected, younger generations are much more on board with self-serve shopping, with 74% of respondents aged 18-29 saying they prefer self-serves, compared to only 30% of those aged 60-69.

84% of those who prefer self-service checkouts say it’s because they find them quicker to use, while 11% just don’t like interacting with checkout operators.

What annoys us about supermarkets?

It doesn’t matter how great your local supermarket is; there will occasionally be something that gets under your skin. As part of our research, some of the biggest pet peeves recorded include:

Other bugbears included trying to find a park, poor store layout and not being able to find a staff member to assist them.

Canstar Blue commissions Colmar Brunton to survey 3,000 Australian consumers across a range of categories to measure and track customer satisfaction. The outcomes reported are the results from customers within the survey group who have made a purchase from a supermarket in the past month – in this case, 2,925 Australians were surveyed.