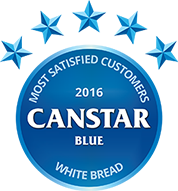 Most Australians eat bread – whether it’s for breakfast, lunch, a snack, dinner or even dessert. Everyone has their favourite type, but our research shows that white bread is purchased more than any other, followed by multigrain and then wholemeal. Take a walk around a supermarket and you’ll see several different brands all fighting to catch your attention. So when it comes to white bread, which is rated highest by consumers? Our survey of 3,000 adults found that 1,005 have bought and eaten white bread in the last three months, with eight different brands going head-to-head in the rating. But only one, ALDI Bakers Life, achieved a five-star rating for overall customer satisfaction.

White bread is generally – but not always – the cheapest of the three main bread types found in supermarkets. And it seems that consumers who buy white bread over wholemeal or multigrain are most price-conscious, with 78% of survey respondents saying they look at the price of white bread before purchasing, compared to 72% for both those who buy wholemeal and multigrain bread. The quality of white bread can obviously vary between brands, but if it’s simply cheap and cheerful you want, you could buy a 650g white loaf for less than $1 in most supermarkets. Or you could splash out as much as $3.50 for the fancy stuff. The choice is yours.

Canstar Blue commissioned Colmar Brunton to survey 3,000 Australian consumers across a range of categories to measure and track customer satisfaction. The outcomes reported are the results from customers within the survey group who have purchased either white bread from a supermarket or grocer in the last three months – in this case, 1,005 people.