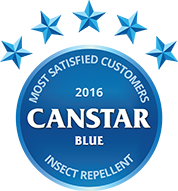 Seven different brands featured in our ratings, but only one received a five-star score in terms of effectiveness – Bushman.

Nothing can ruin a day out, camping trip or evening on the patio like pesky mosquitoes taking chunks out of your arms and legs. But why should those little blood-sucking scumbags spoil all your outdoor fun? Fortunately, a good personal insect repellent will keep the parasites at bay, so you can enjoy yourself without fear of being bitten to death.

So, are all insect repellents the same, or do some work better than others? To find out, we surveyed 3,000 Australian adults across the country and asked them about the products they have most recently bought and used. Seven different brands featured in our ratings, but only one received a five-star score in terms of effectiveness – Bushman. It also earned top marks for low skin irritation, another important aspect of using insect repellent because there’s no point keeping the bugs from biting if you spend the whole day itching yourself.

And it seems most Aussies have had to shop around to find an insect repellent that works best for them, with 76% of survey respondents trying more than one brand. In fact there are lots of things to consider when buying insect repellent, including its smell and the cost. Only OFF! got a five-star rating with regards to smell, while ALDI Repellex was the only brand to get five stars in terms of value for money.

The word ‘mosquito’ is Spanish for ‘little fly’, although those who are regularly bitten by them could probably think of other names! There are thousands of different species which feed on the blood of various kinds of hosts, mostly mammals (unfortunately), birds, reptiles and amphibians. Though the loss of a drop or two of blood will be of little significance to the victim, the saliva of mosquitoes often causes an irritating rash. If you’ve been outside, particularly at night, and suddenly find yourself scratching a part of your body, you’ve probably just been a tasty meal to some little bugger. More seriously though, some species of mosquitoes carry and spread diseases, the worst of which include malaria, yellow fever and the Zika Virus which is now sadly making headlines around the world given a recent outbreak in South America, amongst other places. The Zika Virus is particularly nasty given its links to birth defects when pregnant women are infected.

According to the Department of Medical Entomology, diseases transmitted by mosquitoes in Australia include Dengue Fever, Ross River virus disease, Australian encephalitis and Barmah Forest virus disease. Malaria in Australia has been endemic, but was declared eradicated in 1981.

Some people seem to suffer with mosquito bites more than others. If you’ve ever been left flapping your arms around madly, while others seem unaffected, you’ll want some pretty good answers from this apparent injustice. Are some people just unlucky, or is there something about us that attracts the little blood-suckers? What makes you a ‘mosquito magnet’ and what can you do about it?

Sure, mosquitoes love human blood, particularly the female ones because they use it to develop fertile eggs (that’s nice), but it seems they can quite fussy. Although research have yet to pinpoint what mosquitoes consider an ideal lunch, studies have shown that about one in ten people are more vulnerable than others. It’s thought that genetics account for a significant amount of our susceptibility to mosquito bites and people with high concentrations of naturally-occurring chemicals on their skin surface also appear a tasty treat. Generally, carbon dioxide and heat will draw mosquitoes to a crowd, but these other factors may draw them to one particularly unfortunate individual.

So how can you repel mosquitoes? Well, lots of natural remedies are purported to help, but if you don’t have any luck with the garlic and rosemary, you can always try off-the-shelf mosquito repellents like the ones included in our ratings. The most common active ingredient in insect repellent is DEET – a yellow oil which insects are said to seriously dislike the smell of, which is good news for us. Concerns have been raised about the health effects of using DEET on the skin. Our highest rated brand, Bushman, says: “DEET is considered to be the best repellent, but there are lots of myths and misconceptions about it.”

Canstar Blue commissioned Colmar Brunton to survey 3,000 Australian consumers across a range of categories to measure and track customer satisfaction. The outcomes reported are the results from customers within the survey group who have purchased and used personal insect repellent in the last 12 months – in this case, 1,372 people.