Your skin is your largest bodily organ, & you need to take care of it. Sunscreen is a great defense against the sun, but how to get the most from it? 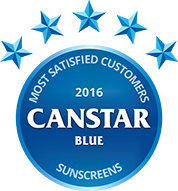 Winners: Ombra, Hamilton
A few different brands have topped our ratings in the past, and two of them have returned to the top of the standings in 2016 – ALDI Ombra and Hamilton. ALDI was a previous winner in 2014, while Hamilton topped the table in 2011.

Australia is the envy of most countries because of our beautiful climate and outdoors lifestyle. But being lucky comes at a cost – to our health. Spending lots of time in the garden, at the park or on the beach may give us some awesome memories, but it also leaves us needing to watch our backs – literally.

Australia has one of the highest rates of skin cancer in the world. And if you think it won’t happen to you, think again. According to the Cancer Council, about two in three Aussies will be diagnosed with some form of skin cancer before the age of 70. That’s a sobering thought. And if it’s not the motivation you need to take sun safety seriously, then we don’t know what is!

Reducing your chances of getting skin cancer is not rocket science – you need good sunscreen, a hat, and a bit of common sense that tells you staying out of the sun between the hours of 10am and 2pm is generally a good idea. Now, we can’t make you stay indoors, and we can’t give you fashion advice, but we can tell you what the highest rated sunscreens in Australia are.

Each summer, we survey 3,000 adults to find out which brands of sunscreen are impressing most in regards to all those factors you consider when buying it – scent, value for money, texture, ease of absorption and, of course, effectiveness. A few different brands have topped our ratings in the past, and two of them have returned to the top of the standings in 2016 – ALDI Ombra and Hamilton. ALDI was a previous winner in 2014, while Hamilton topped the table in 2011. This year, they both scored five-star reviews for overall satisfaction from Aussie consumers, and along with the Cancer Council, they also scored top marks for effectiveness.

Why sun protection is important

We really can’t stress the importance of sun safety enough. While anyone can develop skin cancer – even people in cold countries – the main cause is exposure to ultraviolet (UV) radiation produced by the sun. This radiation is also caused by tanning machines. In fact, the Cancer Council reports that people who use a sunbed before the age of 35 are 60% more likely to get skin cancer. Getting sunburnt is the result of UV radiation – so think about that the next time you fall asleep at the beach! It can also lead to the early ageing of the skin, so you might look good now, but just wait a couple of decades.

However, research also indicates that it’s not just the overall amount of UV radiation that determines the risk of developing skin cancer, but also the pattern of exposure. People who work indoors and have infrequent but intense periods of exposure – especially if they get sunburnt – may even be at higher risk of melanoma (the most deadly form of skin cancer) than someone who works outdoors but avoids being sunburnt. Sunburn in childhood is also a significant risk factor for developing melanoma as an adult.

Cumulative or long-term exposure over a lifetime also plays a part. While skin cancer usually appears in older adults, damage to the skin begins at an early age. Research suggests that while the damage to the skin cells that can lead to melanoma and other skin cancers occurs in childhood, it may be sun exposure in adulthood that triggers cells to turn cancerous. You may be at higher risk of skin cancer if you:

It’s a good idea to have your skin regularly checked for signs of skin cancer. Like most cancers, early detection is crucial. The sooner it is identified and treated, the better your chance of avoiding surgery or, in the case of a serious melanoma or other skin cancer, potential disfigurement or even death. Get to know your skin and what is ‘normal’ for you, so you’ll notice any changes. Skin cancers rarely hurt and are more likely seen than felt. Make sure you check your entire body as skin cancers can sometimes occur in parts of the body not exposed to the sun.

Staying safe in the sun

The slip, slop, slap message is not a new one but unfortunately, a large number of Aussies are just not getting it. Two-thirds (66%) of adults wish they had been better protected from the sun when they were younger, and the older you get, the more likely you are to regret this, our research found. But despite wishing they had been more sensible in the sun, many Aussies are still making the same mistakes – 49% of adults often spend time in the sun without a hat or sunscreen on, while 29% often get sunburnt.

The good news is that you can spend time in the sun without putting yourself at greater risk – you just need to understand UV radiation and act accordingly. The UV Index is a tool used to show the intensity of the sun’s UV radiation, divided into five levels of severity – low (1-2), moderate (3-5), high (6-7), very high (8-10) and extreme (11 and above). When the UV forecast is at 3 or above, UV rays are strong enough to damage the skin and sun protection is required. The sun’s rays are at their strongest between 10am and 2pm, but in some parts of Australia, the UV Index rarely drops below 3, meaning you ALWAYS need to protect yourself.

For some older Aussies, the clear sun safety advice of today will have come too late. But young people are equipped with all the knowledge and warnings you could possibly need, including the aforementioned terrifying statistic (two in three adults get skin cancer), and the one about 750,000 people being diagnosed with Basal Cell Carcinoma or Squamous Cell Carcinoma – the two most common types of skin cancer – each year.

When it comes to the youngest Aussies, the responsibility of promoting and practicing sun safety falls to the parents. But sadly, not all parents are as responsible as they could be, with about one in three (32%) of parents in our survey admitting their child often spends time in the sun without a hat or sunscreen on.

Sun safety can easily play second fiddle to fun on a glorious summer’s day. But as the research shows, those regrets of the past can come back to haunt you – so play it safe and get that sunscreen on.

Canstar Blue commissioned Colmar Brunton to survey 3,000 Australian consumers across a range of categories to measure and track customer satisfaction. The outcomes reported are the results from customers within the survey group who have purchased and used sunscreen in the last 12 months – in this case, 1,597 people.