The only thing wrong with summer in Australia is all the bugs! Compare insect sprays and see which is deemed the most effective. 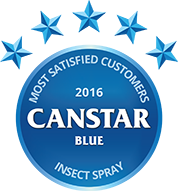 ALDI takes out the award for taking out the bugs

If you’ve ever experienced the fright of finding a big spider on the bathroom floor in the middle of the night, or cockroaches running around the kitchen first thing in the morning, then you’ll appreciate an effective can of insect spray!

Any insecticide should be able to knock over your average arachnid if you spray it enough, so the effectiveness of these products is really measured in how much you need to use to kill off those eight-legged freakshows. Because the only thing worse than finding a spider all up in your personal space is stinking your house out with nasty chemicals as you chase it around.

So which insect spray do Aussies rate highest for getting the job done with minimum effort – and at the least expense (because some can be expensive)? To find out, we surveyed 3,000 adults across the country to get their thoughts on the brand they most recently purchased and used. All the big names in pest control featured in the results, but only ALDI Atlas (yes, the bug spray you find in ALDI supermarkets) scored a five-star rating for effectiveness, value for money and overall insect-zapping satisfaction. Along with Pea Beu, it was also rated highest in terms of smell.

How much does insect spray cost?

You’re unlikely to care much about the cost of insect spray when you catch sight of a Huntsman lurking under your TV cabinet – you’ll pay anyone anything to get rid of it! But price is certainly a consideration when you buy insect spray. So how much does insect sprays generally cost?

These prices were correct at time of publishing and it’s worth noting that some brands have several different products, with prices varying.

Are the most expensive insect sprays the most effective? Well, you can make your own mind up. But our survey found that 77% of Aussies have tried more than one brand of insect spray in an effort to find one that works well.

You only need to read the instructions on cans of insect spray to realise that these products generally contain some pretty unpleasant ingredients – the likes of which you don’t want to inhale if you can help it. After all, they do kill living things! A significant 63% of survey respondents said they are concerned about using insect sprays because of the chemicals in them. So what actually are the active ingredients in insecticides?

Various types of pyrethroids are common in off-the-shelf insect sprays. They are a synthetic version of the naturally-occurring pyrethrins produced by Chrysanthemums and coccineums. They work by hyper-activating nerve cells of insects, leading to paralysis and death. Because pyrethroids are metabolized quickly, there is little risk to human health in small quantities. According to the US Environmental Protection Agency (EPA), pyrethroids are also toxic for fish and amphibians, bees and dragonflies, and invertebrates. Cats can also be sensitive to pyrethroids, so be careful where you spray!

Indeed, you should keep your insect spray out of the reach of children, as well as in a cool place, away from heat sources like heaters, stoves or open flames, given that cans are pressurized dispensers. And it’s probably best not to keep a can in your car because of how hot they can get, especially in summer. Also keep away from source of ignition and naked flames. It is an aerosol after all!

Common pyrethroids listed on the active ingredients list of household insecticides include:

The other main ingredient of some insecticides is Piperonyl Butoxide, which by itself isn’t toxic to insects, but which can enhance the toxicity of the pyrethroids. In basic terms, it helps the toxic agent stick to the insect until it has had time to work.

Canstar Blue commissioned Colmar Brunton to survey 3,000 Australian consumers across a range of categories to measure and track customer satisfaction. The outcomes reported are the results from customers within the survey group who have purchased and used insect spray in the last 12 months – in this case, 1,987 people.