Is your business up to speed with the fastest internet connection? It is getting the best possible customer service? Compare broadband providers with our satisfaction ratings.

Show Important Notes^* Hide Important Notes^*
* Overall satisfaction is an individual rating and not a combined total of all ratings. Brands with equal overall satisfaction ratings are listed in alphabetical order.
^ By clicking on a brand or ‘details’ button, you will leave Canstar Blue and be taken to our referral partner to compare. You agree that Canstar Blue’s terms and conditions apply to this referral. If you click on a brand that our referral partner does not cover, you will be taken to a brand page on Canstar Blue.
Canstar Blue research finalised in April 2016, published in June 2016. 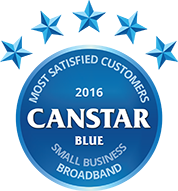 iiNet was the only provider in 2016 to receive the maximum five star scores for network performance and customer service. In fact, iiNet achieved top marks across the board for the third year in a row, reciving 5 stars for overall customer satisfaction.

A slow internet connection is frustrating at the best of times, but for a small business trying to turn a profit, it can prove costly. In a world where time is money and a business is only as good as it communications, a quick and reliable broadband service is an absolute must. The problem is, not all small businesses are getting what they need. That’s why Canstar Blue annually surveys hundreds of business owners and key decisions-makers across the country to determine which internet service providers (ISPs) are delivering the goods – and super-fast broadband speeds.

For small businesses, network performance (i.e. speed and reliability) and customer service (i.e. technical support when it’s needed) are of the utmost importance, our research shows. Getting value for money from your broadband plan takes a backseat when you quickly need to send out a contract or an invoice, or pay a bill or transfer money. So, which ISPs do Australian businesses rate highest on these crucial factors?

Our ratings have compared four broadband giants, but only iiNet received the maximum five star scores in terms of network performance and customer service. In fact, the telco achieved top marks across the board, while TPG (iiNet’s parent company) also earned five stars on value for money. This result reflects our latest customer ratings for residential broadband use, with TPG-owned brands dominating on ADSL/Cable, NBN and bundled communication plans. It is also the third year in a row that iiNet has topped our ratings for small business broadband providers.

There are three main types of fixed line internet connection – ADSL, Cable, NBN – which will instantly have an impact on the speed and quality of your broadband network. It’s likely that the majority of small Australian businesses have an ADSL connection which tends to be the cheapest, but usually slowest option. Cable and NBN connections will provide faster uploads and downloads, but at a greater cost. However, it seems that most business owners and key decision-makers would be happy to pay extra for a more reliable service, with 78% admitting that fast broadband is crucial to their company’s success. That will explain why there is great enthusiasm for the rollout of the NBN, with 64% of respondents hopeful that it could make a big difference to their business. Only iiNet – one of the leading providers of NBN services – received a five star rating for network performance, while TPG and Optus scored four, and Telstra three.

While large companies are likely to have their own IT departments and plenty of experts to call on when they’re experiencing internet problems, it’s unlikely that small businesses will have the same resources at their disposal. That’s why customer service and support can be so important, and iiNet has earned an unrivalled reputation for great customer service over the years. It was the only ISP to score five stars, while TPG and Optus got four stars, and Telstra three.

Our survey found that small businesses are spending an average of $141 per month on their broadband connections. Whether that presents good value for money or not is down to the individual company and the level of their service. However, 43% of respondents reported their connection as being slow or unreliable, while 62% believe they could probably get a better deal if they shopped around. TPG and iiNet both scored five stars on value for money, while Optus received four stars and Telstra three.

In the fast-moving world of small business, it’s important that information is presented clearly and accurately. No one should pay a bill without first reviewing it, so business owners and key decision-makers will want a broadband provider that makes the process as easy and stress free as possible. For bill clarity, iiNet was rated five stars, TPG and Optus four, and Telstra three.

Our survey found that 77% of small businesses have been with their existing broadband provider for five years or more. We’d like to think this is because they are getting a great service and don’t feel the need to leave, but for many it’s likely to be the case that they simply aren’t shopping around for a better deal. This process starts with understanding the conditions of your current contract, so you’ll want it to be clear and easily reviewed. For contract clarity, iiNet once again rated five stars, TPG and Optus four, and Telstra three.

No business (or household for that matter) should settle for sub-standard broadband speeds, and uncertainly shouldn’t accept poor customer service. So, if you’re thoroughly fed-up with your ISP, we hope these ratings prove helpful. Getting the best deal on your internet will take a bit of work, but if you don’t put the effort in, you won’t get the rewards.

Canstar Blue commissioned Colmar Brunton to survey 845 Australian small business owners or main decision maker for the business, across a range of categories to measure and track customer satisfaction. The outcomes reported are the results from customers within the survey group who have an active broadband account for their business and the business pays the bills – in this case, 668 small business owners/decision makers.