You are viewing the archives 2016 ratings for mobile plans. Go to the current plan ratings.

Show Important Notes^* Hide Important Notes^*
* Overall satisfaction is an individual rating and not a combined total of all ratings. Brands with equal overall satisfaction ratings are listed in alphabetical order.
^ By clicking on a brand or ‘details’ button, you will leave Canstar Blue and be taken to our referral partner to compare. You agree that Canstar Blue’s terms and conditions apply to this referral. If you click on a brand that our referral partner does not cover, you will be taken to a brand page on Canstar Blue.
Canstar Blue research finalised in June 2016 published in July 2016. 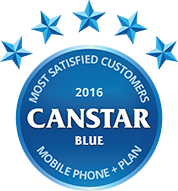 Virgin Mobile has been rated five stars by customers for its mobile phone plans including a new handset, leading the way from Optus, Telstra and Vodafone.

Every year, Samsung and Apple release their latest smartphones, much to the delight of many Australians, for whom a contracted handset phone plan will be their means to get hold of their favourite new device. These plans mean signing up with your chosen provider for two years, in order for you to pay off the cost of your new handset, in addition to your selected plan, with a set amount of call time, texts, data and any other features that may apply. But which provider keeps its customers happiest over the long-term? If you’re going to spend (at least) 24 months with a mobile phone carrier, you’ll want to know they offer you a great deal, but also top-notch service if and when you need them.

This is why, in addition to producing customer ratings for both prepaid and SIM-only post-paid service providers, Canstar Blue think it’s important to find out which telco Aussie mobile users are most satisfied with. Signing a two-year contract to get one of the latest Samsung Galaxy or iPhone smartphones means you’ll be splashing out a tidy four-figure some over the duration of your deal. This is a huge financial commitment and you deserve great value for your money. So which provider offers the best overall package? To find out, we canvased the opinions of more than 1,200 adults with a mobile plan, including a handset. The big four telcos all featured in the ratings, but only Virgin Mobile received a five-star review for overall satisfaction, leading Optus and Telstra who both rated four stars, while Vodafone earned just three stars.

Now, let’s dig deeper into the world of contracted phone plans to find out specifically what the four providers featured in these results offer, and what you need to know to make sure you’re getting the best deal possible.

Handset phone plans: It’s all about the features

At a time when the SIM-only (bring your own phone) mobile market is hugely competitive, with more than 30 different carriers fighting for your business, the big providers need to offer some amazing deals to encourage consumers to sign up for two years – and fortunately that’s exactly what they are doing! Talk is cheap these days – literally – so it’s all about who can offer the best plan features to accompany your shiny new handset.

Unlimited talk and texts is basically the minimum requirement now for any phone plan over $25 per month – the carriers need to do a bit more to impress. If you’re comparing contracted plans from Virgin Mobile, Optus, Telstra and Vodafone, these are some of the features you’re likely to find:

This is becoming another fairly standard feature of handset phone plans, with the big providers allowing you to stream as much music as you please from selected services, without eating into your monthly data allowance.

The way people watch their favourite TV shows and movies has changed since the arrival of subscription video on demand services, such as Netflix and Stan. A few years ago, being able to record shows on Foxtel and watch them at your convenience was incredible, but now all major TV networks have their own online catch-up services, and consumers are used to being able to watch TV shows and movies on their mobiles, on the go. The mobile providers have responded to this by introducing TV subscription services to their plans, with some even bringing data-free sports streaming.

Unlimited local talk and text has become the norm, but many service providers also now offer unlimited international calls to selected countries. Some SIM-only mobile providers have great international call packages, but few can match the features offered by the big carriers.

Other features to consider

Phone plans with 20GB of data or more are now common, so it makes sense that many mobile users will go through months when they don’t use all of their allowance. As such, data rollover is now a very popular feature of many plans, but some carriers are more generous with it than others. The same can be said when it comes to international roaming, so be sure to check out the small print of your contract if these factors are likely to be relevant to you.

How much do phone plans cost?

The cost of your phone plan will depend on three factors:

To give you an idea of how costs can vary depending on your service provider, let’s look at a comparison of plans for the new iPhone 7 (32GB). Let’s say we want unlimited talk and texts, with 5GB of data. If we can get more data, that’s a bonus.

Virgin Mobile comes out cheapest in order to meet our demands for 5GB of data per month, plus unlimited talk and texts. However, it should be noted that the other carriers bring more data and that the features of these plans – as mentioned above – can vary considerably. Let’s now see how things shape up if we want 10GB of data per month or more:

This time there is little difference between Virgin Mobile and Vodafone, with Optus and Telstra more expensive owing to their increased data inclusions.

How to get the best deal?

In order to get the best deal on a new phone plan, it’s important to remember that ‘best’ does not always mean cheapest. As we’ve found, costs can vary significantly between providers and depending on the features you choose. Try to find the provider and plan which best meets your specific needs, and treat bonus features – such as data-free music or content streaming – as a bonus.

The good news is that you have plenty of options to choose from, so don’t just sign up with the first provider you come across just to get your hands on a new phone. Remember, you’ll likely be signing a two-year agreement, so make sure you’re locking in a great deal with exactly what you are looking for.

Canstar Blue commissions Colmar Brunton to survey 3,000 Australian consumers across a range of categories to measure and track customer satisfaction. The outcomes reported are the results from customers within the survey group who have an active post-paid mobile phone account with a handset included in their name for which they pay the bills – in this case, 1,233 Australians.