You are viewing the archived 2016 ratings for mobile plans. Go to the current plan ratings.

Postpaid phone plans can provide great flexibility and amazing value for money. If you want to go SIM-only, compare service providers with our customer ratings.

Show Important Notes^* Hide Important Notes^*
* Overall satisfaction is an individual rating and not a combined total of all ratings. Brands with equal overall satisfaction ratings are listed in alphabetical order.
^ By clicking on a brand or ‘details’ button, you will leave Canstar Blue and be taken to our referral partner to compare. You agree that Canstar Blue’s terms and conditions apply to this referral. If you click on a brand that our referral partner does not cover, you will be taken to a brand page on Canstar Blue.
Canstar Blue research finalised in June 2016 published in July 2016. 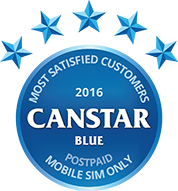 Amaysim has been a consistent top-performer in our customer reviews and has achieved five stars in our inaugural ratings for postpaid SIM-only carriers, leading the way from Telstra, Optus, Vodafone and others.

There has never been a better time to be a mobile phone user – and postpaid SIM-only plans are the key battleground for the telcos trying to attract your business. The mobile market has become incredibly competitive, meaning consumers are in the driving seat when it comes to finding the best value deals around. To purchase a postpaid SIM-only plan, you’ll need to own a handset outright, not be locked into a two-year contract that includes paying off your phone over time, which remains the preferred method of getting connected for many Aussies.

Owning your own handset means you have the flexibility to choose a great SIM-only plan and switch between service providers with relative ease, whether you go prepaid or postpaid. The former option means you’ll only pay for what you use, and once you run out of credit, you can no longer make any calls, send text messages, or use mobile data. This will be an issue for some people, which could mean a good postpaid plan is the best solution. However, there are pros and cons to both types of plans.

So which providers are deemed to offer the best postpaid SIM-only value? To find out, we surveyed hundreds of Aussies and got their feedback on their mobile carriers, with the star ratings above reflecting their reviews. Eight major providers featured in the ratings, but only Amaysim received top marks for overall customer satisfaction, in addition to value for money.

Amaysim has been a consistently strong performer in our reviews over the years, and the orange telco is still impressing its growing army of postpaid customers in particular, even though its recent move from 30-day to 28-day plan expiry didn’t go down well with all customers. Nevertheless, this result is a strong endorsement of Amaysim, beating off intense competition from iiNet, Optus, Virgin Mobile, Telstra, TPG, Vaya and Vodafone.

We hope these ratings are a helpful guide if you’re considering a postpaid SIM-only plan, or if you’re contemplating a switch between providers. While eight of the most popular appear in these ratings, it’s important to remember there are many other low-cost carriers out there which also provide some great-value plans. They include:

In fact, there are more than 30 different mobile providers in Australia, some of which you may never have heard of. We’ll take a closer look at how you can find the best value postpaid plans shortly, but for now let’s cover off some postpaid basics so you can be sure it’s the best option for you.

What is a postpaid phone plan?

A postpaid phone plan is an ongoing plan that involves paying for your mobile service at the end of each month, in addition to any other costs you have accrued for exceeding your plan’s call, text and data inclusions. Postpaid plans come in three different varieties:

Postpaid plans which include a handset will likely be the most expensive as you will also be paying to buy your new phone, on top of your chosen plan. Postpaid plans over 12 or 24 months generally offer improved value compared to monthly alternatives as reward for your loyalty to the service provider in question. Our customer ratings include both types of SIM-only postpaid plans. Virgin Mobile was rated highest in our review of handset postpaid plans.

Why choose a postpaid SIM-only plan?

The main advantage of postpaid plans over prepaid plans is the convenience of being able to make extra calls, send texts or use data outside of your plan’s limitations, should you need it. You also avoid having to recharge your plan every month, as is the case with prepaid. Postpaid plans – even the no-contract ones – simply continue every month unless you contact your provider to cancel the plan.

However, postpaid plans are not perfect – being able to exceed your selected allowances means you will be charged extra for what you have used. Excess data charges are often the cause of bill shock for customers who lose track of their usage, although the telcos are improving the way they go about charging you – with most implementing a standard $10 fee per GB. That said, it’s worth familiarising yourself with all the charges you could face, should you go over your plan’s limits.

How to find the best postpaid SIM-only deal?

To get the best postpaid SIM-only plan, it pays to know how much data you’re likely to need each billing period – that way you’ll avoid any excess data charges which could throw your monthly budget into disarray. The majority of SIM-only plans now include unlimited talk and text as standard, which makes comparing plans easy – just look for the best data-versus-cost deal.

As we mentioned earlier, the mobile space is now extremely competitive, which means that if you haven’t switched plans in the last couple of years, you will almost certainly find a better deal now. To give you an idea of the value on offer, let’s look at the cheapest no contract postpaid SIM-only plans available if you want unlimited talk and text, plus a hefty 5GB of data.

So, you could get as much as 8GB of data, plus unlimited talk and text, for under $40 per month. Think about how much you are currently paying and you can decide if that’s a good deal or not!

The majority of providers offer no contract postpaid SIM-only plans, but some also offer plans over 12 or 24 months. As we mentioned, these usually increase the value proposition, and it’s where the big telco – Telstra, Optus and Vodafone – tend to bring their best deals out to play. Here are the latest, cheapest contract plans for unlimited talk and text, plus 5GB of data:
As you can see, you’ll now get as much as 10GB of data each billing period for about $40. That’s incredibly good value if you’re willing to commit to a contract for a year or more.

Whichever way you go, you’re sure to find a postpaid plan that suits you and your personal needs.

Canstar Blue commissions Colmar Brunton to survey 3,000 Australian consumers across a range of categories to measure and track customer satisfaction. The outcomes reported are the results from customers within the survey group who have an active post-paid mobile phone account in their name for which they pay the bills – in this case, 577 Australians.

Please note: the past ratings listed are for Mobile Phone Plans – with or without a handset.