Looking for a better home for your money? Compare Australia’s challenger banks with our customer satisfaction ratings. You can also visit the CANSTAR website to compare banking products. 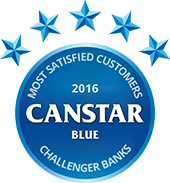 Having also top-scored back in 2012, Heritage joins ING in an exclusive double-up club, having earned a five star rating for overall customer satisfaction this year, in addition to digital banking and interest rates.

Bigger isn’t always better. Sure, there are advantages to being a customer of one of Australia’s big four banks, but you may feel that you’re just another number in the system. No bank is perfect, but with a smaller bank often comes more personalised service. You might even find better value financial products, too.

Every year, Canstar Blue runs the rule over our biggest financial institutions to see which are keeping their customers the most satisfied. And we do likewise when it comes to challenger banks, with five different institutions topping our ratings since 2010. However, this year we have only our second repeat winner – Heritage Bank. Having also top-scored back in 2012, Heritage joins ING in an exclusive double-up club, having earned a five star rating for overall customer satisfaction this year, in addition to digital banking and interest rates.

Why choose a challenger bank?

There are several reasons why you might choose to trust your money with a smaller bank, as opposed to one of the big four (ANZ, Commonwealth Bank, NAB, Westpac). You might have a particular allegiance to a state-based institution, or you may have been won over by a lender’s genuine community involvement. Whatever the case, our research shows that customer service is the number one driver of overall satisfaction for challenger bank customers. Compare this to our latest review of the big banks where customers are less concerned about great service and more worried about how problems are dealt with.

Looking at our results table, it seems Australia’s challenger banks were made to work hard for their five stars reviews this year, so let’s take a look at each ratings category and who achieved what:

Professional customer service is important in any industry, but it seems particularly important when it comes to money. As we know, quality customer service is of the utmost important to those who trust challenger banks with their cash. Anyone who has ever stood in a long queue at a branch, or been held waiting on the phone for ages when they have a concern, would attest to that. In these ratings, Bank of Queensland and Teachers Mutual Bank both achieved five star ratings, while seven others were given four stars.

The number one driver of satisfaction for major bank customers, efficient inquiry and problem handling is also hugely important for those with the challenger banks. When it comes to your finances, it’s natural to take any issues that occur seriously, and you would expect your bank to do likewise. In this area, Teachers Mutual Bank earned a five star score, while six others rated four stars.

A major bugbear of banking customers the world over, fees and charges come with the territory if you don’t follow the terms and conditions set out by your financial institution. What you should expect, however, is that your bank is clear and detailed about the charges you may incur, and that they are a reasonable amount. ING and UBank both achieved five star reviews in this area, while six other challenger banks got four stars.

Few would argue that digital banking is not the way of the future, so customers are right to have high expectations when it comes to the services provided by their institution. It’s not just about being able to pay bills online anymore, banks are almost expected to provide a plethora of helpful digitals tools and apps to help us better manage and distribute our cash. In this hotly contested area, Heritage Bank and Teachers Mutual Bank both received five star reports, while the majority of other managed four stars.

The interest rates provided by the banks on their financial products won’t be relevant to all customers, but with our research showing that six out of ten challenger bank customers are more likely to apply for things like credit cards or personal loans with their everyday banking institution, they can be very important. Heritage Bank and Teachers Mutual Bank were both deemed worth of five stars for their digital offerings, while the majority of the rest got four.

Canstar Blue commissioned Colmar Brunton to survey 6,000 Australian consumers across a range of categories to measure and track customer satisfaction. The outcomes reported are the results from customers within the survey group who have one or more financial accounts or products with a bank other than the big four (ANZ, Commonwealth Bank, NAB, Westpac) – in this case, 1,898 people.