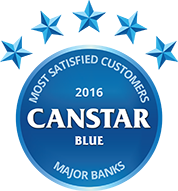 NAB has now topped our ratings for four of the last five years – that’s quite an endorsement from NAB customers. In 2016, NAB has also secured five-star reviews for its product range, customer service, enquiry & problem handling, and fees & charges.

Where would we be without our banks? Seriously, we can’t just stuff our cash in pillows and be down with it. We need a bank that we can trust with our money, one that makes the processes of accessing and managing it as convenient as possible, and one that strives to deliver the best possible customer service. Australia’s big four banks usually bear the brunt of criticism when it comes to the financial services industry, and that’s not completely unfounded. But the truth is – to have a strong economy – you need big, strong banks, and we shouldn’t be completely appalled whenever they announce a big profit.

To most Australians, our only interaction with our banks will be when we pop into a branch to deposit some cash or have a question to ask, or when we log-on to our internet banking to pay our bills or transfer money. So to find out which major bank is getting these services right, we surveyed more than 1,700 Australian adults who currently have an active everyday transaction account or other financial product with ANZ, Commonwealth Bank, NAB or Westpac. We think it’s important to keep the big banks on their toes, and these ratings reflect the opinions of their customers.

In recent years, these customer reviews have followed a similar path, with the National Australia Bank (NAB) earning a five-star rating for overall baking satisfaction. In fact, NAB has now topped our ratings for four of the last five years – that’s quite an endorsement from NAB customers. In 2016, NAB has also secured five-star reviews for its product range, customer service, enquiry & problem handling, and fees & charges – a particularly impressive outcome given how most of us would react to the thought of our bank taking money off us. NAB also achieved four stars for its digital banking offerings and three stars on interest rates.

For some people, their bank will simply be a home for their money, but for others it will also be the institution through which they have other financial products, such as car loans, credit cards, savings accounts, insurance or home loans. It is certainly convenient to take out other products with the financial institution you do your everyday banking with, but it might not necessarily be a good idea. It’s important to shop around for the most favourable terms and interest rates no matter which bank you’re with. And it seems this message is finally getting across, as more and more Australians are doing their homework. In 2015, our survey found that about eight out of ten (79%) big bank customers were more likely to take out financial products, such as loans or credit cards, with the institutions they bank with. However, in 2016 that number has dropped significant to just 59% of big bank customers. Of course, this is not to say that the major banks won’t have the best financial products – just that it’s important to shop around and make sure. Follow these links to review a range of financial products from ANZ, Commonwealth Bank, NAB, Westpac and dozens more institutions.

Unfortunately, money remains a point of stress for some households, either because they don’t have enough of it, or don’t manage what they have effectively. Our survey found that just over half (55%) of Australian adults are comfortable with their current financial position. Those aged in their 30s (50%) were least likely to declare themselves as financially comfortable, while those aged 70 and above (61%) were most likely. And men (60%) were much more likely than women (51%) to say they are happy with their current position.

In a world of online banking, it’s never been easier for people to closely monitor and manage their money. The big four banks are leading the way in online innovation, with a plethora of new banking tools and apps hitting the market every year. In 2014, Westpac was the recipient of a Canstar Innovation Excellence Award for its Pay Pig App that encourages young people to save their pocket money, while Commonwealth Bank earned three awards in 2015, including one for Cardless Cash – a system that allows customers to withdraw cash from an ATM when they don’t have their bank card with them.

However, it seems Australians want more from their big banks than just the latest online and digital developments, with our survey revealing the key drivers of customer satisfaction.

The message? It takes more than just a few flashy tools and apps to keep big bank customers happy. We want real substance, we want to be listened to, we want good service, and we don’t want to be ripped off over fees and charges. That shouldn’t be too much to ask, should it?

Canstar Blue commissioned Colmar Brunton to survey 3,000 Australian consumers across a range of categories to measure and track customer satisfaction. The outcomes reported are the results from customers within the survey group who have one or more financial accounts or products with one of Australia’s big four banks – in this case, 1,729 people.