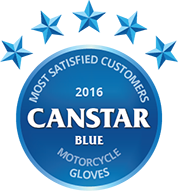 Our 2016 customer satisfaction award winner is the popular Alpinestars. The brand has a tight grip on the prize with an impressive set of results.

Riders have a range of different reasons for hopping in the saddle, but a lot of us simply can’t help but feel like James Dean in Rebel Without a Cause for a little bit every time we take the bike out. However, it’s no use feeling like Jimmy D if you can’t even feel your hands after a ride. 44 per cent of our survey respondents said they bought a pair of gloves based on how they look, but there is a lot more to gloves than looking good.

Comfortable, protective gloves are far more important for your mitts than looks alone. Looking awesome is just a bonus, but protection and fit are more important aspects when determining what motorcycle gloves are right for you. To get an idea of how Aussies buy motorcycle gloves, we surveyed hundreds of riders across the country about their purchases. A noteworthy thing we found was that 15 per cent of respondents said they would always try to buy the cheapest gloves. When the average amount spent on gloves by those surveyed came to $89.14, you can see why a good portion of people are trying to bag a bargain.

As we’ve established, motorcycle gloves should be more about function over form. This year, in our customer satisfaction ratings for gloves, Alpinestars took out the award with five stars for overall gloves satisfaction. They also were dominant in most aspects against the competition, which makes Alpinestars a viable choice the next time you buy gloves.

No one likes to spend more money than they should. But when it comes to safety – especially in a dangerous hobby such as motorcycling – spending a bit more on protective gear can literally save your skin. Purchasers of Alpinestars gloves certainly think they got value for money – the brand achieved five stars in this category. Also with five stars was Australian company Dririder, and the two brands are pretty neck-and-neck overall, but ultimately Alpinestars took out top spot,

Aussies face a range of different climates. So you could be experiencing Antarctic chills in the south of the country, then be sweating a storm up in the top end. If you’re riding a lot, it’s important to get a pair of gloves that is both breathable, yet warm and protective from the elements. In this segment, Alpinestars tied with Dririder with five stars each. In hot contention were brands Racer and Rjays with four-stars each.

Similar to comfort, if your gloves don’t fit well then they likely won’t be comfortable. Fit is not only necessary for comfort, but for protection too. In a crash, 1000 different things could go wrong – having snug fitting gloves could prevent gravel and debris from getting inside and tearing up your hands. Moreover, a snug fit helps keep the warmth in on those cold days. Dririder took out this category, being the only brand with five stars awarded. Alpinestars was in hot contention with four stars apiece, as well as AGV, Racer and Rjays achieving three stars each.

Luckily your hands don’t contain your brain, but protecting potentially the most useful part of your body is a worthwhile venture. Not only do gloves keep your hands warm, they also offer vital protection and padding should you come off your bike. Using your hands is usually the first instinct you have to break a fall, and the road is not a friendly place for your hands at any speed. The best gloves have reinforced fabric and padding on impact areas, and some brands are certainly better than others in this regard. Alpinestars was the only brand to achieve five stars for protection, and Dririder was in hot contention with four stars. Not all gloves are made equally – it’s worthwhile choosing the ones that offer the most adequate protection.

It’d be unfortunate to see your gloves torn to shreds if you come off coming out your driveway, so choosing ones proven to be durable is good practice. In this category two brands earned five stars – Alpinestars and Dririder. Close behind were brands AGV and Racer with four stars each. Of course, durability also depends on how often you ride, so look for gloves with reinforced construction around high-wear zones.

Gloves can be hell on earth for people with either really cold or hot hands. Unfortunately, that’s many of us. Gloves not only protect from the elements, but they should also protect from a variety of weather situations. From scorchers to freezing days, your gloves should be breathable yet be warm enough at the same time. It’s a tricky balance, and some of the best also have rain and water resistance. In this case, Alpinestars was the only brand to achieve five stars for functionality. AGV, Dririder and Racer all earned four stars, while RJays earned three. This proves that the competition is fierce, not only to provide a protective glove, but also to provide a comfortable and functional one.

Canstar Blue commissioned I-view to survey 1079 Australian motorcycle riders in order to measure and track customer satisfaction. The outcomes reported are the results from customers within the survey group who have purchased and used motorcycle gloves in the last 12 months – in this case, 393 Australians.