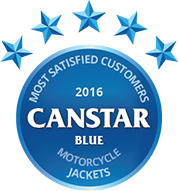 For the second year running, Dririder has taken out our customer satisfaction award for motorcycle jackets, earning an unrivalled review by Aussie bikers.

Whether you fancy yourself as a bit of a James Dean, Casey Stoner or an Elena Myers, every rider has their own reasons for hopping on the bike. Though for many it’s more about getting from A to B or the adrenaline rush of riding something so powerful. 12 per cent of our survey respondents said that the style or look of the jacket was their primary reason for buying it. A further four per cent said they wear their jacket socially and not for riding as its primary purpose. So for a brand to do well, it has to have both form and function.

A comfortable, protective jacket should also be on the top of your priority list, and Aussie brand Dririder achieved supreme results in all categories. This is the second year running these customer satisfaction ratings for motorcycle jackets and Dririder is currently two-for-two.

Our survey results revealed that Aussies spend an average of $353.54 on their motorcycle jackets. So, it makes sense to get a jacket that you believe represents good value for money. Although this is down $3 from last year, it’s still not a figure to sneeze at. Riders want great value for money, and in this category Dririder was the only brand to earn five stars. Following closely was Alpinestars with four-stars.

Nothing is worse than if your jacket makes you fidgety and uncomfortable while on the road. You want to be enjoying the road, not enduring it! 20 per cent of survey respondents said that a jacket’s comfort was the primary reason for purchase. Dririder again took out top spot in this category, with five-stars. Also at the top with five stars was Alpinestars. Following behind was Triumph with four-stars and BMW jackets with three.

Similar to comfort, how a jacket fits is also critical. Not only is a well-fitting jacket more comfortable, it’s also more protective in the event of a crash. Survey respondents thought Alpinestars jackets provided the best fit with a five-star rating. Closely following was Dririder with four-stars and Triumph and BMW with three-stars each.

The big ticket factor to choosing a jacket, protection should be at the top of every rider’s priority list. It’s just you and the bike; no airbags, no cocoon to listen to podcasts in. We riders are a naturally alert and defensive bunch, but it’s the other drivers on the road that are often unaware of their surroundings. You can just never quite know if a driver has seen or heard you; having a great protective jacket can eliminate broken bones and nasty road rash in the case you do come off.

Jackets are expensive, but you’ll be glad you spent extra on a protective jacket in the case of a crash. In having an unfortunate meeting with the road or dirt trail, you want to have peace of mind that your jacket is up to the task. In this case, Alpinestars took out top spot with five-stars; Dririder and Triumph were close behind with four-stars and BMW came in with three. 54 per cent of those surveyed said they would spend more on a motorcycle jacket in the future; undoubtedly some of those who responded are saying this out of crash experience.

If you’re spending upwards of $350 for a motorcycle jacket, you’d most definitely want it to be durable and withstand most of whatever you chuck at it. Obviously this will correspond with how often you ride, so it helps to choose a jacket with reinforcements in high-wear areas. Dririder was the only brand in our survey to achieve five-stars for durability; Alpinestars and Triumph scored four-stars, while BMW scored three.

It’s all good having a jacket that looks the part, but if it makes you a sweaty mess or a shivering wreck on the road, then it’s no good. Having a functional jacket that’s breathable – not to mention protective from the elements – is pretty much necessary to enjoy your time on the road. You’ll want to pick a jacket that’s adaptable to a bunch of different weather conditions. Padded pockets – as well as good-quality zips – are also huge bonuses here. Dririder was the only brand to achieve five-stars for functionality. Alpinestars trailed with four-stars, while Triumph and BMW brought in the rear with three.

If you’re one of the 12 per cent who favour style as the most desirable feature of a jacket, then choosing Alpinestars may be the best option for you. The brand achieved five-stars for style, while Dririder and Triumph came in closely at four-stars. Rounding off the pack was BMW with three-stars. Once you’ve nailed down a jacket for its practical properties, it’s also worthwhile choosing one that looks good.

Canstar Blue commissioned I-view to survey 1079 Australian motorcycle riders in order to measure and track customer satisfaction. The outcomes reported are the results from customers within the survey group who have purchased and used a motorcycle jacket in the last three years – in this case, 495 Australians.