Show Important Notes^* Hide Important Notes^*
* Overall satisfaction is an individual rating and not a combined total of all ratings. Brands with equal overall satisfaction ratings are listed in alphabetical order.
^ By clicking on a brand or ‘details’ button, you will leave Canstar Blue and be taken to our referral partner to compare. You agree that Canstar Blue’s terms and conditions apply to this referral. If you click on a brand that our referral partner does not cover, you will be taken to a brand page on Canstar Blue.
Canstar Blue research finalised in August 2017, published in September 2017. 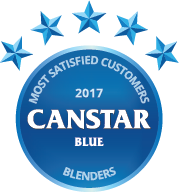 Beating out the big guys of blending, Sunbeam has emerged as the highest rated brand for blenders in Australia in 2017. Sunbeam was the recipient of five-star reviews on performance, consistency, ease of use, ease of cleaning, value for money and overall satisfaction.

Sunbeam cuts the competition to piece in blenders review

It seems everyone’s chopping, blending and smoothie-ing. Whatever happened to vegging? Oh yeah, blenders can do that, too. In a world of increasing waistlines where everyone’s trying to shed their kilos, blenders have become a mainstay on kitchen benches throughout Australia. Blenders are good for preparing protein shakes, smoothies, veggie juices, and even purees and sauces. Even the average blenders you can pick up from department store shelves these days boast outstanding power figures and usability, making chopping through fruit and vegetables at 6am an easy – if not quiet – task. If you’re desperate to join the blending craze – or just looking to upgrade an old model – you’ll want to know which blenders are really up to the chop. Well, wonder no more!

When you think of blenders, big names like NutriBullet and Nutri Ninja will inevitably spring to mind – and with good reason – but if there is one overriding message to take from this review, it’s that thinking outside the box can reap rewards, with various other brands equally up to the challenge of demolishing your favourite foods in a heartbeat. In fact, in 2017 one of these other brands has really come to the fore, scoring five-star reviews for overall customer satisfaction, as well as most other research categories. We’re talking, of course, about Sunbeam.

Nutri Ninja and NutriBullet have dominated our customer ratings for blenders since 2014, but it is now Sunbeam’s time to shine. However, it was not the only brand to rate highly in one or two specific areas:

While Sunbeam did take out top spot, it’s evident that customers still think favourably of Nutri Ninja and Nutribullet. So what are people doing and making with their blenders, and how could one fit into your busy schedule? Our research may be able to shed some light on the issue.

Some consumers scoff at the thought of a blender and will try to get all their nutritional needs through their three square meals a day. However, for those with a tight schedule, or who don’t feel like stomaching a cup full of kale, a blender is clearly a very useful ‘grab n go’ option. They also make food preparation much easier.

Aside from convenient meal preparation, many Australians said that blenders are also good for their health.

Owning a blender can also help to expand the palette, with nearly half (46%) of users reporting that they have tried new foods thanks to their new blending habits. If kale and coconut water sounded gross before, just pop those into a blender with some fruit and you have a superfood smoothie! However, what can you expect to pay for this new, healthy blending lifestyle?

How much do blenders cost?

Our survey of Australian consumers found the average amount spent on new blenders is $135. Interestingly, those aged 40-49 spent the most at just under $151. Sunbeam owners spent less than the average ($117), meaning you don’t necessarily need to dive deeply into your pockets to buy a good blender.

In any case, no matter how little you spend, it’s going to be a big waste of money if you don’t actually use your new blender! While many buy blenders with the goal of a healthier diet or a positive change in their lives, a great proportion of them end up going unused. 43% of survey respondents said they don’t use their blender as much as they thought they would, with 21% admitting it was an impulse purchase. So before spending $100+ on a blender, consider if you actually need or really want one. If you’re just buying a blender to fit in with the trend, you’ve probably bought a $100 paperweight. But if you can see yourself making smoothies, soups and juices, it should be a worthwhile investment!

What should I look for in a blender?

Blenders are about more than just a cheap price or a gimmicky feature. Aussie shoppers want performance above all else. Below are the key drivers of customer satisfaction when we get our blenders home and on the kitchen bench:

It’s evident that customers have high expectations with blenders, perhaps because of all those infomercials promising the earth! The only area in which Sunbeam did not score five stars was other functions, but if you’re just making a juice, protein shake or smoothie like the majority of people, do you really need those bells and whistles?

To help you decide which brand will be best for your blending needs, here is an overview of the eight in this year’s review. 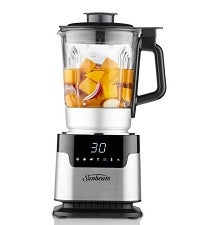 Sunbeam produces a large range of blenders for all types of blending applications, with prices ranging from about $50 to about $300. Fuelling the ‘grab n go’ blender craze, Sunbeam’s forte seems to be its ‘drink bottle blenders’, which blend your food into a bottle for quick and easy transportation. Other more traditional blenders are also available and the range is big enough that you can specialise in certain areas – soup making, ice crushing, maximum power and so on. The most expensive ‘Soup and Smoothie’ blender (pictured) boasts a 1500w motor with a 1.75L blending capacity and auto-clean function. Drink bottle blenders come with two 600ml bottles and a 300w motor – enough to chop through blueberries and other delicious smoothie foods. Sunbeam was a stellar performer in our 2017 review, with five stars for overall satisfaction and most other research categories.

It’s really no surprise to see ALDI in this review, with the discount grocery chain permeating a swathe of our ratings! While ALDI blenders are not available all the time, they do crop up from time to time as ‘Special Buys’. While not specifically ALDI-branded, ‘Ambiano’ blenders are sold exclusively in ALDI’s stores, with the brand boasting two key blenders – the high performance model and the rocket blender. The former boasts a high-speed 32,000RPM blade speed with a massive 2L jug and 2000w motor. The rocket blender is for smooth fanatics and brings a 410w motor. It also comes with a set of four mugs for easy smoothie storage. While the prices change with each wave of Special Buys, ALDI did rate five stars on value for money and four stars for overall satisfaction. 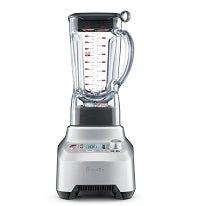 Breville is generally seen as a premium option when it comes to blenders, as most of its range is priced at least $100, with many exceeding $200. Expect sleek designs, high-power motors and easy-use functionality. There are no bright and colourful drink bottle blenders here. You’ll find stainless steel and black finishes, with serious blending in mind. Without a doubt the top dog in the range is the popular ‘The Boss’ blender, which boasts an LCD screen, auto-clean function, 2L jug capacity, 12 speed settings and powerful 2200w motor. It also sports a price tag of around $700. Breville was rated four stars for overall satisfaction in 2017, but only rated three stars on value for money. 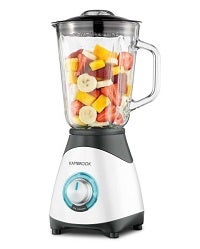 Kambrook is generally seen as a trusty and fairly-priced small kitchen appliance manufacturer. It produces a range of blenders that very rarely top the $100 price tag. In its range are ‘bullet’ inspired blenders aimed for making short work of veggies. It also features ‘Blitz2Go’ drink bottle blenders for smoothies on the go, with 300w motors for easy blending of fruits. Power-oriented models, on the other hand, feature 800w motors. While you won’t find any ‘super-powerful’ blenders in Kambrook’s blender range, you will find reasonable prices and blenders that likely suit a large number of consumers. Kambrook was rated four stars for overall satisfaction and in every other category. 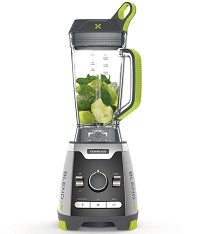 You might be more familiar with Kenwood if you have bought a car stereo recently, but it also produces blenders. Kenwood food blenders feature trendy and intriguing names like ‘XTreme’, ‘Blend X’ and ‘kMix’, with colour descriptions such as ‘Spicy Red’ and ‘Cool White’. Prices range from about $120 for the most basic ‘kMix’ blenders – good for making smoothies with basic functionality – up to around $400 for the premium ‘XTreme’ range, boasting 1600w motors and 2L jug capacities. Kenwood rated four stars overall, but did rate five stars on value for money despite not necessarily being a ‘cheap’ brand. This proves that you need to do more than offer a cheap price to satisfy customers. 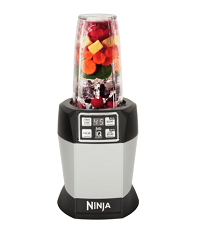 As a previous blender winner, Nutri Ninja still produces some exciting blenders and is arguably one of the brands that ignited the whole blender craze to start with. While its blenders used to only be available through selected channels, Nutri Ninja has expanded to be featured in many appliance stores across Australia. Nutri Ninjas boast ‘Auto IQ’ technology with easy blending, crushing and pause cycles. There is a fairly large range of blenders with motor powers ranging from about 700w for the basic smoothie blenders up to 1100w for the ‘Pro’ series. Prices range from around $50 for the most basic models, up to around $300 for the Auto IQ series. Nutri Ninja was rated four stars overall but did get top marks for other functions. 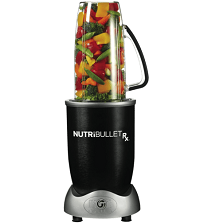 Another brand credited for igniting the nutrient blending craze, NutriBullet also made its name in TV infomercials. Nutribullet claims to be the world’s original nutrient extractor and lays claim to the impressive ‘Rx’ blender, which boasts a 1700w motor and heat cycle functions for making soups. This is a blender not just for smoothies, but for a range of meals where you’d normally need to pulverise veggies. The Rx hovers around the $400 mark, but NutriBullet does also have some cheaper blenders on offer if all you’re after is a blender for smoothies on the go. In 2017, NutriBullet was rated four stars overall, but did get top marks for ease of use and performance. 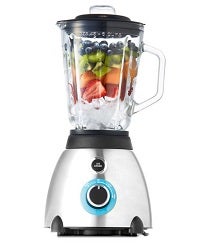 If you’re a ‘Kmart Mum’, you’d have no doubt seen Kmart’s series of food blenders. Known as the purveyor of ‘cheap and cheerful’ homewares, the Kmart Homemaker brand produces lots of different appliances, including toasters, kettles and yes – blenders. All of Kmart’s blenders can be found for under $60, with drink bottle blenders coming in at under $30. While you won’t get all the ‘whizz bang’ features like with other brands, you will still get adequately-powered motors from around 200w up to 1000w. Kmart Homemaker blenders were rated three stars for overall satisfaction but did record four stars on value for money, proving that it’s not always a cheap price that woos Aussie shoppers.

Canstar Blue commissioned Colmar Brunton to survey 3,000 Australian adults across a range of categories to measure and track customer satisfaction. The outcomes reported are the results from customers within the survey group who have bought a new blender in the last two years – in this case, 691 people.