Show Important Notes^* Hide Important Notes^*
* Overall satisfaction is an individual rating and not a combined total of all ratings. Brands with equal overall satisfaction ratings are listed in alphabetical order.
^ By clicking on a brand or ‘details’ button, you will leave Canstar Blue and be taken to our referral partner to compare. You agree that Canstar Blue’s terms and conditions apply to this referral. If you click on a brand that our referral partner does not cover, you will be taken to a brand page on Canstar Blue.
Canstar Blue research finalised in May 2017, published in May 2017. 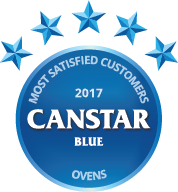 Bosch has retained its place at the top of Canstar Blue’s customer satisfaction ratings for ovens. In 2017, Bosch rated five stars across all research categories, including cooking performance, reliability, functionality and value for money.

Bosch back for more as top-rated oven brand

It’s probably been ages since you bought a new oven, but the fact that you’ve found this page suggests it’s that time of the decade again! A lot has changed since you last bought an oven, so picking the best appliance for your household’s needs is quite a challenge. However, our 2017 oven review and ratings should be able to help. If you want to know which brands are rated highest by Aussie consumers just like you, then you’ve come to the right place.

Based on a survey of more than 1,300 households across Australia, Canstar Blue has been able to compare 11 leading brands on factors such as cooking performance, reliability, functionality, design and value for money. For the second year in a row, Bosch has been rated highest of the bunch, scoring five-star reviews across every single research category. That’s quite some result.

It’s probably fair to say that the three oven brands mentioned above – Bosch, Fisher & Paykel and Miele – are some of the most premium (and therefore expensive) available. So what does that tell you? Perhaps that investing in a quality appliance will prove a sound financial move in the long run. If you’ve ever been frustrated by a temperamental oven, or just left disappointed by its performance, then it may be time to upgrade.

Seven out of ten Aussie households (70%) use their oven at least three times a week, our 2017 study found. If you’re one of them, make sure you give serious thought to which oven you buy next. Ovens are not the easiest of appliances to replace – especially after they’ve been installed – and you won’t want to be left with buyer’s remorse.

Let’s now get an overview of what each of the 11 brands in this year’s review have to offer. You can also click the brand logos in the table above to compare models at either Appliances Online or Winning Appliances.

Bosch is a well-renowned name in the appliance world, and the German manufacturing giant is synonymous with quality and technology. Bosch offers the Australian consumer a wide range of over 20 ovens, both electric and gas. Bosch puts technology at the forefront of its design ethos, with soft-open and close doors, a multitude of cooking programs and displays, as well as auto-pilot functions such as ‘PerfectBake’ and ‘PerfectRoast’. Bosch ovens generally come in at the premium end of the spectrum, with most above the $2,000 mark, but some can be found for a bit less. Bosch was rated five stars in every category in 2017.

Spanish for ‘white’, Blanco is a major provider of home appliances, with its ovens being quite popular. There are more than 10 Blanco oven models available to Australians, including gas and electric appliances, and even steam ovens on offer. Blanco’s most popular type of oven is the humble single oven, which generally boast large capacities, self-cleaning, night modes – which dim lights and silences buzzers after 10pm – and various safety and easy-clean features. Some Blanco models cost less than $1,000, but some cost around $3,000. Blanco was rated four stars for overall satisfaction and four stars for most other categories, except for cooking performance and ease of cleaning where it achieved three stars.

As the name suggests, Chef specialises in all appliances that cook, and in particular – ovens. Chef has been around for a while now, with a fair few models on the Australian market. Chef is known as a budget-oriented brand – similar to Simpson – with many models costing less than $1,000. What Chef seems to focus on is straightforward cooking with no gimmicks, with only a few models featuring pyrolytic self-cleaning. Chef was rated four stars for overall satisfaction and in one other category – value for money. It was rated three stars in every other category in 2017, including reliability, performance, design, functionality and ease of cleaning.

For all things ‘home appliances’ Electrolux remains a global leader. The Swedish brand is a giant in the appliances industry, producing all manner of ovens, including gas and electric, as well as pyrolytic and steam ovens. Many Electrolux models are very large in capacity, over 100L in fact. Most feature Swedish ingenuity in features like ‘IOI’ technology, which claims to eliminate the need for instruction manuals. Electrolux ovens come at a wide range of prices, some costing as much as $5,000, while others cost a comparatively modest $1,300. Electrolux was rated four stars for overall satisfaction in 2017, as well as value for money and ease of cleaning. It was just three stars in the other categories.

Founded in New Zealand, Fisher & Paykel is a company that has been around for more than 80 years. During that time, it has emerged as one of the most technologically-advanced appliance brands around and is a popular choice in Aussie kitchens. Fisher & Paykel has a huge range of ovens, with around 30 in total, split pretty evenly into gas and electric categories. It even makes pyrolytic ovens, but these fetch a price premium as you might expect, due to their self-cleaning nature. It’s also one of few brands to specialise in double ovens. Fisher & Paykel also has a wide variety of price ranges, with some ovens starting at around $800, with most around the $2,000 mark, while some cost $6,000 and more! This year, Fisher & Paykel was rated four stars overall, with five stars on value for money and ease of cleaning.

Miele is a well-regarded home appliance brand with many of its products still manufactured in Germany. Miele offers more than 30 different models of ovens in Australia, spread across both gas and electric ways of cooking, with a strong focus on durability and ease of use. Especially with the higher-end models, expect features like self-cleaning, easy-clean enamel finishes, cool-touch doors, multiple programs and functions, as well as ‘Flexiclip’ runners which allow you to baste and turn meat without risk of burning yourself. Miele has proved a hugely popular brand in Canstar Blue’s research over the years, but its prices are generally more expensive than most other brands, with some ovens costing $7,000 or more. Miele rated four stars in every category in 2017, with the exception of value for money where it achieved three stars.

Simpson is an Australian company known for making a wide range of white goods and home appliances, generally at budget-friendly prices. For over 100 years, Simpson has been based in Adelaide and manufactures a fairly concise range of ovens. Many feature large capacities, and short – but important – feature lists, consisting of things like pyrolytic self-cleaning, easy timers and functions, plus safety features such as cool-touch doors. Simpson has a reputation for being budget-friendly, which seems to have been reflected in this review, rated four stars on value for money, reliability and overall satisfaction. It was rated three stars for every other category.

Please note that since this review was published, Simpson has ceased selling ovens.

A subsidiary of Electrolux, Westinghouse still makes some quality ovens. Besides the traditional ovens that many know and love, Westinghouse produces pyrolytic ovens amongst its vast range of more than 30 models. Some are known for their big capacities, and kid-friendly features such as cool doors, child locks and fingerprint-resistance. Westinghouse is usually one of the cheaper brands around, with many ovens costing around $1,000. However, expect techy features at the cheaper end to be rather scarce. Westinghouse was rated four stars for overall satisfaction and indeed for most other categories, except for ease of cleaning where it was rated three stars.

Euromaid has been servicing Australians for over 20 years, with a focus on functionality. While you likely won’t see the latest gimmicks and marketing with a Euromaid oven, what you will probably see is tried and tested quality. Despite its name, Euromaid is totally Australian-owned, with an after-sales support centre in Melbourne. Euromaid has a pretty wide variety of ovens, with its most popular arguably being the 60cm variety, with the ‘7 Function’ series being one of the more popular specifically. Most Euromaid models come with sub-$1,000 price tags. Many 7 Function ovens feature large capacities – 80L or more – with a focus on simple and effective cooking. Euromaid was rated three stars for overall satisfaction in 2017, but rated four stars on value for money and ease of cleaning.

Omega is an appliance company specialising in kitchen appliances like microwaves, dishwashers and indeed ovens. Omega claims over 30 years of experience in the Australian market and its range of ovens is quite large. With many models made in Italy, Omega’s ovens typically boast large capacities built for families of four or six, and many models feature safe-touch glass and pyrolytic self-cleaning. Others come with auto-cooking functions, customisable racks and touch controls. Many ovens are priced around $1,000-$1,500, but expect the ‘Made in Italy’ models to fetch a slight premium. Omega was rated three stars in every category.

Smeg is an Italian appliance manufacturer providing “elegant contemporary living solutions” for Aussie kitchens. Many of its ovens are rather chic in appearance, with touch displays and sleek silver finishes. Many models feature countless ‘smart sense’ personal cooking programs, as well as advanced safety features. Oven capacities generally hover around the 80L mark, and prices are typically between $2,000 and $3,000. However, expect to pay more for pyrolytic varieties – around $4,000 – which boast 90-minute auto-cleaning times. This year, Smeg was rated three stars for overall satisfaction, and for every other category, except for ease of cleaning where it was rated four stars.
Our latest appliance reviews featured in a special 7 News report.

Buying an oven: Things to consider

As well as identifying which oven brands are rated highest in Australia, Canstar Blue’s research shows what drives customer satisfaction for consumers. There are lots of things to consider but it may also help to keep these results in mind:

Ultimately, you’ll want an oven that lives up to your cooking expectations, and doesn’t let you down at the end of a long, hard day. This review is based on the real life experiences of Aussie consumers just like you, so we hope you find this report helpful in your search for a new oven.

Canstar Blue commissioned Colmar Brunton to survey 3,000 Australian adults across a range of categories to measure and track customer satisfaction. The outcomes reported are the results from customers within the survey group who own an oven and have used it in the last 3 months – in this case, 1,321 people.