Do you live in SA and are looking for a better electricity plan for your home? Compare electricity providers, plans and rates in SA with Canstar Blue.

Show Important Notes^* Hide Important Notes^*
* Overall satisfaction is an individual rating and not a combined total of all ratings. Brands with equal overall satisfaction ratings are listed in alphabetical order.
^ By clicking on a brand or ‘details’ button, you may leave Canstar Blue and be taken to a referral partner to compare. You agree that Canstar Blue’s terms and conditions apply to this referral. If you click on a brand that our referral partner does not cover, you will be taken to a brand page on Canstar Blue.
Canstar Blue research finalised February 2017, published February 2017. 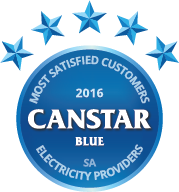 When it comes to electricity in South Australia, it’s all about trying to make the best of a bad situation. Not only have South Aussies been plagued by power blackouts in recent times, but they also pay the highest prices for electricity in the first place. While there is nothing Canstar Blue can do about the reliability of your energy supply, we can inform you about your energy options and help you find a better deal. This means comparing electricity providers, plans and tariffs, which this report will cover in detail.

But to kick things off, let’s discuss our customer satisfaction ratings for electricity providers in South Australia. Each year, we survey hundreds of households across the state to find out how they rate their providers based on factors including bill clarity, customer service and the value for money they offer. This year, Simply Energy has been rated highest, achieving five stars for overall customer satisfaction. The results were also positive for Lumo Energy, scoring five stars across most categories, but four stars overall. EnergyAustralia also rated four stars, while AGL and Origin both received three-star reviews. Simply Energy replaces Lumo Energy at the top of the ratings from last year, which seems to be a clear sign of how South Australians rate two of the challenger retailers compared to the big three. You can make up your own mind!

About the South Australia electricity market

Given the ridiculously high prices that South Australians pay for electricity, you would be forgiven for thinking there wasn’t much competition between providers in the market. The price of any product or service generally gets higher when there is no competition. However, this is not the case at all in South Australia as there are many different providers all fighting hard for new customers. The problem is the cost of electricity transmission and distribution, which these retailers need to pass onto their customers. However, the extent to which these costs are passed on to customers is the subject of much debate. South Australia is also heavily reliant on renewable energy generation, and during periods of extremely high demand – such as hot summer days – supply has occasionally failed to meet demand, resulting in blackouts.

Despite the competitive nature of the South Australian electricity market, latest figures from the Australian Energy Regulator show that 75% of households in the state remain with one of the big three power companies – AGL, Origin and EnergyAustralia. This will largely be because many households have not switched electricity providers since the market was deregulated in 2012. Deregulation resulted in many new providers entering the market, and means they are now free to set their own prices, plans and conditions. Previously, electricity prices had to be agreed with the Essential Services Commission of South Australia. While the removal of price regulations has increased competition between the retailers, the merits of it remain unclear, especially considering the high prices South Australians pay.

More and more electricity providers have been entering the South Australian market since it was deregulated. There are now 17 retailers operating in Adelaide and the surrounding areas. They are:

While some of these electricity providers offer several different market contracts, it should be noted that some only offer standard contracts, meaning they are unlikely to save you money.

There are two types of electricity contracts in South Australia – standard contracts and market contracts. Knowing the difference between them is the first step in reducing your energy costs.

Canstar Blue research shows that households in the Adelaide area stand to save hundreds of dollar a year simply by switching from a standard contract to a market contract, even with the same electricity provider, provided they stick to the conditions of their plan.

Once you’re settled on the type of contract you want, the next thing you need to understand is the charges you’ll face. Electricity prices can vary considerably between providers, so it literally pays to get to know these charges, and what cheap rates look like. The two charges that make up your electricity bills are fixed supply charges and usage charges.

It’s important to get to know these charges, which can be found in the energy price factsheet of your contract. Working out what represents ‘cheap’ rates can help you pick the plan that’s best for you.

With almost 20 different electricity providers in South Australia, you won’t be surprised to learn that there are plenty of plan options to consider. In their most basic form, energy plans fall into two categories – those with variables rates and those with fixed rates.

While some retailers play it fairly straight with their electricity plans, it’s common to see various promotional offers to get new customers to sign up. Simply Energy, for example, has a specific offer for RAA members, which brings an additional discount. Simply Energy also boasts a plan for movie lovers, bringing up to 32 ‘free’ cinema tickets throughout the contract period. Lumo Energy, meanwhile, has a rewards program whereby customers can get money off at various retail outlets and theme parks, while AGL customers can collect flybuys points through their bills. While tempting, it’s important to compare electricity providers in SA on their supply and usage rates before taking any discounts and incentives into account.

The majority of electricity providers listed above offer solar power plans, either as standalone products or as an add-on to existing offers. Until recently, the Essential Services Commission of South Australia set minimum feed-in tariff rates that the retailers must pay. However, retailers can now set their own minimum prices, meaning it’s important for all solar customers to review their offers and regularly compare deals from other providers.

While some electricity providers offer specific incentives in an effort to get you to sign up, most simply rely on attention-grabbing discounts to stand out from the crowd. It’s common to find plans boasting discounts of more than 20% off, but it’s important not to automatically assume that the biggest discounts mean the biggest savings. There are a few things you’ll need to know to get a good deal, including:

Tariffs are often the subject of confusion for electricity customers, but once you get to grips with what they are and how they work, you’ll realise that they can actually guide you towards cheaper bills. Across Australia, there are two main types of electricity tariffs – known as ‘single rate’ and ‘time of use’. Their difference is reflected by their names:

In South Australia, the vast majority of households have single rate tariffs, so the prices you pay for electricity will not depend on the time of day you use it. If you’ve been in the habit of using your washing machine, dishwasher or other major appliance late at night because you thought it would save you money, you are mistaken.

While some states have different single rate tariff options, in SA there is just one standard tariff for residential customers, but the way retailers use it can differ. This is called Tariff 110, but you may also see it referred to as ‘peak’, ‘domestic’ or ‘anytime’ on your bills. Tariff 110 comes with ‘block rates’, meaning the prices you pay for electricity will depend on how much you actually use, rather than when you use it. This basically means that your energy usage is split into daily blocks, with the first ‘block’ of power (typically around 11 kWh) usually charged at the lowest rate (say, 32c per kWh). Where retailers differ is that some will split usage up into just two daily blocks (the second meaning higher prices of, for example, 36c per kWh), while others split their usage charges into multiple blocks, with prices getting gradually higher. You will find plans with as many as five different block usage rates during the day, with Alinta Energy probably the most prominent retailer to follow such a pricing structure.

In additional to your primary tariff (single rate or time of use), you may also have a controlled load tariff. A controlled load is a separate metred circuit to the rest of your property, which means you can be charged a different rate for major appliances, usually your electricity hot water system or pool pump. A controlled load tariff (also known as Tariff 116 in SA) will be much cheaper than your primary tariff, usually costing less than 20c per kWh. However, the catch is that power will only be supplied for a few hours each day.

Also be sure to check your energy price factsheet for ‘demand’ charges. Some retailers adjust their pricing between summer and winter, meaning you are charged higher rates in summer – when there is more demand for energy – and lower rates in winter. AGL is probably the most prominent retailer for seasonal pricing.

How to get the best deal on electricity in SA

If you haven’t worked it out yet, finding the best electricity provider and plan for your specific requirements is extremely tricky. The fact is that there is no one-size-fits-all solution to energy costs in South Australia. Instead, you will need to work out which offer best meets your needs based on primarily:

You should also keep in mind that the ‘cheapest’ electricity provider doesn’t necessarily mean the ‘best’. Our ratings are based on customer satisfaction, rather than just cheapest rates. Our cost comparison report for SA electricity providers, however, is a useful guide to which retailers generally offer the cheapest deals.

Realistically, if you haven’t switched electricity providers for two years or more, you are almost certainly paying more for power than you need to. This is because the cheapest deals are made possible by the conditional discounts we discussed previously. Even if you’re satisfied with your existing provider, it’s worth reviewing your options and challenging them to match the discount they offer new customers. The power is always with new customers, so if you’re ready to save money on your electricity bills, it’s time to get proactive.

Canstar Blue commissioned Colmar Brunton to survey 6,000 Australian adults across a range of categories to measure and track customer satisfaction. The outcomes reported are the results from customers within the survey group who live in South Australia and pay the electricity bills in their household – in this case, 778 people.