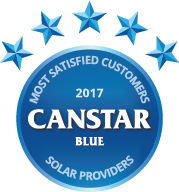 So you invested in solar – great! But that’s just the start. Now you need to find an electricity company to help you maximise the true value of your solar system. Unfortunately, only about half (54%) of the solar power customers Canstar Blue surveyed in 2017 think they get a good deal on energy. This is probably not helped by the fact that almost three quarters of them (73%) haven’t switched electricity providers in at least five years, while only 45% have made the effort to compare plans in the past 12 months.

So, where do you start with finding the best deal on solar power? The first step is to educate yourself about your energy needs and options – and that’s where Canstar Blue can help. We start by comparing some of Australia’s leading solar power retailers with our customer satisfaction ratings. For the second time, we’ve canvassed the opinions of solar customers right across Australia, asking them to rate their solar company on key variables including customer service, bill clarity, tools and advice, tariff clarity, and most importantly of all, overall satisfaction. So, who offers the best bang for your rooftop solar buck?

In 2017, Lumo Energy has been rated highest for overall solar satisfaction, scoring five stars in almost all research categories, including solar tariff clarity and value for money. It was four stars overall for Click Energy (the top-rated retailer in 2016), as well as EnergyAustralia, Ergon Energy (regional QLD only), Red Energy and Simply Energy. Three stars went to AGL, Origin Energy and Synergy (WA only). Keep in mind, however, that our solar customer ratings do not include all solar providers in Australia, with retailers required to receive a minimum of 30 survey responses to be included in this review. While it’s safe to assume these are amongst the biggest providers, some smaller and specialist solar companies may also be worth considering.

Is solar a good investment?

There are countless factors to consider when it comes to whether or not solar is a wise financial investment, but if you’re looking for some high-level guidance, our survey found that:

So whether you’re considering installing solar panels, or just looking to boost the value of your current operation with a better deal from a retailer, here is a guide to help you along, including details of the solar feed-in tariffs available in your area. Our survey found that only 50% of solar customers are happy with their existing feed-in tariff. If you know the feeling, it could be time to do something about it.

There are two key incentive schemes available to most solar customers in Australia that help improve the value of your investment – these are feed-in tariffs and Small-scale Technology Certificates (STCs). When a household installs a solar system, it will receive a number of STCs. The amount awarded depends on the customer’s location, as well as the generator size. These certificates can be sold for cash, potentially amounting to a substantial reduction in costs for your system.

Unless you have a solar storage battery, any excess electricity produced by your rooftop solar system will be fed into the energy grid for your retailer to then sell on to other customers. For each kilowatt-hour (kWh) of electricity that a solar system exports, your solar company credits you a small rebate called a ‘feed-in tariff’ (FiT). This is also referred to as a ‘buy-back’ rate.

In an effort to boost solar power uptake, most state governments introduced a range of solar schemes, offering bonus feed-in tariff rates of up to 60c/kWh to customers who installed solar early on (generally before 2012). However, there have been a number of significant changes to these schemes recently. At the end of 2016, the New South Wales Solar Bonus Scheme came to its natural conclusion and NSW customers stopped receiving feed-in tariff rates of 20 or 60 cents per kWh. The silver lining for solar households in NSW is that most energy retailers have increased their basic feed-in tariffs following recommendations from the Independent Pricing and Regulatory Tribunal (IPART). The IPART benchmark increased from 5.5–7.2c/kWh to 11.6-14.6c/kWh from July 1, 2017.

It’s much better news for Queenslanders as their state government has committed to upholding its Solar Bonus Scheme until 2028. Meanwhile solar bonus schemes in South Australia were somewhat reduced in 2016. However, SA customers may still receive a 44c/kWh feed-in tariff until 2028, while some Victorian households will still receive 60c/kWh until 2024.

It’s important to understand that the Solar Bonus Scheme is closed to all new customers. This means that if you have recently installed solar panels, or you plan to soon, you will not receive a premium feed-in tariff, only the basic FiT of about 6 to 12 cents per kWh, depending on your location and retailer. However, some solar companies are now offering seemingly generous rates of their own to attract new customers.

Solar has become a competitive space for energy retailers, with some trying to give themselves an edge by offering higher feed-in tariff rates. Below is a list of retailers and what feed-in tariffs they offer across the major states. Keep in mind this list does not include all retailers, so be sure to shop around and keep all your options open.

*Synergy only services the SWIS network. WA Customers connected to the Horizon network may receive a FiT that varies considerably.

You may think that this year’s top-rated solar retailer, Lumo Energy, doesn’t offer the highest feed-in tariff on the market. However, you need to keep in mind that high feed-in tariffs may just be masking overly high electricity usage or supply rates. That’s why it’s important to compare all energy rates when determining which provider and plan works out best for you.

The difference between net metering and gross metering is important, particularly for NSW customers who recently stopped benefitting from the state’s Solar Bonus Scheme.

Because the price of electricity usually exceeds the buy-back rate on solar, it’s generally advised that customers remain on a net metering setup. That said, those who still receive a premium tariff on a Solar Bonus Scheme will often save more with gross metering.

Many NSW solar customers that received premium tariffs used gross metering, but with the state’s bonus scheme now concluded, customers should reassess and perhaps switch to a net metering arrangement. To do this, you will need to have a smart meter installed if you don’t already.

Installing Solar: What to Consider

Most Australians are by now well aware of the advantages of solar power. That said, it’s not necessarily a good investment for everyone. If you’re yet to install solar, here are a few key points to consider:

Solar is set to reshape Australian energy in the coming decades, and it’s quickly becoming a key battleground for energy companies. We are seeing providers getting increasingly creative with their plans. Diamond Energy, for example, recently introduced its GridCredits100, which gives eligible solar customers up to 100c/kWh for electricity at times of high network demand.

Some retailers have also experimented with variable rate feed-in tariffs, where the rate you receive for your solar-generated electricity will vary depending on current wholesale prices.

A solar storage unit is a battery capable of storing the electricity your solar panels produce, rather than having it exported to the energy grid. Solar battery technology has improved considerably in recent years, and new residential products such as the Tesla Powerwall, Ecoult Ultrabattery and Aquion battery have all helped bring the technology to the mainstream market. You can see a detailed list of solar batteries available in Australia here.

Solar storage batteries remain fairly uncommon. That said, six out of ten respondents to our 2017 survey (60%) said they aspire to go 100% off the grid. To do so, you will need a significant storage capacity.

Solar customers that receive a poor feed-in tariff stand to save the most with a solar battery. That’s because, by storing electricity for later use, the customer is saving the price they would have paid for electricity. This is often a saving of 20 to 30 cents per kWh, rather than the 6 to 10 cents they might have received with a feed-in tariff.

Unfortunately, solar batteries remain quite expensive in Australia, costing upwards of $8,000 to purchase and install. At present, that means a solar battery might end up costing you more than you will save, though that will depend on the size of your solar system as well as the price you pay for electricity.

How to get the best value from solar

A growing number of Aussies are turning to solar to escape rising power prices. Recognising this, more and more electricity companies are focusing on products designed to help solar customers save. Households with solar panels now have an unprecedented number of options available to them, meaning it’s more important than ever to frequently compare energy products. It also means that you need to be increasingly wary of traps – while a particular plan might include a very juicy feed-in tariff, this may be compensated for with increased electricity rates or smaller discounts.

When comparing providers, be sure to look at their Energy Price Factsheets and ask plenty of questions if you’re unsure about any of the terms. Just like all energy users, solar customers shouldn’t just set and forget. Make sure you regularly compare providers and offers to find the best deal for your personal circumstances.

Canstar Blue commissioned Colmar Brunton to survey 9,000 Australian adults across a range of categories to measure and track customer satisfaction. The outcomes reported are the results from customers within the survey group who have a solar power electricity account and pay the bills – in this case, 978 people.