You are viewing the archived ratings for Fresh Milk. Go to the current Fresh Milk ratings 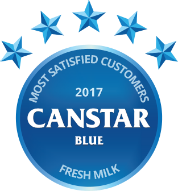 Norco and PURA rise to the top of milk ratings

The milk section of Aussie supermarkets has become a key battleground for Coles, Woolworths and ALDI in recent years. As a basic grocery staple that consumers tend to drop in store for on a regular basis, the supermarkets know the quality of their milk needs to be good – and they also can’t afford to charge too much. The price of basics like milk helps determine where almost half (45%) of Aussie consumers shop, our latest survey found. In addition, just over half (53%) would switch supermarkets if they could buy their staples cheaper elsewhere. The supermarkets know the importance of their milk aisle, which is why you can pick up a litre of the white stuff for just a dollar at Coles, Woolworths and ALDI.

While the downward pressure on milk prices may be good for consumers, it’s not quite so good for the dairy farmers who supply the supermarkets. The issue was highly publicised in mid-2016 and led to many people boycotting $1 per litre supermarket milk. According to one report, sales of supermarket milk fell from 65% of all milk sold to 50%. Our survey found that more than two thirds of consumers (68%) would be happy paying more for milk if it helped local farmers.

At Canstar Blue, our aim is not to judge consumers on the type of milk they buy – or how much they pay for it – but to report which brands are rated highest across the country based on their taste, freshness, value for money, packaging design, and overall customer satisfaction. In 2016, Devondale was highest rated overall, but this year two brands share the title – Norco and PURA.

Norco and PURA both earned five-star reviews from consumers for packaging design, taste, and overall satisfaction. They also rated four stars on freshness and value for money.

Norco is an Australian-owned farmer co-operative where all profits are said to go back to its farmers. Norco has been producing milk in NSW and Queensland since 1895, and its product range also includes a number of flavoured milks, as well as creams, cheeses and butters.

Along with Dairy Farmers, PURA is a Lion-owned milk brand. Its product range includes PURA Original, Light Start (with 1% fat), Tone (high in protein & calcium) and ‘HeartActive’ (which is claimed to reduce cholesterol by an average of 10%).

The only other five star reviews in this year’s ratings came from:

There were mixed results for the supermarket private labels, with Coles and Woolworths rating three stars overall. However, ALDI Farmdale received a four-star overall review, as did Woolies’ Farmers’ Own brand. It was also three stars for Brownes, Pauls, Zymil and a2 Milk, while Harvey Fresh, Devondale and Dairy Farmers all rated four stars.

It seems unlikely that supermarket label milk prices will rise anytime soon, leaving consumers with a choice to make. You can pay the bare minimum for your milk, or splash out a little extra if you believe the extra quality to be worth it. Our ratings would suggest the extra money may be worth it, but that’s ultimately a decision for you and your budget.

If supporting local dairy farmers is of importance to you, be sure to do your research and go for a milk brand you’re happy supporting.

Canstar Blue commissioned Colmar Brunton to survey 3,000 Australian adults across a range of categories to measure and track customer satisfaction. The outcomes reported are the results from customers within the survey group who have purchased and consumed fresh milk from a supermarket or grocer in the last 3 months – in this case, 2,066 people.