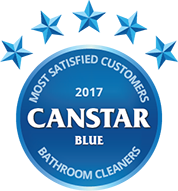 Jif has been tried, tested and approved by Australian consumers, rating five stars for bathroom cleaning satisfaction. It was the only brand to score top marks for effectiveness.

In a jiffy! Jif scrubs up best in the bathroom

Think of the bathroom like a glimpse of how someone lives their life. Bathrooms can be so personal – from the fittings, towels, decorations and array of health and beauty products – and having a clean bathroom can leave a good first impression for the in-laws, guests or potential lovers. However, it’s easy to let bathroom cleaning slip by the wayside. It starts with a bit of soap scum in the shower, and before you know it your bathroom needs a cleaning overhaul.

The bathroom is a sensitive topic among families at the best of times, not discounting the fact that having a dirty bathroom can cause tension among family members. From hair in the drain, to facial hair in the sink and random nik naks out of place, it’s no wonder the bathroom can be a contentious area. Not only that, a bathroom is generally a humid and damp place, which makes it a perfect breeding ground for mould and other bacteria to grow!

As such, regular cleaning is required to keep the germs out and the family at peace. However, not all bathroom cleaners are made equal. That’s why Canstar Blue has surveyed more than 2,000 Australian adults to find out which brands are best at blasting the bathroom bacteria.

As you can see from our ratings table above, Jif was the only brand to rate five stars overall. It was also the only one to score top marks for effectiveness! Other brands earned five stars in other areas, but when it comes to cleaning, it’s really all about effectiveness.

Canstar Blue commissioned Colmar Brunton to survey 3,000 Australian adults across a range of categories to measure and track customer satisfaction. The outcomes reported are the results from customers within the survey group who have purchased and used bathroom cleaner in the last six months – in this case, 2,233 people.

The Jif brand includes a wide range of different spray cleaning products, including its Power & Shine bathroom cleaner which Aussie consumers were obviously impressed with. In addition to five stars for effectiveness and overall satisfaction, Jif was rated four stars in every other research category.

Part of the Colgate-Palmolive group, Ajax’s bathroom power cleaner comes in a seemingly easy-use spray bottle, and is useful for grime, soap scum and rust stains. This makes it perfect for easy, general bathroom cleaning and for older sinks and taps that perhaps suffer from rust. Ajax was a solid performer in these ratings, earning four stars for overall satisfaction and most other categories.

Discount supermarket chain ALDI also has a range of cleaning products, with a strong presence in the bathroom cleaner segment. It was one of only two brands to achieve five stars on value for money, while earning four stars for overall customer satisfaction and every other category.

Dettol was also a fairly solid performer, earning four stars for overall satisfaction and likewise in most categories, excluding value for money where it rated three stars. It has a range of products for all surfaces in the bathroom, and not only gets rid of grime, but also disinfects. It was rated four stars for ease of use, which is likely for its spray bottle disinfectants.

Domestos is perhaps another brand with a conscience. It has partnerships with Unicef and other organisations to promote sanitation and hygiene in developing countries. Its bathroom cleaning products performed solidly, with four stars overall and four stars in many other categories. If you’re concerned about sanitation and hygiene issues abroad, then Domestos could be the brand for you.

Harpic has a large range of products for every bathroom application imaginable. From easy-clean toilet wipes, to powerful disinfectants and cistern and pipe cleaners, Harpic has you covered. However, Australians gave Harpic a mixed bag of results, giving it four stars overall satisfaction but three stars in several other categories.

Eco-conscious Earth Choice was perhaps unsurprisingly the only brand to achieve five stars for environmental friendliness. Earth Choice is free of harsh chemicals like ammonia, and is also septic and grey water safe. That doesn’t mean it’s a slouch in the cleaning department though, recording four stars for effectiveness. It also earned five stars for ease of use and product design.

Aussie-owned Orange Power relies on all-natural ingredients in its household cleaning products. It was born out of a realisation that orange peel has effective cleaning properties. It performed solidly in our ratings, with four stars for overall satisfaction and five stars on smell for its orangey scent.

Pine O Cleen represents a solid all-round performer, as the brand earned four stars in every category, including overall satisfaction. Pine O Cleen has a large range of household cleaning products for the toilet, floors, shower and all kinds of surfaces. Its products are available in a variety of scents and many come in easy-to-use spray bottles.

Shower Power – an OzKleen product – performed quite well overall, but stood out for ease of use, where it achieved five stars. Its spray bottle is available in four fragrances, and is best designed for soap scum and various grime around taps and sinks.

Most famous for being a go-to window cleaning product, Windex also offers a range of bathroom cleaners. Its range includes disinfectant sprays, perfect for getting rid of nasty bacteria. Australians were fairly satisfied with Windex as the brand earned four stars overall. It stood out with five stars for ease of use and product design, making it a great brand to shoot for if you’re looking for convenience and no fuss.

White King is a household name for cleaning bathrooms. It has a large range of cleaners for the shower and toilet, as well as do-anything bleach products for white porcelain. White King had a mixed bag of results, achieving four stars overall and three stars in a few categories.

Woolworths has a variety of cleaners suited for the bath, shower and toilet. The fresh food people performed quite well, earning four stars for overall satisfaction and five stars on value for money, ease of use and product design. Many of the retail giant’s products come in an easy-to-use spray bottle, which undoubtedly contributed to the five stars for ease of use and product design.

Coles has a range of different bathroom cleaners, as well as cistern cleaners. Its prices are dirt-cheap but evidently that wasn’t enough for Australian shoppers. While the supermarket brand earned four stars with regards to value for money, it earned three stars in every other category, including overall satisfaction.

Easy Off Bam was another brand to achieve a mixed bag of results, earning three stars for overall satisfaction. However, it did achieve four stars for effectiveness and ease of use. This is likely due to its easy-use grime and soap scum spray bottle cleaner.

If you want bathroom mould to exit your life, then Exit Mould may be for you. It specialises in anti-mould products, including an easy-use spray bottle designed to reach nooks and crannies. However, this specialisation was not enough for shoppers as Exit Mould achieved three stars overall. However, it did earn four stars for effectiveness, ease of use and product design – noteworthy considering its overall satisfaction rating.

Mr Muscle was evidently having an off-day in the gym, as it achieved three stars overall, and indeed for every category. Mr Muscle is perhaps most well-known for its ‘Drano’ products, which makes unclogging drains a snap. It also has a variety of surface spray bottle cleaners as well as toilet cleaners.