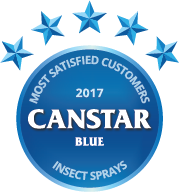 In our 2017 review of insect sprays, ALDI Atlas and Pea Beu have both been rated five stars for overall customer satisfaction. They both received five stars for effectiveness, with the ALDI brand also scoring marks on value for money.

Killing bugs is nothing to be proud of, but it is part of everyday life when you live in Australia. If you don’t mind spiders, cockroaches and their friends hanging out under your feet, then that’s your business. But if they bother or concern you, you can always reach for a can of bug spray to quickly see them off. However, like many Aussies, you may have experienced an occasion when your bug spray of choice has not actually lived up to expectations – rather just leaving you with a terrible smell to slowly drift off over the next couple of hours. If you know the feeling, you’ll be interested in our 2017 review and bug spray ratings.

This year’s survey of more than 1,900 adults who have bought and used bug spray over the last six months found that:

So, which brands can you really trust when you need them most? For the second year in a row, ALDI Atlas bug spray has been rated five stars for overall customer satisfaction by consumers, in addition to effectiveness and value for money. However, in 2017, ALDI Atlas is joined at the top of the ratings table by Pea Beu which earned five star reviews for overall customer satisfaction, effectiveness and ease of use.

It was four stars overall for Coles, both Woolworths brands, Mortein and Raid, while Black Flag and Black & Gold both earned three star reviews from consumers. It should be noted, however, that Mortein and Raid both rated five stars for effectiveness.

It is quite telling that only Pea Beu rated higher than three stars for scent. If you want to kill off bugs, you’ll likely need to hold your nose while you do it.

ALDI Atlas bug spray comes in a few different varieties depending on your specific bug-zapping needs. Standard insect spay for the likes of spider and cockroaches comes in a 350g can, priced at $2.99 (pictured). You’ll also find an ALDI Atlas bug spray for flying insects, as well as a surface spray to hopefully ward off creepy crawlies before you even see them.

Pea Beu is probably one of the most recognisable bug spray brands on supermarket shelves and provides a number of different products to suit specific insect-related needs. Its flagship spray (pictured) typically costs around $5 for a 350g can. It’s also available with a lemon scent to take the edge off! This may explain why Pea Beu was the only brand in our review to rate four stars on scent.

This year, we asked survey respondents which creepy crawlies they fear most around the house and there are no prizes for guessing that spiders ranked highest on the list! If you’ve ever faced down a Huntsman that sneaks out from under your TV cabinet late at night, you’ll know exactly what we’re talking about. More than a third of adults (38%) named spiders as their greatest bug fear, followed by:

The likes of ants, flies, moths and silverfish added up just a few per cent between them, while a brave 23% of respondents claimed no fear of any bugs. They did, however, still buy insect spray in the last six months. If you have no problem with spiders and their buddies, while not just pick them up and put them outside? Then we’ll see how unafraid you really are!

Canstar Blue commissioned Colmar Brunton to survey 3,000 Australian adults across a range of categories to measure and track customer satisfaction. The outcomes reported are the results from customers within the survey group who have bought and used insect spray in the last 6 months – in this case, 1,996 people.